This relatively easy, 3-mile roundtrip down to Borrego Palm Canyon takes you into a rocky canyon to one of the last remaining naturally occurring native California palm groves left on the planet. This is a fascinating hike for amateur botanists and geologists, and desert hikers will be rewarded with a surprising amount of water along the trail. There’s a free pamphlet at the trailhead that will help identify items of biological and historical note along the way. A highly recommended hike to anyone visiting Anza-Borrego Desert State Park.

The trail to Borrego Palm Canyon is a popular route for day hikers and casual strollers, and it would be easy for more “hardcore” hikers to overlook. It’s short, it often has a healthy amount of trail traffic, and it’s located just outside of one of the two main reservation campgrounds in Anza-Borrego State Park. But, even if you’ve already been down the similar oasis trail in Hellhole Canyon, Borrego Palm Canyon is definitely worth a stop on your trip.

The trail itself starts at the end of a paved road west of the Borrego Palms Campground, the main campground for the north / western part of the park. The trailhead itself is very clearly marked, and the parking area had plenty of spaces when I was there. After you set foot on the the trail, you’re immediately greeted with a sign warning you how hot it can get in this canyon — this is your last chance to head back to your car to get more water. Make sure you have more than you think you need. 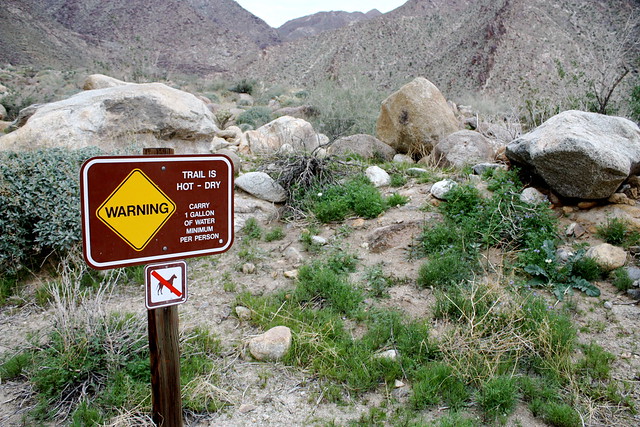 The trail begins following some “landscaped” paths, lined by boulders, and heads northwest toward a small creek / wash that runs through the canyon. At first glance, it can look pretty desolate, especially if you’re hiking on a cloudy morning like I was: 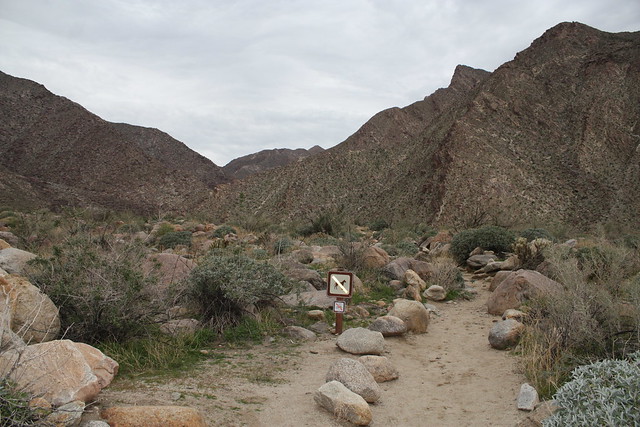 But … as I was hiking at the beginning of the desert’s wildflower season, the normally hidden desert life had no qualms about making its presence known. Flies and bees were buzzing in the distance, headed toward the early-blooming flowers that started popping up on the trail as I got closer to the creek: 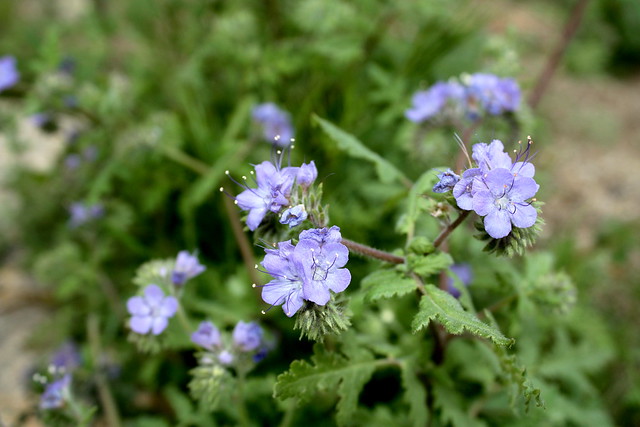 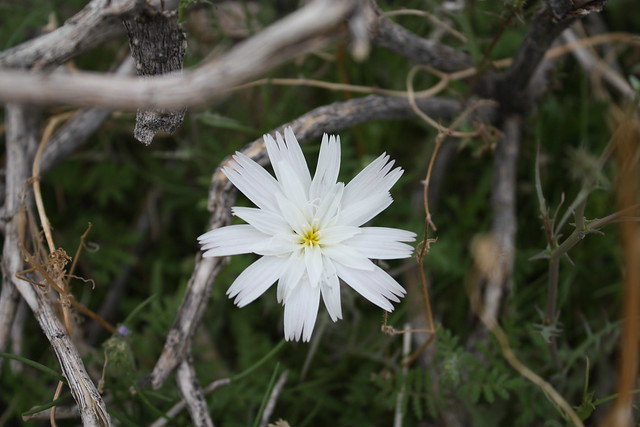 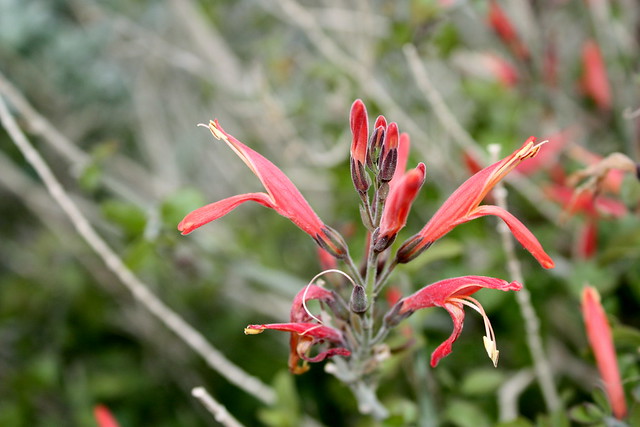 While climbing over some of the low rocks and boulders, I passed one that was covered in a swarm of ants — which are much larger out here than in L.A. And just as I passed over this rock, I heard the distinctive, squeaky call of two quails hopping down a side wash, headed toward the ants. Another hiker and I saw the birds and remained perfectly still as they walked toward us on their way to their six-legged snacks. 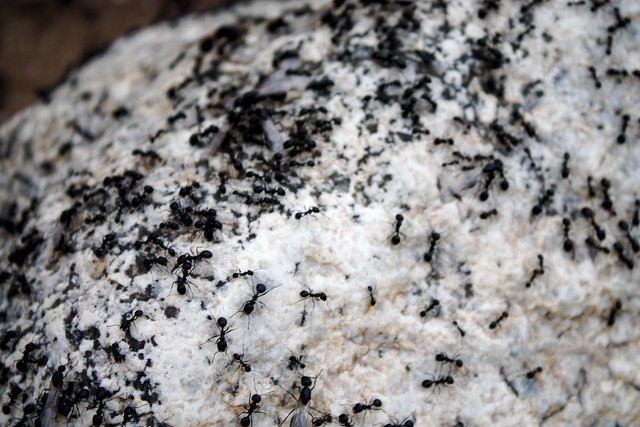 The trail meanders through some of these low boulders and ocotillo cacti for about 0.4 miles when it reaches the creek for the first time. Cross the creek, looking for the sign that marks the trail on the opposite bank. It shouldn’t be that difficult, as the water level is generally pretty low. You are in the desert, after all. 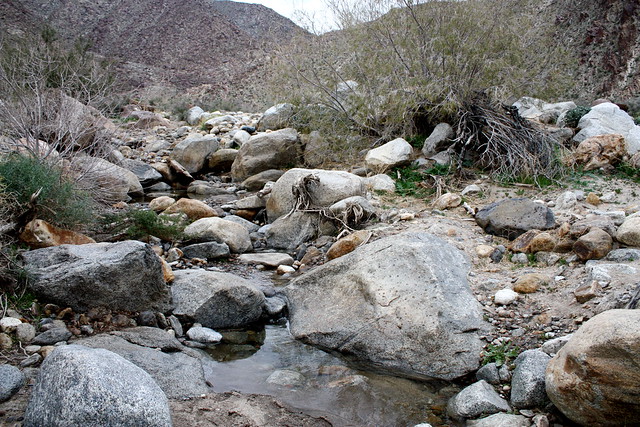 After crossing the creek, the trail becomes a bit faint, and there are often several other use-trails headed in the same direction. As is often the case with canyon trails, it really doesn’t matter if you get slightly off track. As long as you’re between the two canyon walls, you’ll be fine.

Continue heading west for just under 0.1 miles, when the trail makes a sharp turn north, following the canyon walls once again. Here, there is a use-trail that crosses the creek again. While you can take this, the actual trail veers to the right down a sandy side-wash paralleling the creek. Take this route instead, looking for the trail markers and boulder-hedges along the way: 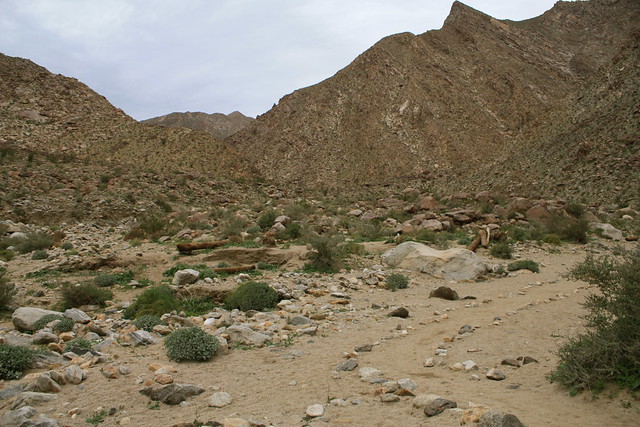 For the next 0.4 miles, the trail follows an indistinct path along a sandy section of the side wash, occasionally hopping over boulders and other debris. If you’re lucky, you’ll come across a few blooming flowers hidden between the rocks: 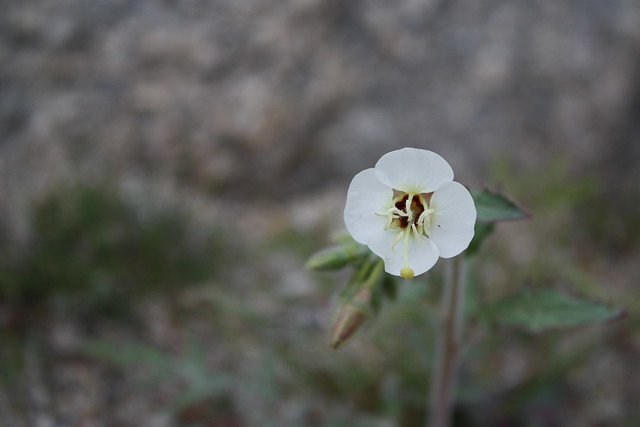 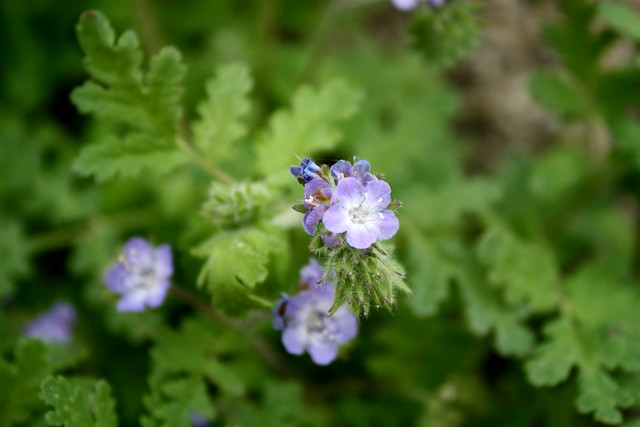 If you’re even luckier, you might come across some on-the-trail folk art: 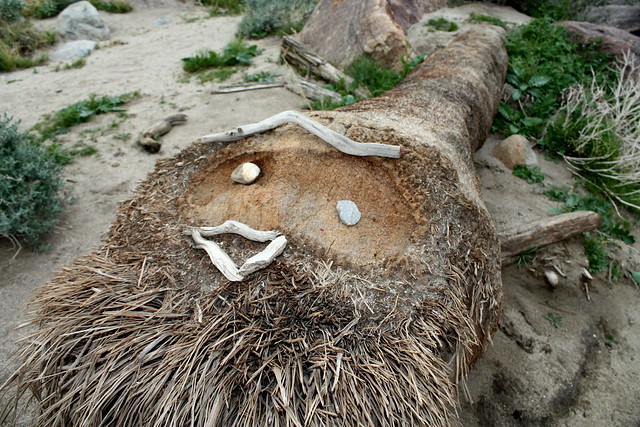 If not, cross the creek again at the one mile mark, following the trail along the bank. You’ll note the volume of water increases a bit as you get deeper into the canyon, and the patches of green get more expansive inside the desolate canyon. 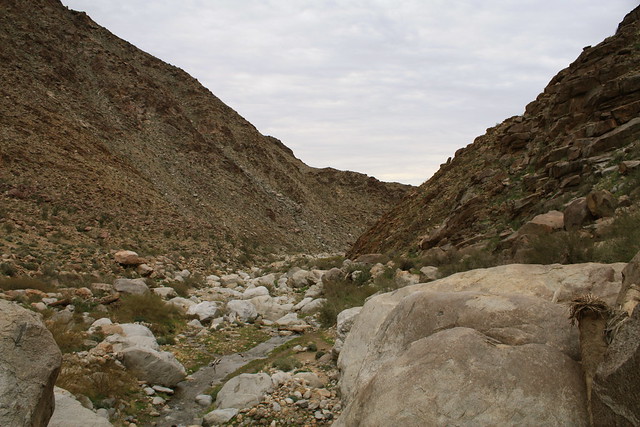 In another 0.1 miles, you should be able to start seeing the tops of the palm trees from the trail. After climbing up a short stone staircase built by the CCC and hopping across the stream three more times, you will enter the Borrego Palm Oasis, a landscape that stands in lush, incredible contrast to the rest of the surrounding desert: 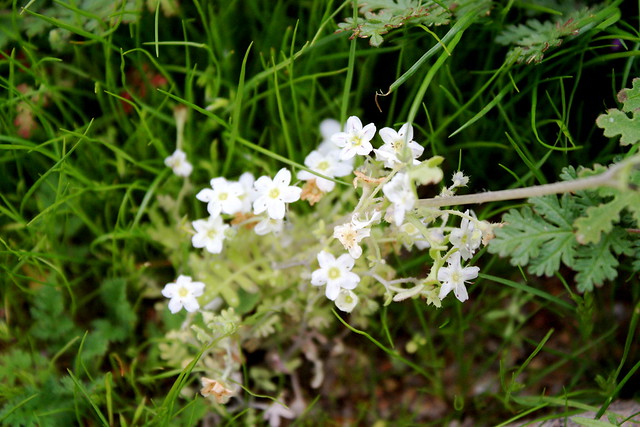 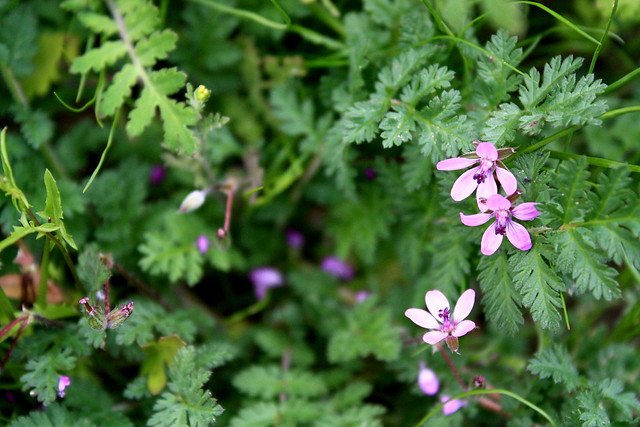 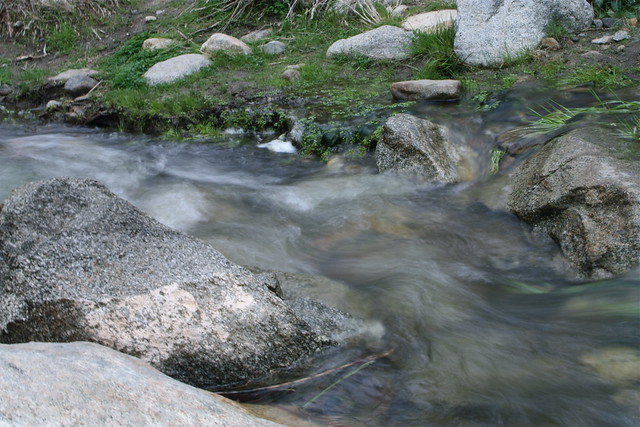 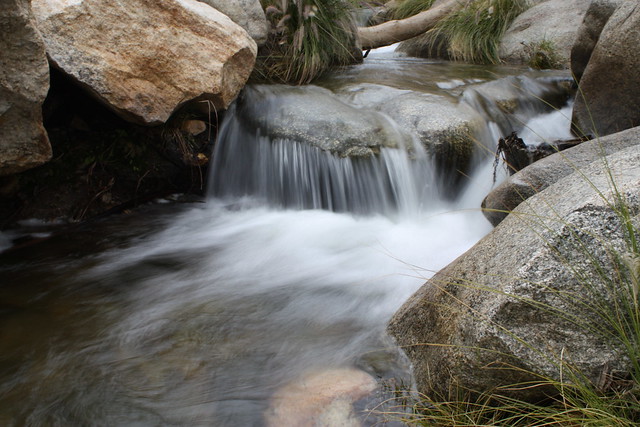 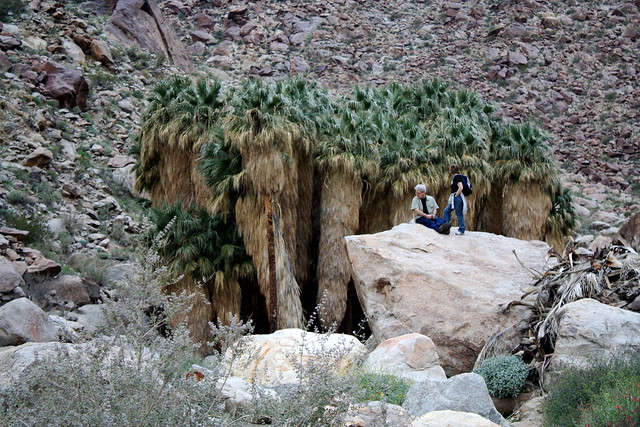 The palm trees themselves are very impressive. They seem larger and taller and … somehow … mildly more majestic than the bushy twigs that line boulevards all over L.A. Maybe it’s because they’re untrimmed, or because it has something to do with the fact that they’re out here in the middle of the desert, growing as they were meant to. But these are some palm trees I can actually respect.

Unfortunately, in January 2020 a fire burned most of this beautiful native palm oasis to the ground. Ecologists are confident the landscape will recover, but it may be several years before they start looking as majestic as they did before. 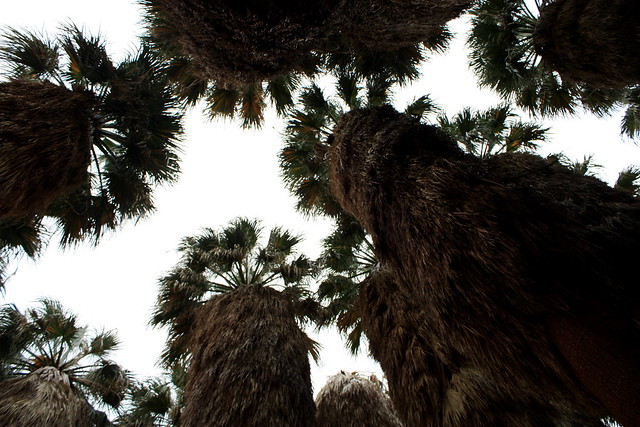 After you’ve had your fill of the palms and shade, return the way you came. More adventurous types can continue boulder-hopping and scrambling down the canyon to a few more palm oases, and – if you stick to the Middle Fork of the canyon – eventually enter the Los Coyotes Reservation and a few group campsites. But that is a very long trek that you should be completely prepared for. Most hikers will be more than pleased with the first palm oasis.

Very good. While sections of the route are indistinct, there are plenty of markers and guide posts set up along the way. Plus, as with most canyon trails, it's very easy to figure out where the main canyon is once you're in it. Don't go up any of the much more difficult side canyons, and you won't get lost.

The trail begins in Borrego Palm Canyon Campground, one of the developed sites within Anza-Borrego. There is also free dispersed camping throughout the park, provided your car is at least one car-length off the road, you don't go off established roads, you keep fires in a metal container, and you pack out your ashes.

From November, $10 fees are now required on Fridays, Saturdays, Sundays and holidays.

99% sure you can go through the campground and park at the trailhead without any passes. Anza-Borrego itself doesn't have any entrance fees or anything like that.

Thanks. Do you need any type of park or trail pass?

Just up there 2-27-17 , water was flowing ,,, high 60s air temp . One hiker saw BH sheep earlier in the day 20 yds away .
go up on the wide sand path start , not the rock hopper trail to the south west . you can go with about any shoes .
The extras like sticks and a big hat / water .... short boots or running shoes would be nice . You get tired , take shorter steps .