A short and easy – yet still exciting – hike in the Bear Gulch at Pinnacles National Park. The trail travels through forest, cliffs, two caves, a man-made lake, and some of the spectacular Pinnacles formations. This is a great hike for all ages and most hiking abilities, and it highlights some of the more interesting areas of the park. Flashlights are required for the caving portion.

While both the Bear Gulch hike and the nearby Condor Gulch hike are both easy, accessible trails in Pinnacles National Park, and while both are very nice trails that are great hikes, if you’ve only got time for one, skip Condor and head straight for Bear Gulch.

The trail starts at the end of a road just past the Bear Gulch Day Use Area, and is marked by a large bulletin board on the south end of the parking lot. Be sure to check this sign before you start hiking – the caves are occasionally closed when the local bats are raising their young ones. If all’s clear, head up the well-shaded trail as it slowly climbs above the shallow creekbed at the bottom of Bear Gulch. 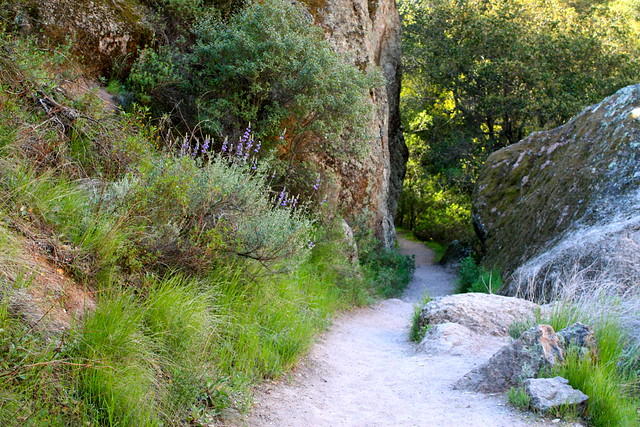 The 0.2 miles from the trailhead to the junction with the High Peaks Trail starts out in fairly unremarkable geology, but it quickly becomes apparent that you’re in a very geologically interesting area as the cliffs start to close in around you, exposing their almost artificially angular forms. 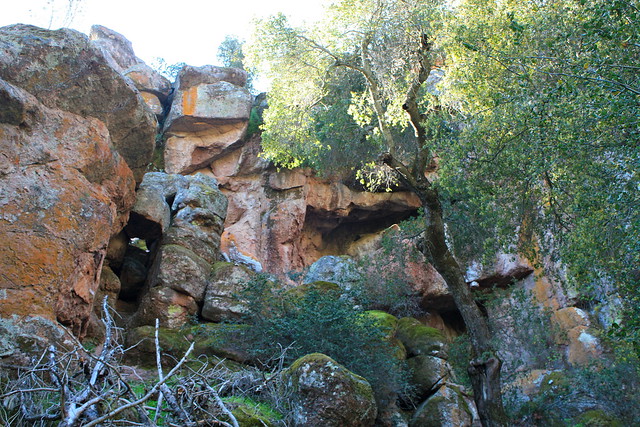 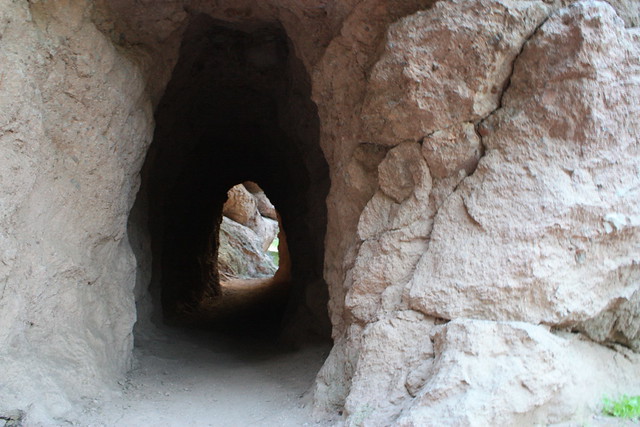 After a few short caves, you’ll come upon a trail split. One route will take you beneath the talus boulders that form Bear Gulch Cave, while another will keep you in the daylight and instead take you over the cave. Both routes are actually pretty great. Since neither of them is very long, I recommend trying to double back and do them both, or just take the cave up to the halfway point, then come back out and head up the other route. When I was there, the upper portion of the cave was closed, so I doubled back and redid the route through the cave after exploring above them.

If you head above, you’ll be greeted with some phenomenal views of the giant chunk of earth known as The Monolith. These pictures don’t do it justice — this thing is HUGE. To give you a sense of scale, that cut in the rock about a third of the way from the bottom on the right hand side is the trail … and you don’t have to duck down to avoid the ceiling. 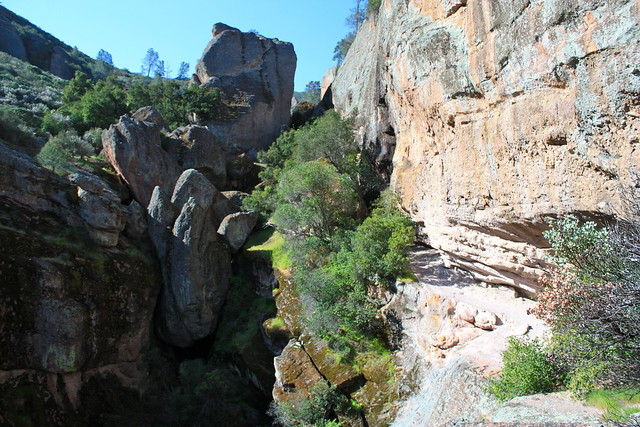 If you choose the cave route, it’s just a very short walk from the junction to the mouth of the cave. Remember that, even though there is visible light for part of the cave, a flashlight is required to hike it. There is no actual “caving” per se … instead, the trail follows a well-marked, reinforced pathway through the boulders, with the occasional stairways and handrails. 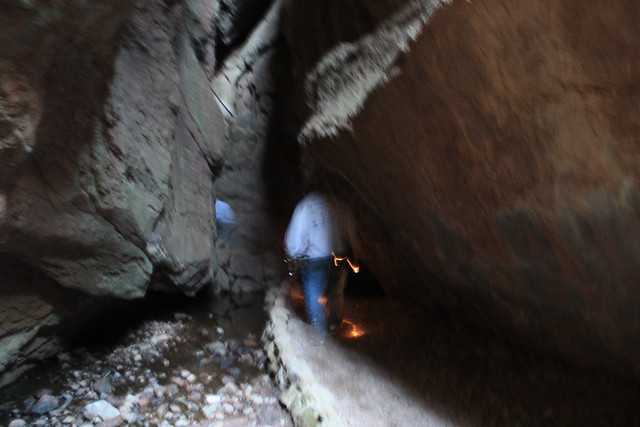 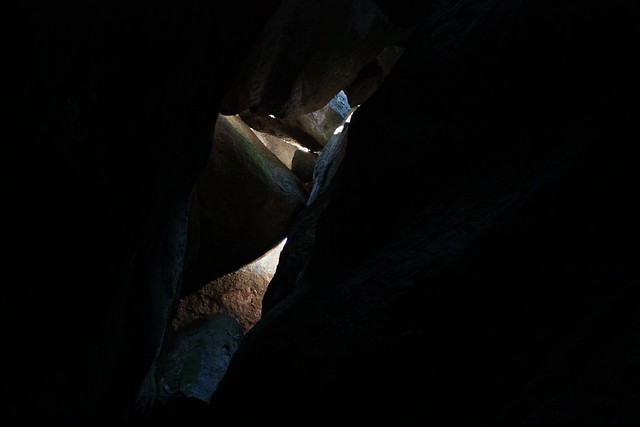 Either way, the routes do meet up, and then continue under another short section of open caves before reaching a cut staircase along a small, trickling waterfall on the side of a dam. 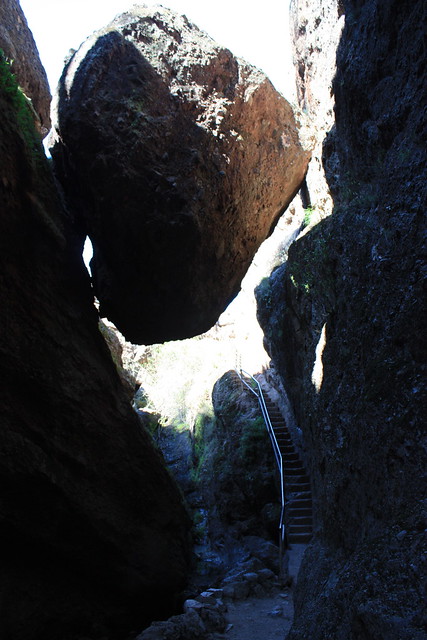 After you climb this staircase – which might be slippery due to the mist – you’ll be at the peaceful surface of Bear Gulch Reservoir. 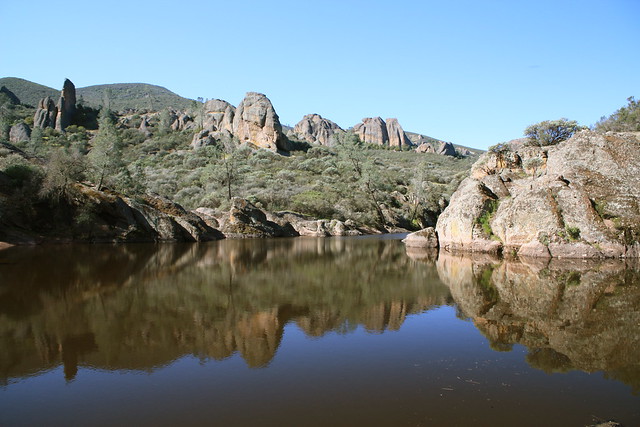 When you’re done enjoying the scenery, head back along the Rim Trail, which will eventually meet up with the High Peaks Trail and return you to the parking lot, giving you some incredible views of the Gulch you were just crawling around in on the way back. 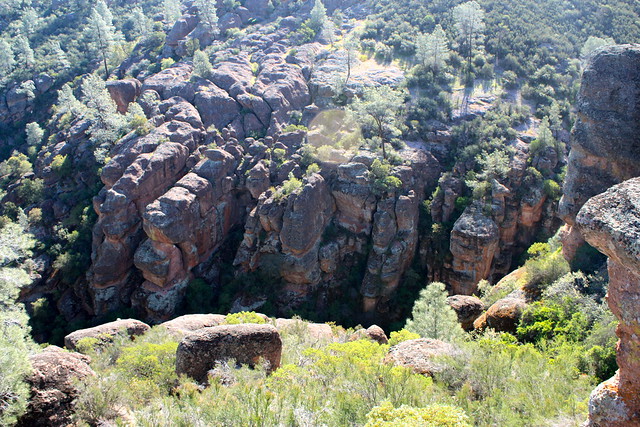 Excellent. The junctions are very well marked - even in the darkness of the cave. There are many climbers' trails that branch off from this main trail loop, but most of them are marked with carabiner icon and end pretty quickly.

Pinnacles Campground is located inside the park and has 134 sites, as well as a nearby general store and a swimming pool!

From the park’s East Entrance, travel past the Visitor’s Center and campground and take a left onto the road heading to Bear Gulch. There is a small nature center with a parking lot and bathrooms about a mile from the intersection. Continue past this for another 0.3 miles, to a small cul-de-sac, with a parking area. There are picnic tables and another bathroom nearby. The trailhead is on the south side of the lot, and is marked by a large sign.

Great Photographs! Looks like a lot of fun! Thanks.

Leave a Reply to Caving » Caving on HikerCentral.com Cancel reply