A short hike to 50-foot high Switzer Falls, one of the most popular and easily-accessible waterfalls in the Angeles National Forest. This route also includes a trip further down the canyon to Bear Canyon Campground, an easy way to get away from the crowds at Switzer to find some swimming holes you can keep to yourself.

Switzer Falls is one of the most popular waterfall hikes in Los Angeles County, and maybe in all of Southern California. It’s easily accessible from the picturesque Switzer’s Picnic Area – which means this trail can get pretty crowded on the weekends. If you find yourself circling the lower parking area, there are two overflow lots above it on the canyon road – it just means you’d have to add some elevation to your exit hike. 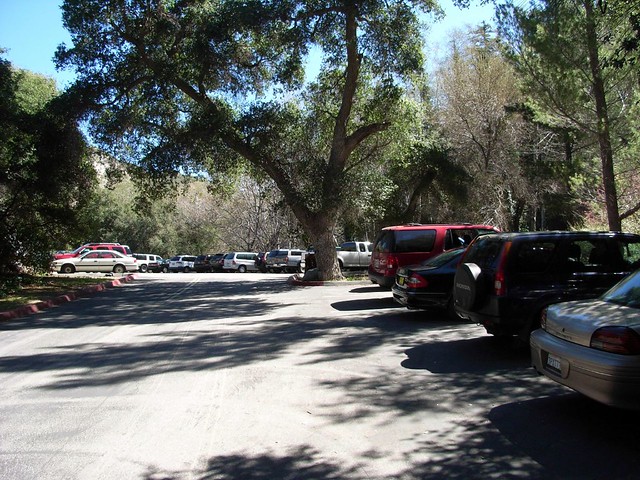 The first section of the trail is on paved asphalt and travels past several additional picnic areas. A few more small cookouts were getting started up, and a large stream of people were coming up out of the canyon – many of them with dogs in tow.

The pavement doesn’t last for long and soon you’re hopping across boulders and getting up close and personal with the Arroyo Seco, which is passable in all but the highest floods. If we’ve had a decent rainstorm, though, give the canyon a good 48 hours or so to drain out a bit. The trail hugs the river side for most of the way in on this first mile.

This area was badly burned during the 2009 Station Fire, but although the damage is visible the region is recovering nicely. 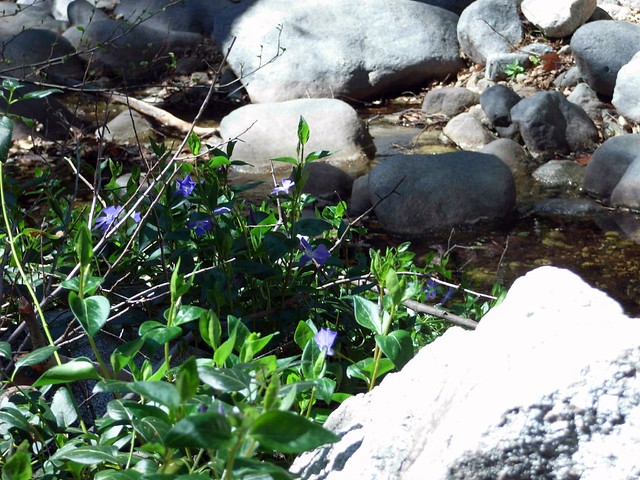 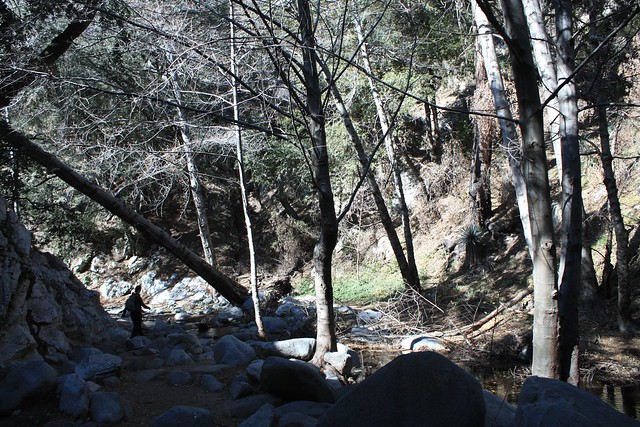 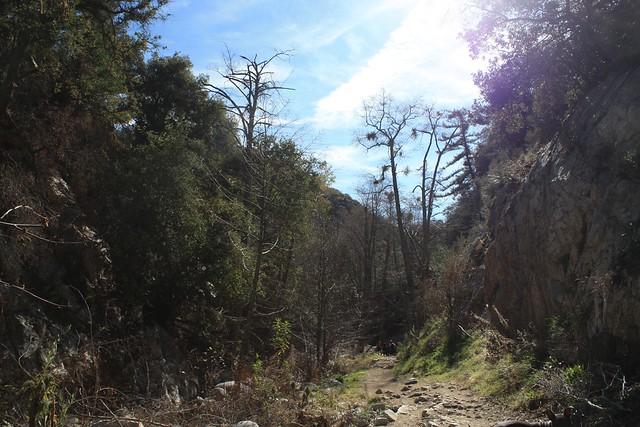 At the 1.1 mile mark, you reach a small junction at a stream crossing. The trail to the left takes you through the ruins of Switzer’s Camp, part of one of the early wilderness resorts in the mountains called Switzer-Land. There’s not a whole lot left, and you wouldn’t even know you were walking through ruins unless you read about it ahead of time. You can walk up to the spot where a small chapel once stood overlooking a waterfall. The Forest Service tore it down for safety’s sake, but you can still see some of the arched foundations scattered along the ridge.

If you take the right hand side, you’ll cross the stream. This is the one section of the trail that climbs out of the canyon’s shade and into the scrub of the higher elevations. If the sun’s beating down you’ll definitely feel it. But you’ll also get great vistas of the mountains surrounding you, which can go completely unnoticed when you’re by the riverside. Here’s another spot where you’ll be able to see the effects from the Station Fire for yourself. The first photo below is from before the fire – and the second is one taken after the trail was re-opened. 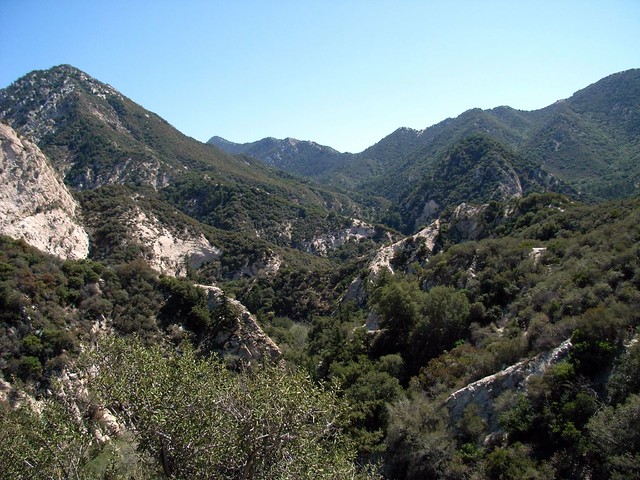 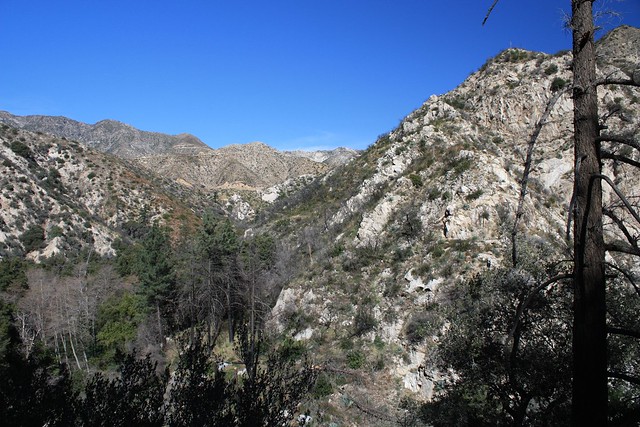 At 1.3 miles, stay left to continue on the Bear Canyon Trail. This one of the most gorgeous parts of the hike, offering jaw-dropping views of both the surrounding peaks and deep into the canyon below. The scrub and chaparral were scorched by the Station Fire but look like they’ll bounce back in a few seasons. 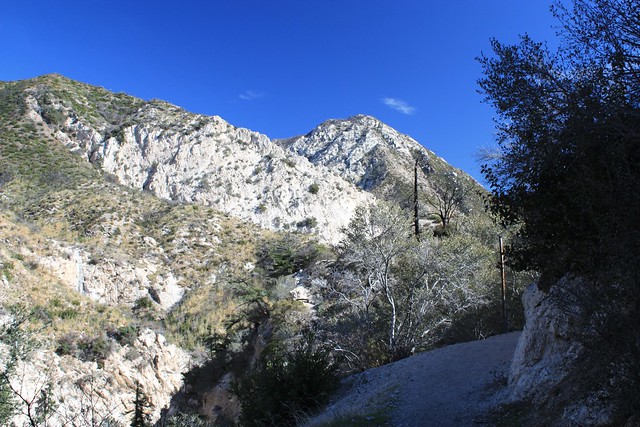 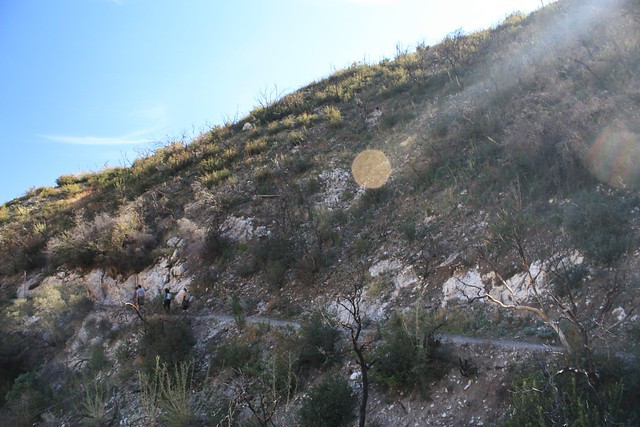 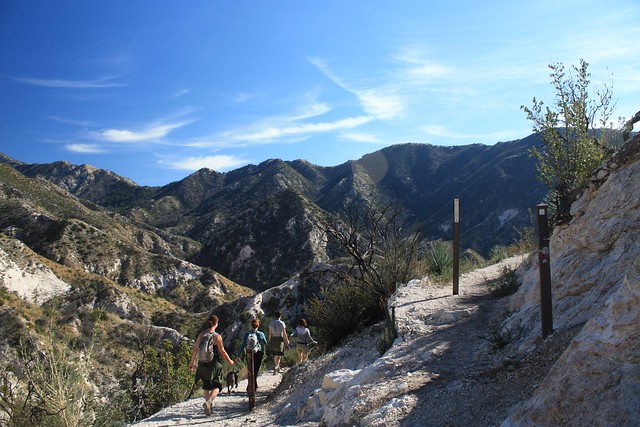 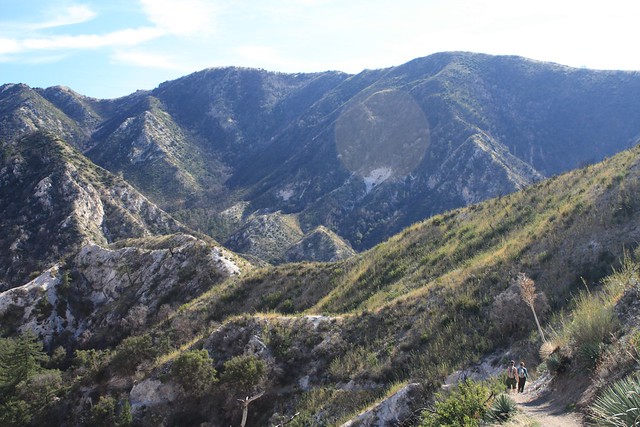 At the 1.7 mile mark, the trail switchbacks from the ridge down onto the floor of Bear Canyon itself. If you want to just hit up the falls, take a left here and Switzer Falls are just 0.1 mile away, making the round trip just under four miles long from the parking area – but if you’re in the mood to explore Bear Canyon, turn right and continue on the trail along the floor of the canyon.

This canyon used to be lined with oaks and sycamores before the Station Fire. I haven’t hiked deep into the canyon since the fire but it at least looks like many of the trees close to the water survived. The following images are all pre-fire. 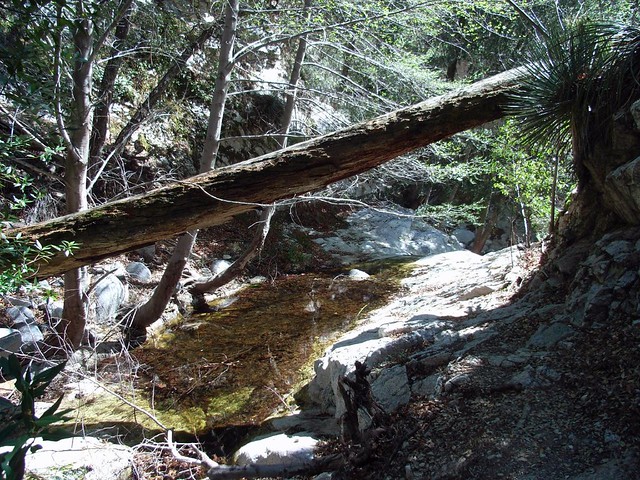 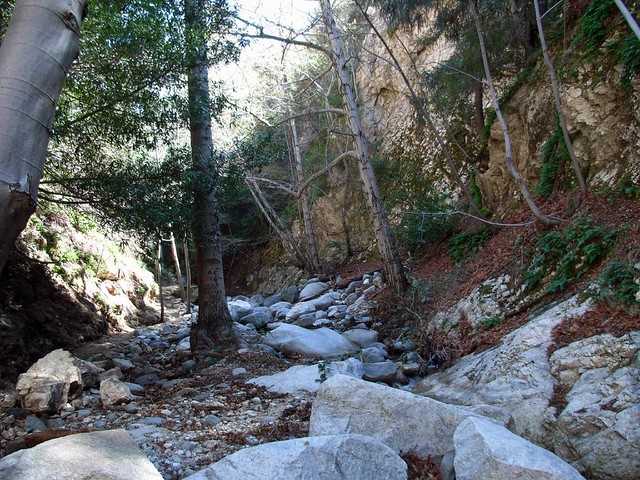 At the 2 mile mark, there’s a deep, multilayered pool that’s a great swimming hole. There was at one point a rope swing hanging over the pool for the more adventurous swimmers, too. 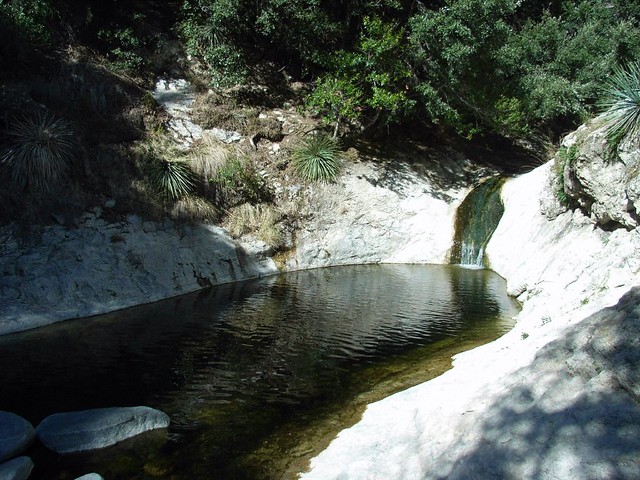 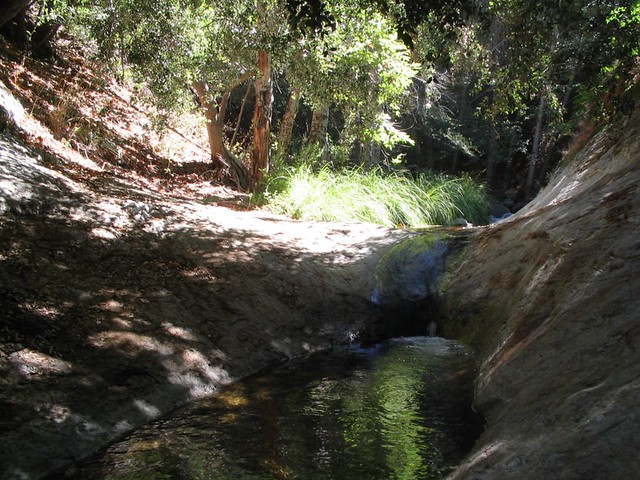 If this pool’s occupied, there’s another, smaller one about 5 minutes further down the canyon at the 2.1 mile mark. That one’s got the added bonus of having fish swimming around in it. There were actually a couple of anglers casting into the pool when I hiked by this time. 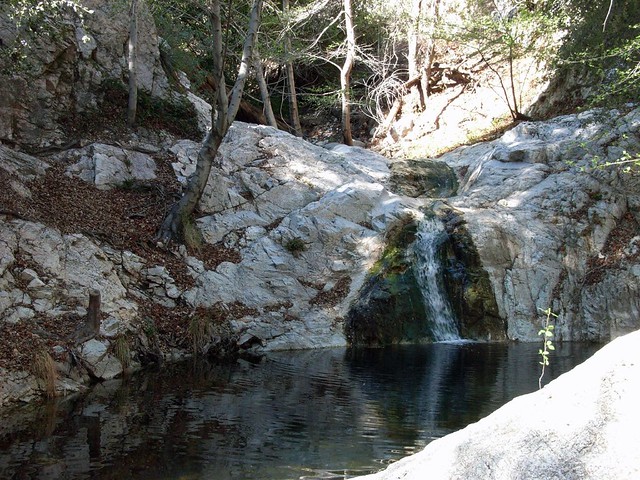 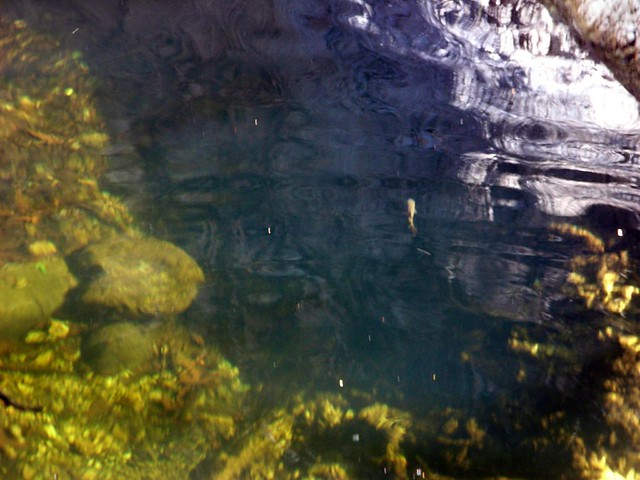 Shortly after the second pool at the 2.3 mile mark, you’ll reach a junction where Bear Canyon Creek meets up with the Arroyo Seco before continuing south. The trail sticks to the canyon wall and keeps going up Bear Canyon to the east. This is about the place where I found a nice flat rock in the stream and sat in the sun for 90 minutes, reading and enjoying nature’s best white noise.

In sharp contrast to the earlier parts of the trail, only two other hikers passed by me while I was sitting out there. So it’s not the total solitude you can get elsewhere, but it’s still pretty nice. Beats the beach crowds any day, though.

After the relaxation I’d come out for, I picked up and continued on along the Bear Canyon Trail, which climbed up piles of fallen, smoothed boulders as the canyon walls closed in. Other than the occasional scramble up and down to the river, the trail kept a pretty level elevation, so it wasn’t too tough. 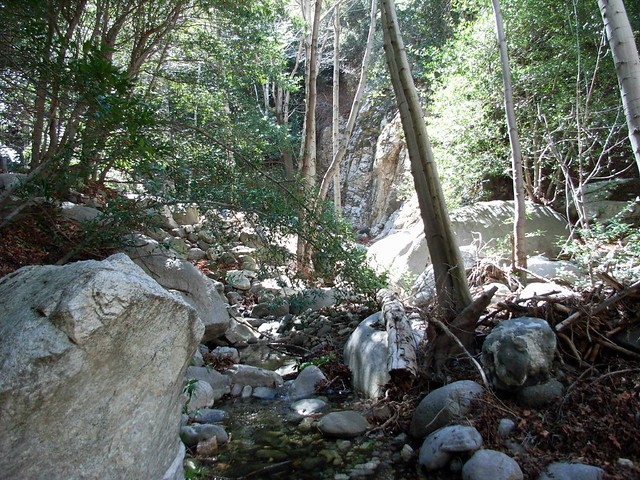 After lots of meandering and boulder hopping, I eventually made it to the surprisingly remote, surprisingly large and well-maintained Bear Canyon Campground at the 3.4 mile mark. 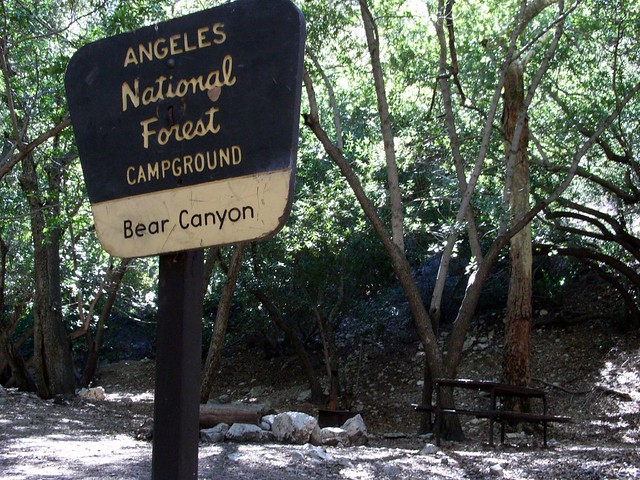 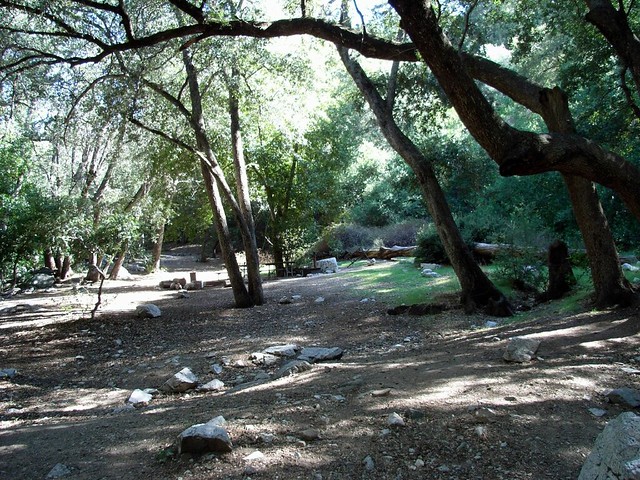 The campground had lots of cleared space, plenty of metal fire rings, picnic tables, and even some metal stoves. Although the camp felt pretty out-in-the-middle-of-nowhere it’s really only a bit more than three miles in from Switzer’s and just a little farther from the other side of the mountains in Altadena. I’m still going to mark it as a stop if I ever do the multi-day trip through the San Gabriels that I’m secretly, constantly planning in the back of my head.

A short hour later and I was back at the Switzer’s Falls junction. Take a right hand turn at the trail junction to trek to the bottom of the falls. If it’s a weekend or summer day, expect some crowds. 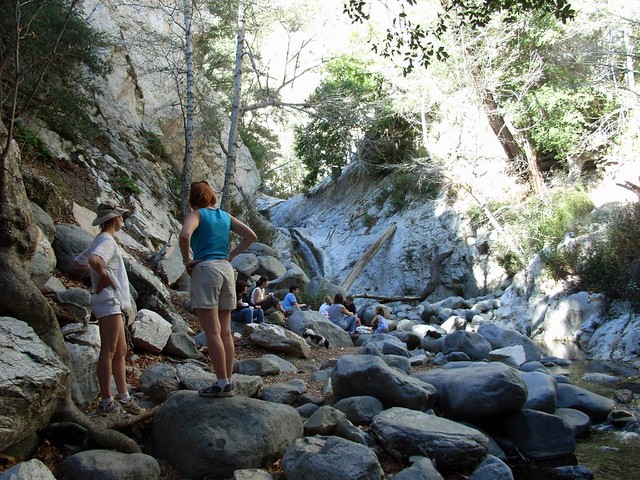 If you’re careful, you can scramble up a use trail to the right of the falls, which will get you to a deep swimming hole just above the plunge. It’s also a nice natural jacuzzi, though much, much colder. If you keep climbing up a bit farther, you can make it to an even more secluded and larger canyon swimming hole, with more water streaming down the sides. The trail dead-ends there. Any further travel is at your own risk … but please, do not attempt to scale up or down the larger waterfall – rescues, injuries, and deaths are all frequent in that section of the canyon. 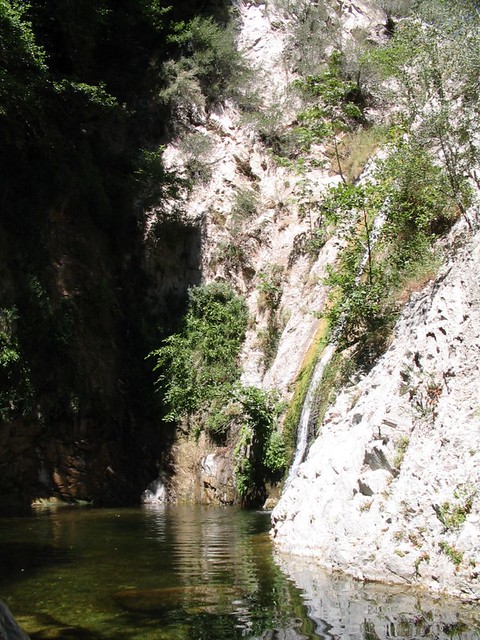 In February, 2017, Southern California got hit with one of the largest winter storms in its history. The storm dumped several inches of rain across the region, bringing arroyos and waterways back to life in a way that many long-time residents had never seen in their lives.

The following photos and videos are from a few days after the rain storm (always a good idea to give the canyons a few days to dry out before exploring!). In all my years of hiking in the San Gabriels, I have never seen the Arroyo or the Falls like I did then:

When you’re done relaxing by the falls, just head back out the way you came in.

Excellent near Switzer's and through to Switzer Falls. Trail begins paved and becomes a very rocky footpath with several easy stream crossings. The Bear Canyon trail is a bit less used, and is more rugged. It is still easily passable, though.

From the 210, take the exit toward the Angeles Crest Highway in La Canada Flintridge. Continue east on CA-2 for 9.8 miles. Pass the Clear Creek Info Center, then take a right on the Switzer Truck Trail. There is an often crowded parking lot at the bottom of the canyon near the picnic areas, as well as two overflow lots along the way. Display your Adventure Pass.

Sorry you didn't find the campground -- by 5 miles into the canyon you definitely would have come across it, and the campground is definitely still there. I wonder if maybe you ended up on a user trail in the Arroyo Seco instead of in Bear Canyon? Or maybe the campground has just been SUPER overgrown during the quarantine months from not being used?

Hi - We hiked the Bear Canyon trail today in search of the campground. After a 10.5 mile roundtrip hike, we never found the campsite. What could we have missed? We took a right towards Bear Canyon instead of a left which went to the falls. We saw all the pools, followed the trail, it eventually turned left and put us on the opposite side the stream. Looking forward to finding the campsite!

Chantry Flat is closed on weekends for the time being to cut down on crowding.

Hi, thinking to go visit Switzer Falls this weekend but not sure what to expect. Never been there so am wondering if we can see a waterfall there. We like to hike an easy trail since we have two kids, 8 and 11. Waterfall still there or drought now? Please let us know. Thanks

Anyone know the current condition for Switzer Falls trail? Would love to get there this weekend with the break from the rains.

Just did this hike over the weekend. The trail is in great condition and by that I mean you'll be hip-hopping across the creek the whole time. I loved it. Spent a pretty chilly night at Bear Creek. The trail is well maintained for the surefooted.

hike any current updates on this trail

This is a very developed trailhead. If your car can drive, you should be able to make it here :)

do you need a ford runner or can you drive a small car ?

Dawn Mine and the Sunset Ridge Trail

Dawn Mine and the Sunset Ridge Trail