White Chief Bowl is a large glacial bowl tucked into the upper reaches of colorful White Chief Canyon. Here, you will find meadows, streams, a small tarn, and a handful of backcountry campsites. The area has a long history of mining, and large outcrops of beautiful white marble are abundant throughout the hike. In addition to the mining history, the area features a number of notable geological and natural features, including sinkholes, an underground creek, caves, dry meadows, and a waterfall. 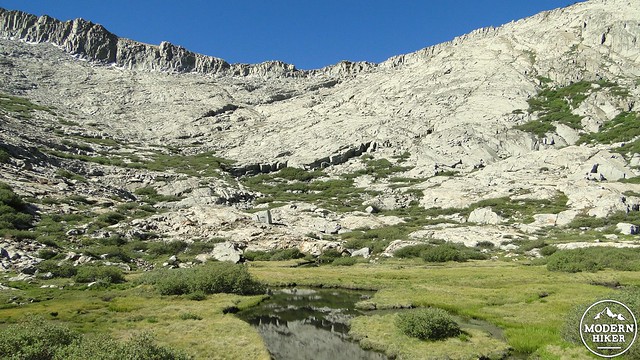 White Chief Canyon is one of the three hanging canyons on the west side of Mineral King Valley. These three canyons, including the canyons containing Eagle Lake and the Mosquito Lakes, can be enjoyed separately or as part of a multi-day backpacking excursion. All three can be accessed via the Eagle-Mosquito Trailhead in Mineral King. Backcountry permits are available for reservation through the NPS website. Each permit is $5 per person, and can be reserved in advance on March 1st of each year. Permits are best faxed in, and the rangers will return your reservation via mail within a few weeks. Note that the reservation is not the permit, and you will be required to pick up the permit the day before from the Mineral King Ranger Station, should you decide to backpack. 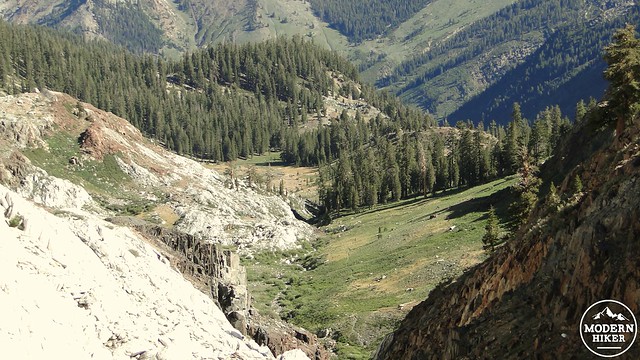 Of all the hikes I took recently in Mineral King, I found White Chief Bowl to be both the most memorable. White Chief Bowl and the eponymous canyon feature stunning meadows hemmed in on both sides by granite and sedimentary rocks. Numerous marble outcrops intermingle with the reddish sedimentary rocks to create an unusual color palette for the Sierras. The character of the canyon stands in stark contrast to nearby Eagle Lake, which looks much more like the classic Sierra landscape. 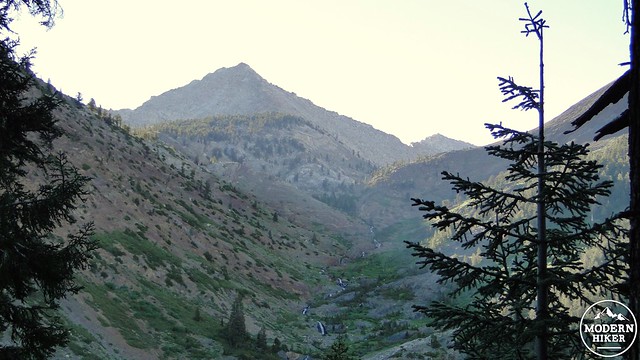 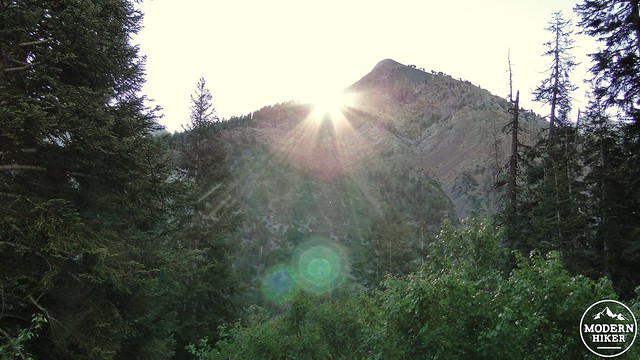 The trail starts out from the Eagle-Mosquito Trailhead and quickly begins a moderate ascent through grass- and sagebrush-carpeted slopes dotted with avalanche-thinned firs and junipers. The trail passes Spring Creek and Eagle Creek before coming to a junction with the Eagle Lake and Mosquito Lake Trails. Stay straight on the junction to White Chief Canyon. At this point, the trail begins a relentless climb that will certainly slow you down and leave you struggling to keep your breath. Take your time on this stretch, as views across the canyon to cascading Crystal Creek and Franklin Creek offer plenty reasons to stop often. 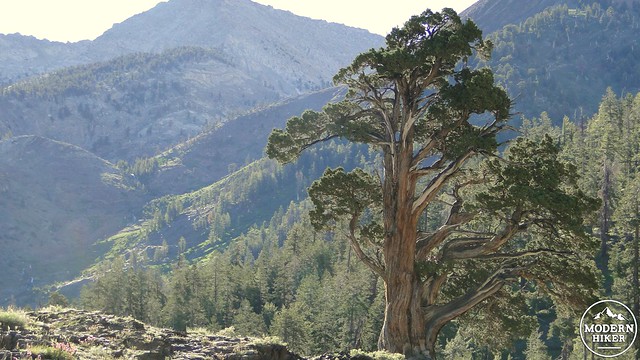 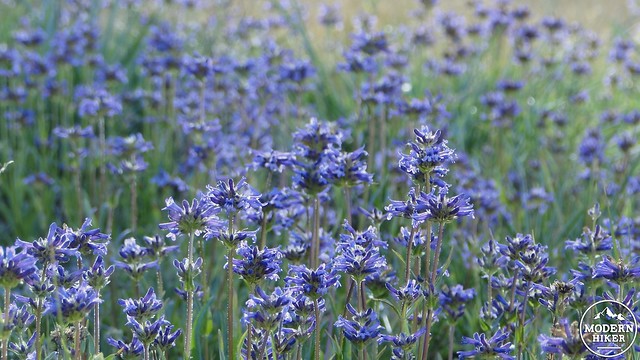 The trail next ascends into the opening of White Chief Canyon along a dry creek bed. The rock will abruptly change into crumbling sedimentary rock, which thins out the forest and opens up the terrain for meadows and wildflowers. A beautiful solitary juniper stands upon one of the first outcrops you encounter, almost as if standing sentinel over the canyon’s mouth. The trail will veer around this juniper, offering multiple angles from which to admire the picturesque tree. The usually dry channel of White Chief Creek will be on your left. 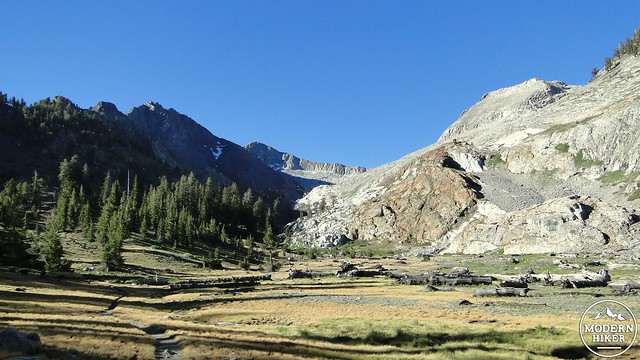 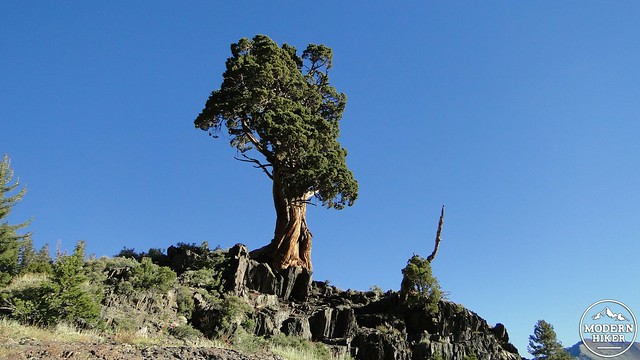 You will soon enter a brief patch of woods and pass by the remains of Crabtree Cabin. Not much is left to see here, although it is a scenic spot to stop and rest in the shade of the forest. After the cabin, you will cross the dry creek and emerge into an expansive meadow. The meadow is relatively dry, without the usual profusion of corn lillies and wildflowers.  Patches of woods and wildflowers on the left frame the scene as the top portion of White Chief Bowl several miles down-canyon comes into view. 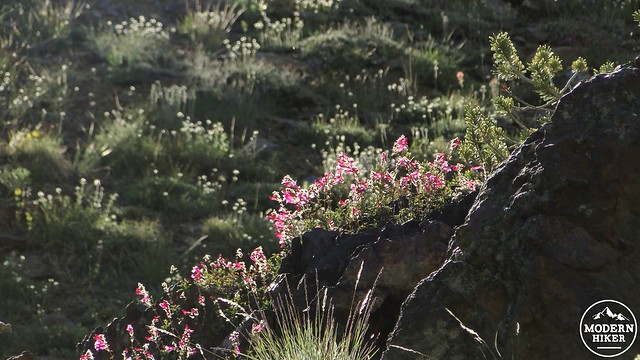 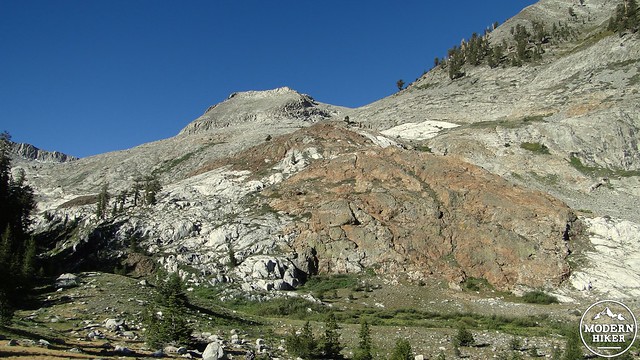 Pass through the meadow, enjoying a blissfully flat reprieve. Stop frequently and enjoy the view, as the canyon and meadow scene is a revelation after the climb you just endured. Soon, the trail will begin a more modest climb up a moraine that reaches another meadow. At the top of this moraine, the creek will become audible and visible before it drops into the porous metamorphic rock and commences its run underground. This meadow is nearly as lovely as the first, although it is likely to be greener and damper with more wildflowers. 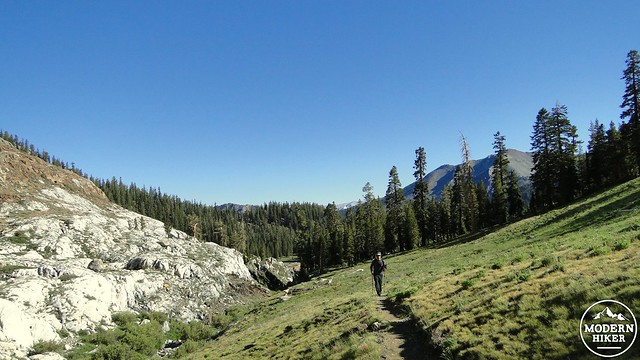 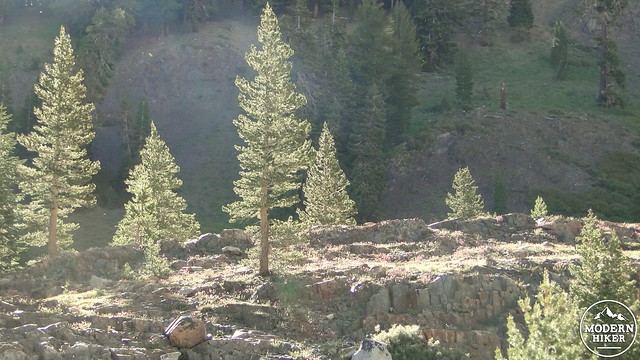 Lodgepole pines on a rock outcrop dotted by wildflowers

At the end of this stage of the canyon, you may notice a small waterfall cascading over a dark, reddish rock outcrop. This rock outcrop ends abruptly at another outcrop of crystalline white marble. The trail will lead through the meadow and will dead-end at the base of the waterfall. Before you get to the end of the officially maintained trail, you may notice a use trail dipping down to the creek and then climbing up the opposite hillside. You may also notice that there’s a door-shapped hole in the marble outcrop, indicating one of the entrances to the mine. You may be tempted to enter, but it should be noted that the caverns and sinkholes in this area are extremely dangerous and should not be entered. 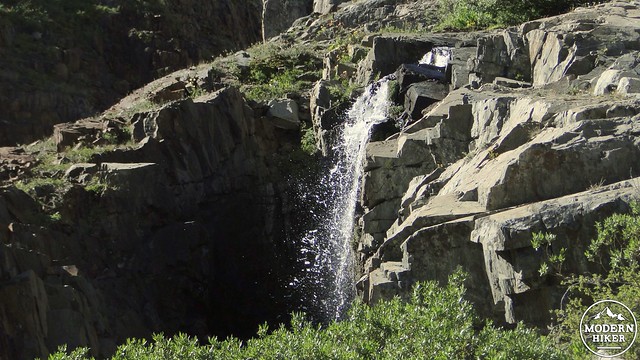 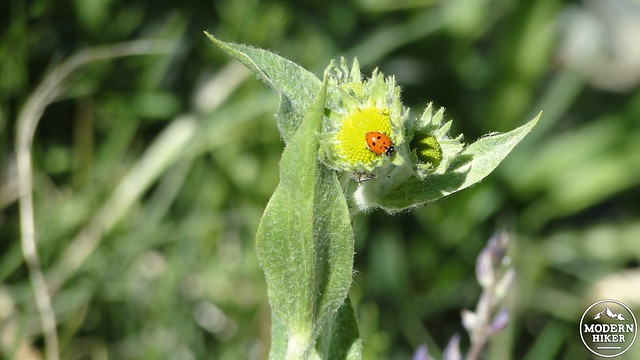 If you choose to follow the non-maintained trail leading to the Bowl, you will cross the creek and climb the hillside to follow the trail just below the entrance to the mine. The trail will then scramble up and over the marble and metamorphic outcrops along the top of the waterfall. The trail occasionally disappears or is only marked by ducks/cairns that are difficult to pick out. If you keep away from the edge of the waterfall and follow the most obvious and easy terrain, you will be able to make it up over the outcrops without much of a problem. The fun part is that the rock outcrop is dotted with a number of different wildflowers, including lovely Sierra Columbines. 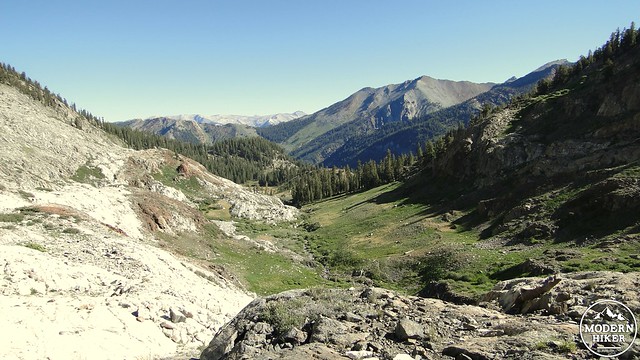 White Chief Canyon beyond the falls 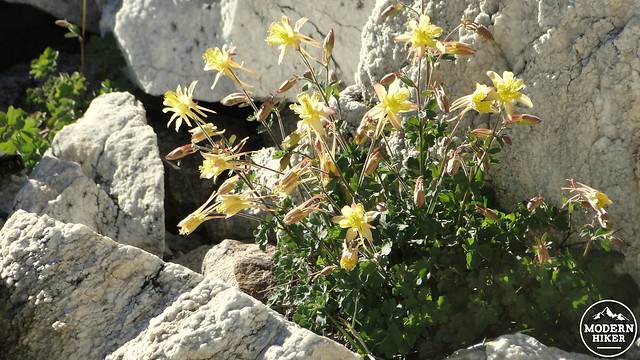 The trail will dip down through some more rocks to cross a creek. Along the way, you’ll notice a number of deep sinkholes that appear to have no bottoms. Do not try to enter them as they are even more dangerous than the caverns. The trail will emerge at a third meadow, even lusher than the first two, which is framed by small groves of foxtail pines. After passing through a patch of willows, the trail will make one final climb before emerging into White Chief Bowl. 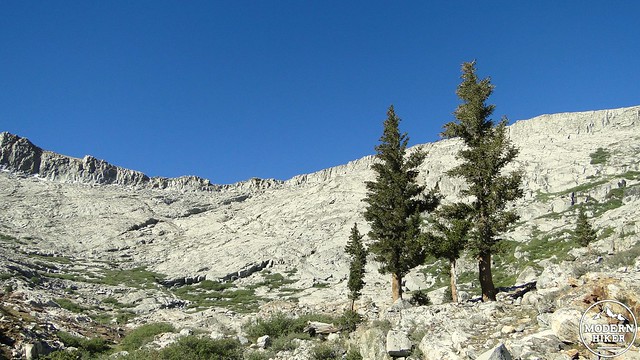 The bowl is a deep, glacially carved amphitheatre, hemmed in by granite on the west side and darker metamorphic rock on the east. The base of this “bowl” is covered in lush meadow, with a sluggish, meandering stream. This is prime real-estate for mosquitos, so come prepared with bug repellant if you dayhike or backpack into the bowl. You may notice a few small pools as well as a few good outcrops up above the meadow to drink in the entire scene. If you look back toward the canyon, you’ll notice Timber Gap across Mineral King Valley with the craggy, barren peaks of the Great Western Divide and the Tablelands in the distance. This spectacular scene is your reward for some hard climbing and the off-trail and barely-on-trail scrambling it took to get here. 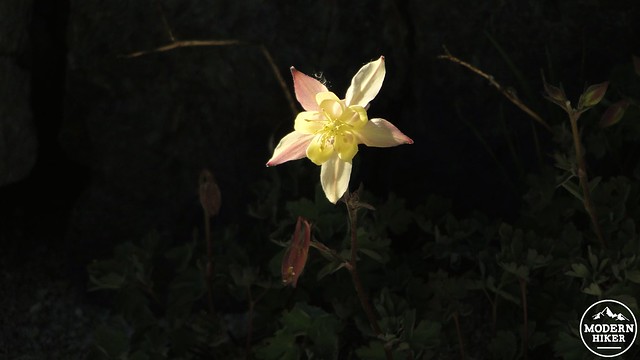 After enjoying the views for as long as the mosquitos will allow, retrace your steps through the various meadows and over the outcrops, past the waterfall, through the canyon, and down the slopes of Mineral King Valley to return to the trailhead. White Chief Bowl has many qualities that set it apart from the classic Sierra scenes of granite, lakes, trees, and meadows. It still has all of that, but it adds some mining history, colorful rocks, sinkholes, and caverns to the mix. If you only have time to take one major hike in Mineral King, this is the one I recommend. 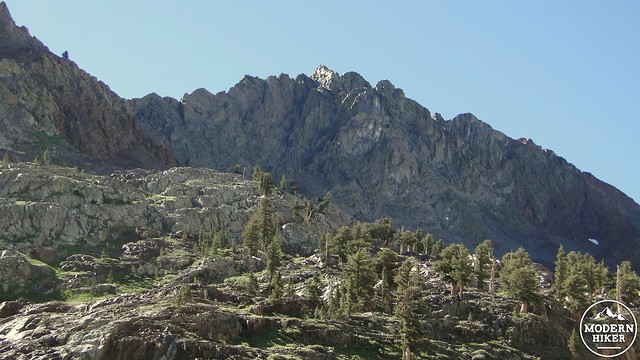 The trail is well-marked and maintained until it ends at the waterfall. After that, the unmaintained trail is often rough and sometimes difficult to follow, as it climbs up over rock outcrops and through meadows where the trail nearly vanishes.

The closest developed campsite is Cold Springs, but there are many undeveloped backcountry sites along this trail. Make sure you have all the proper permit information if you plan on camping in the backcountry!