Bryce Canyon isn’t actually a canyon – it’s a group of huge natural amphitheaters that’s been eroded into strange formations, the most famous being the hoodoos. These red and white columns of stone can be found all over the Plateau, but nowhere are they as impressive or numerous as they are in Bryce Amphitheater – the main attraction of the National Park.

This write-up stitches two loops together in the Amphitheater – the Navajo Loop and Peekaboo Loop, as well as the popular Queen’s Garden Trail.

When I arrived at Bryce, I only had a few hours of daylight left – and I was facing a forecast with 2 feet of snow and blizzard conditions for the next day. When I asked about the weather, a ranger looked at me and just said, “If you want to get into the amphitheater floor, go right now.”

Park at Sunset Point to gear up for the descent. If it’s snowed recently, you’ll want to bring along a pair of YakTrax or Stabilicers. A lot of the narrow passageways in the amphitheater don’t get a lot of sun, and can hold onto ice and snow long after a storm has passed – and since the trail starts and ends with steep inclines, you’ll definitely appreciate the extra traction.

Gaze out from the Sunset Point Overlook and start heading down. 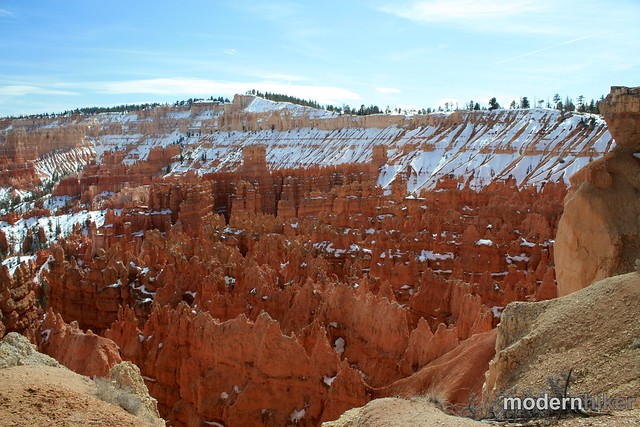 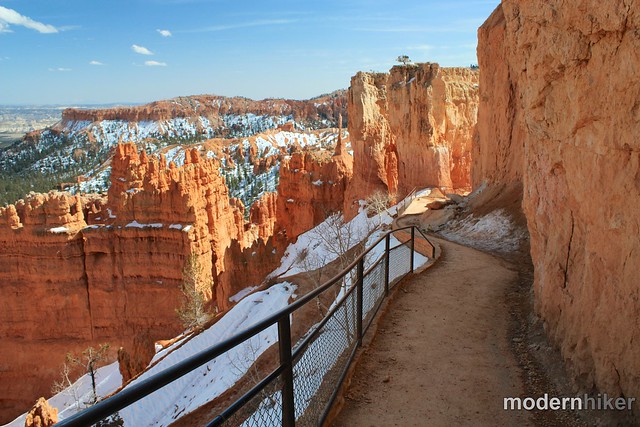 Look for a large hoodoo called Thor’s Hammer close by – and soon you will come across the junction with the Wall Street side of the Navajo Loop. 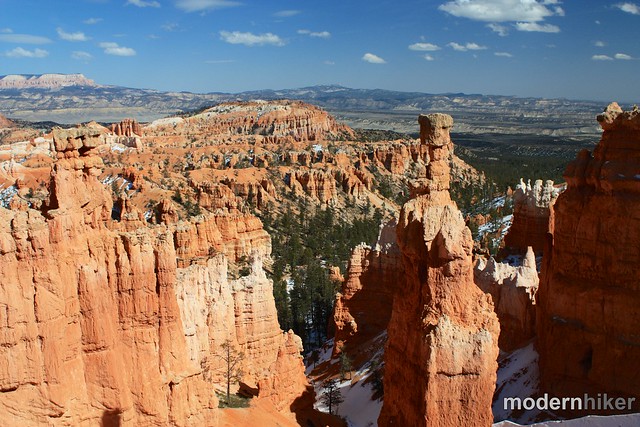 The Wall Street side of the Navajo Loop, like the rest of the park, is undergoing constant erosion. Unlike other sections of the park, however, its canyon walls are incredibly narrow – so when the Park Service rangers spot loose rocks along the way, they’ll close that section of the trail to hikers for safety. This seems to happen more often during the winter and after rainstorms – and unfortunately I was not able to hike the route on my trip. If it’s closed, the Two Bridges side of the loop will be open and you can take that down instead.

On your way down, you’ll be hiking along some of the tightest switchbacks you’re likely to ever come across. You might be surprised, but somehow trees have found a way to grow in these narrow, shady canyons. 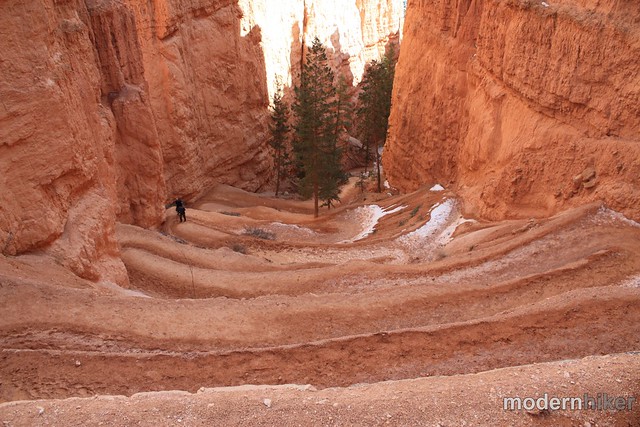 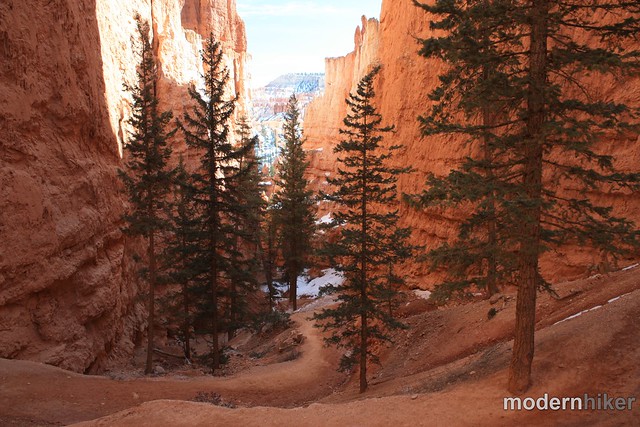 The trail drops 580 feet on the 0.8 mile Two Bridges section. Be sure to look into each of the side canyons for more incredible views – and, of course, the Two Bridges themselves. Do yourselves a favor and try to get a topo map with some of the named hoodoos pointed out – along this stretch, you’ll see Thor’s Hammer and The Sentinal along with Organ Grinder’s Monkey and The Gossips. And, of course, the slightly less whimsically named Two Bridges: 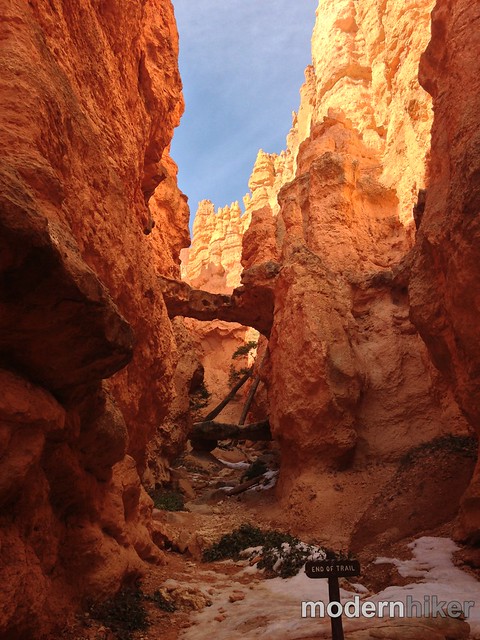 At the 0.8 mile mark, you’ll hit the end of the Two Bridges trail on the Navajo Loop and reach the floor, where you’ll note the floor has a thicker concentration of conifers. Veer slightly to the right to head toward the Peekaboo Loop Trail. 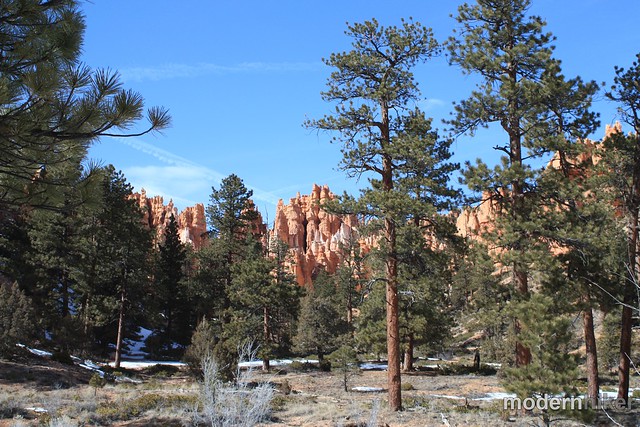 It’s a short 0.2 miles through the relatively wide floor of Bryce Canyon, at which point you’ll take a sharp right to start on the Peekaboo Loop. Keep right again right after the junction to start your loop in a counterclockwise direction, which will take you on a climb around the back end of the canyon and return you down to the floor. Both directions offer dramatic views and incredible scenery. Heading counterclockwise gets all the elevation gain done right away – if you head clockwise and start in Peekaboo Canyon, you’ll have a lot more ups-and-downs.

You’ll climb back up about 367 feet in 0.6 miles as the trail makes its way through some pines and soft dirt. You’ll be hard-pressed NOT to be slack-jawed as you explore the interior of Bryce Amphitheater. Looking at the hoodoos from above is exhilarating – and squeezing through the narrow paths of the Navajo Loop is fun – but there’s just something about walking among these rock formations at their level that really brings their scale and wonder into focus. On this section of trail, look for a large formation known as The Cathedral. You’ll know it when you see it. To your immediate south near the canyon rim is a ridge called the Wall of Windows. You should be able to figure that one out, too! 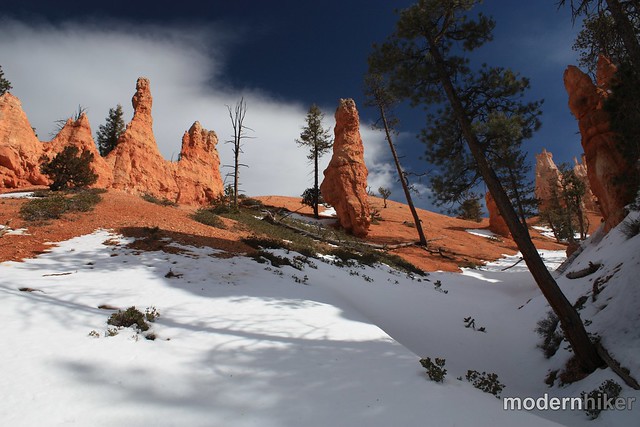 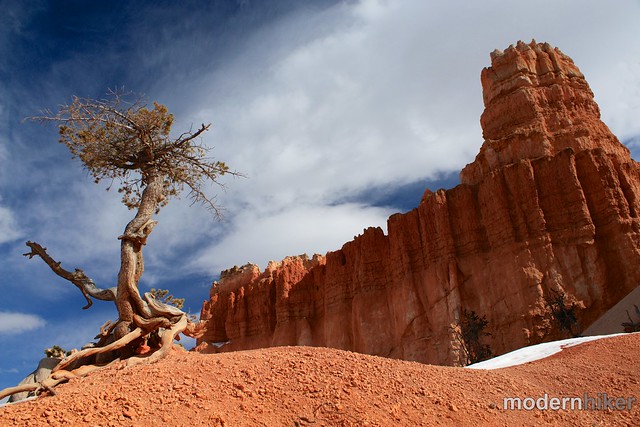 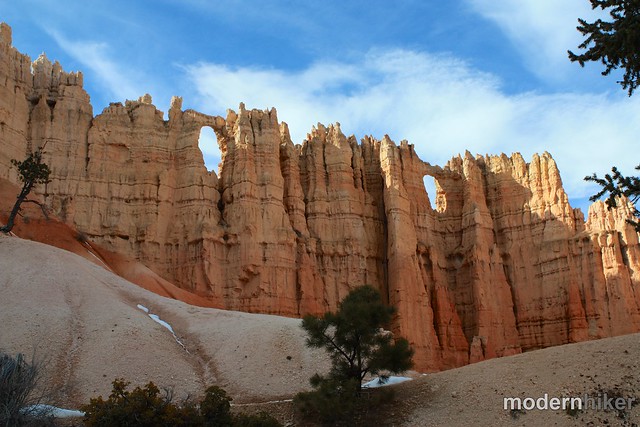 If you’re not content to just appreciate the hoodoos from afar, don’t worry – this trail will let you get up close and personal with them – and even go through them via small tunnels, too. I’m pretty sure I had a giant grin on my face the entire time I was hiking down here, so don’t fight it if you find yourself smiling for no reason. 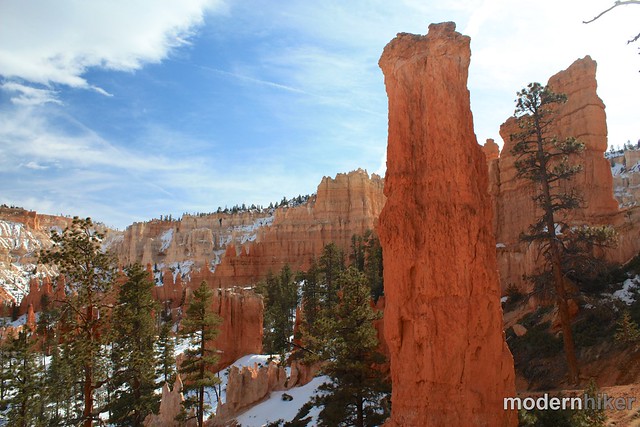 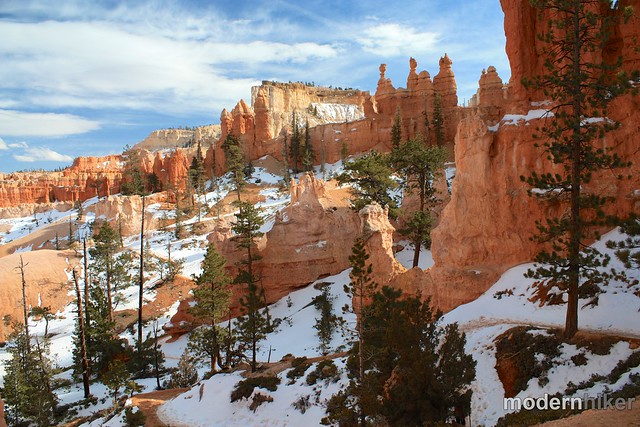 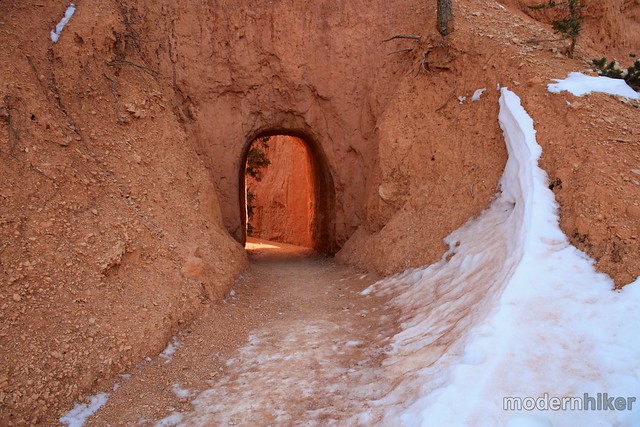 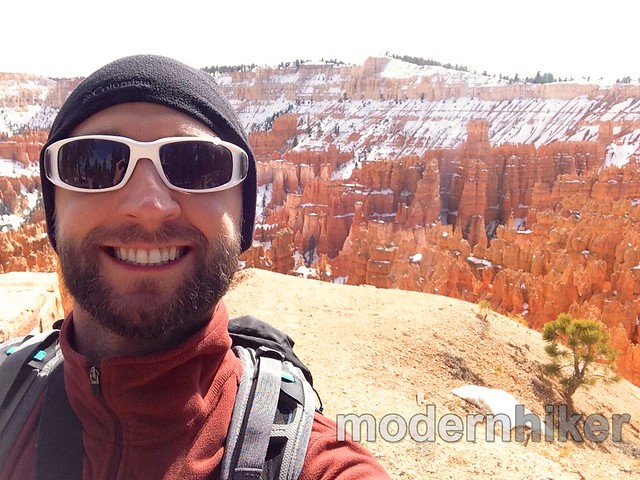 At about the 2.4 mile mark, you’ll pass a side trail that will take you back up to the Rim at Bryce Point (1.7 miles one-way), but you’re going to ignore that and keep heading back down through Peekaboo Canyon.

You’ll pass an outhouse and small equestrian facility cuts through more of those magical hoodoos. 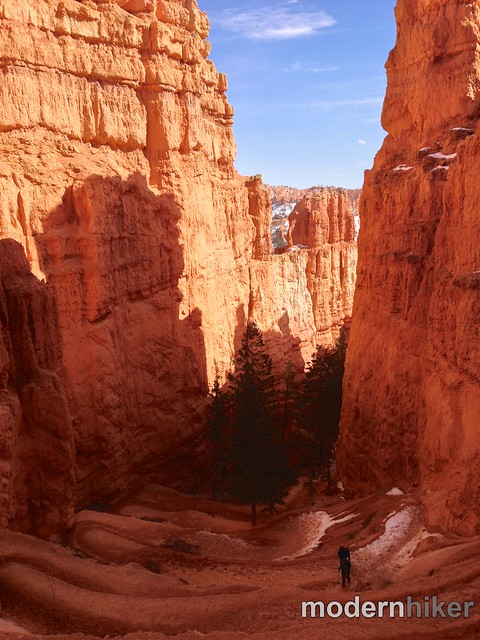 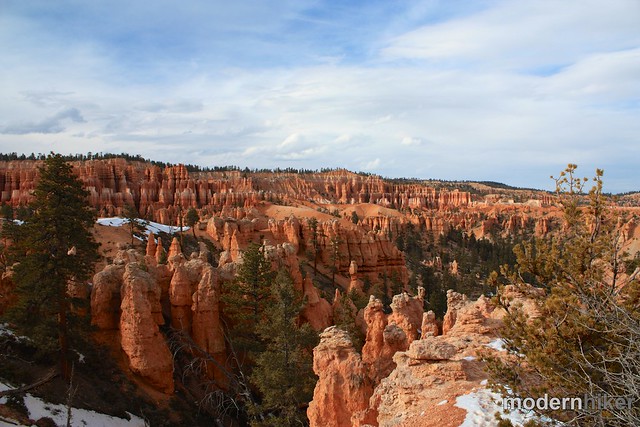 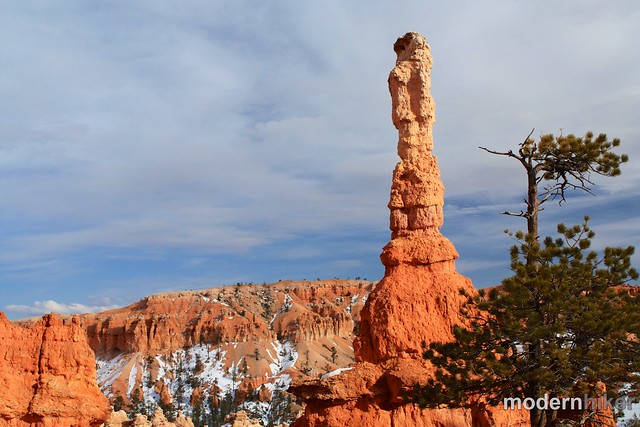 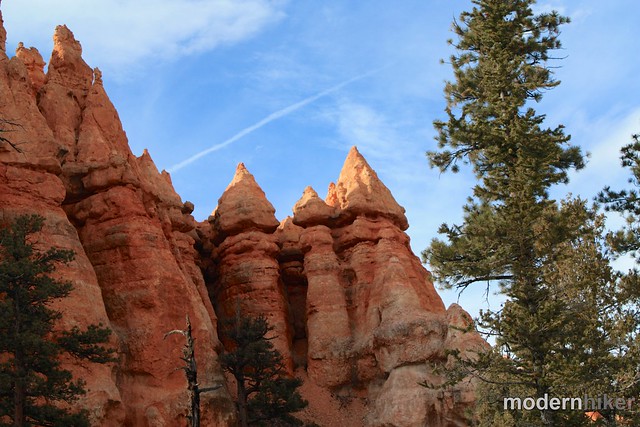 It’s 1.3 miles from the spur trail back to the start of the Peekaboo Loop. From there, backtrack 0.2 miles and this time ignore both sections of the Navajo Loop and instead stay to the far right / keep hiking north toward the Queen’s Garden.

It’s 0.6 miles to the Queen’s Garden – and while there aren’t a lot of hoodoos along the way, when I visited some other hikers made their own stone sculptures near a wash just outside the Queen’s Garden. I didn’t know about the Bryce Canyon Cairn Garden before I went here – there’s not much about it online or in any literature I read – but apparently it’s a semi-permanent thing. Whether or not you know about it (and now I guess you do), coming upon a scene like this seemingly out in the middle of nowhere is a very unique experience. They’re even in the trees!

I thought this was pretty neat when I saw it, but you could make a strong case for them as an unnatural alteration of the landscape (because it is), so I wouldn’t be surprised if rangers or volunteers came down every once in a while to knock these things down. 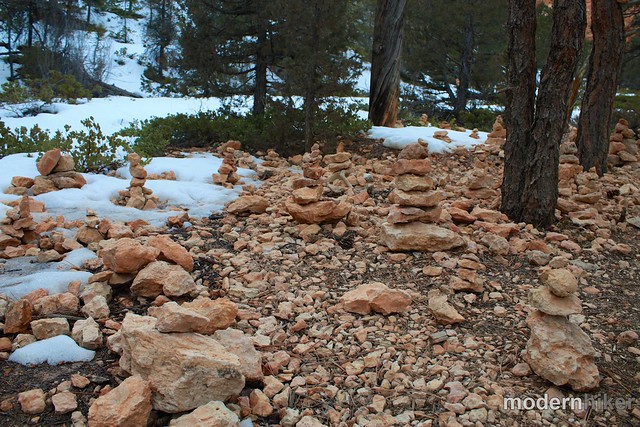 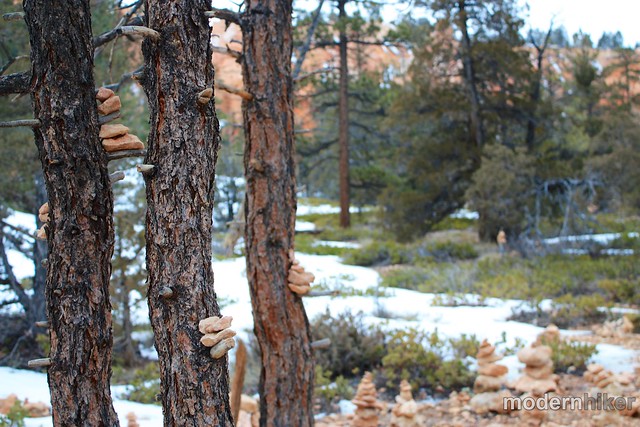 Regardless of your feelings about cairns, the Queen’s Garden is right around the corner from the Cairn Garden and 100% natural. Just head up that red rock trail and make a very short trip through some narrow squeezes on a spur trail that will take you inside a very tiny amphitheater surrounded by dozens of hoodoos – including one that allegedly looks like Queen Victoria riding a turtle or whale or something. I apparently didn’t see much because I didn’t take any photos, but I guess if you squint and really use your imagination you could make it work for you. 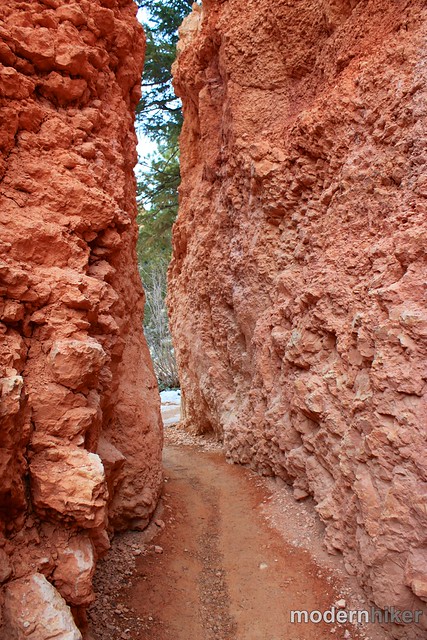 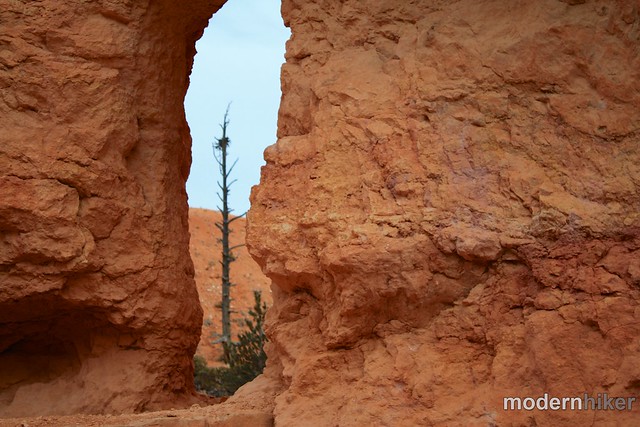 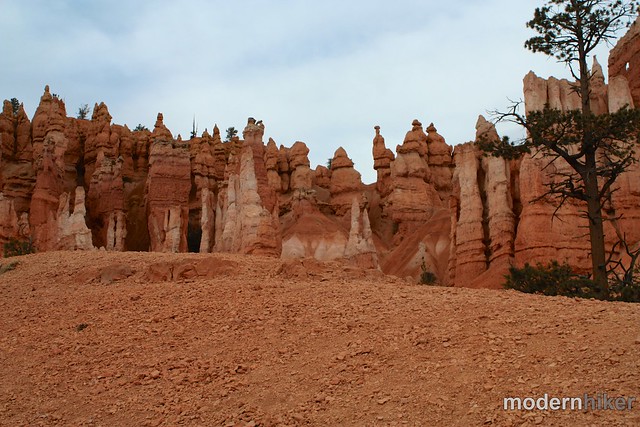 Whether or not you see the Grandmother of Europe, the Queen’s Garden is a really fun place to spend some time.

You’ve got another 0.9 miles of trail from the Queen’s Garden back up to the rim at Sunrise Point, and along the way you’ll pass through more tunnels and gaze upon even more incredible landscape as the hoodoos stretch into the horizon past Ship Rock. 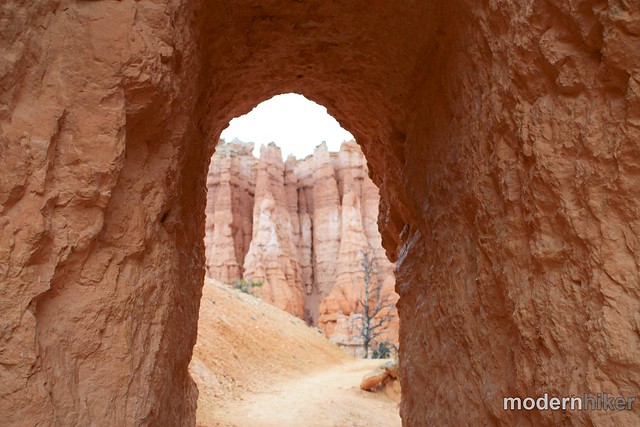 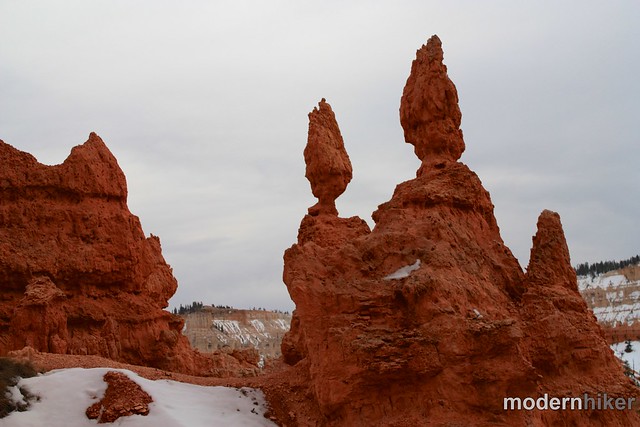 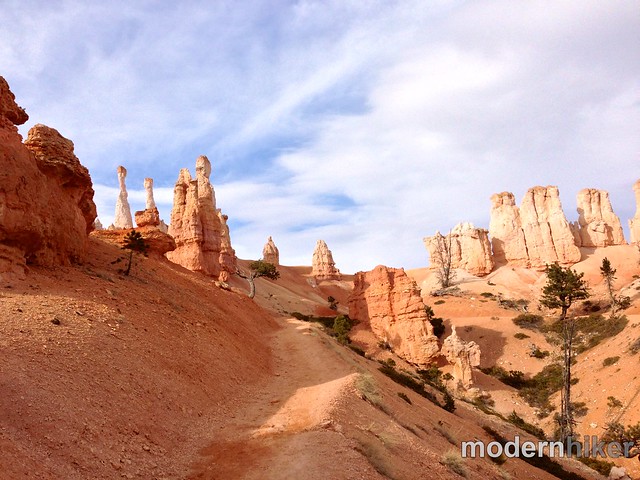 Once you reach the rim at Sunrise Point, it’s only an easy, flat, beautiful 0.5 miles along the rim back to Sunset Point.

A note on seasons:

Bryce Canyon National Park isn’t the easiest place in the world to get to in the winter. It’s remote, many services shut down in the off-season, and you may find yourself like me and snowed-in during a winter snowstorm. However, it is 100% worth the effort to visit when it’s cold. The park is less crowded, rangers offer snowshoe hikes, you can book sleigh rides from the nearby lodges, and the colors of the hoodoos are absolutely stunning when they’re wet – especially when there’s still a bit of the white stuff dusting them. 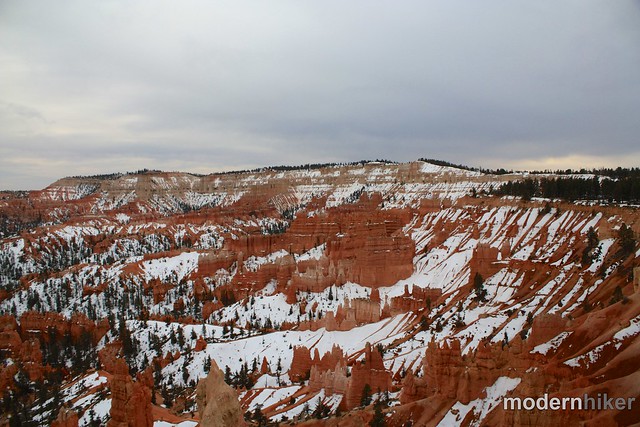 While the park is open year-round, the trail condition can change dramatically depending on when you visit - especially in the winter. Because the region is a combination of mountain and desert climates, strange weather can happen unexpectedly (the park has had several thunder-and-lightning snowstorms) and expect conditions to change rapidly. Most trails are well-marked, but packed ice and snow in the winter may make certain trails too dangerous to travel on. If you're heading here during the colder months, be sure to pack a pair of Stabilicers or YakTrax to increase your foot friction.

There are two campgrounds inside Bryce Canyon National Park. During the winter months, one is closed and the other is greatly reduced in size. There are also several hotel options in the town north of the entrance to the park.

Bryce Canyon National Park sits at the southern terminus of Utah Route 63 at the junction with Utah Route 12. It's 143 miles from Saint George. You'll drive through Bryce Canyon Village on your way into the park, which has an airport, lodging, and food. Most of the village shuts down during the winter. From May through October, a free shuttle runs throughout the park - which can make it much easier to get around.

Laura, I believe the visitor map you get on the back of the park brochure will have some of the names for you. I had the National Geographic map of Bryce and that one had a bunch of names on it as well. The names are very colorful, so I bet the kids will enjoy hearing them and trying to find the shapes in the rocks!

Hi, we are interested in doing the figure eight trail in August and I was wandering where can I find a map indicating the name of famous hoodoos that you mention? We are going with children and I think it would be more interesting for them to look for different hoodoos. Thank you

You absolutely must - I only got to spend a day in there before a blizzard blew in but it was absolutely breathtaking. I can't wait to get back myself! :)

I've been wanting to go to Bryce forever now. I went 1x but I was sicker than a dog. I'll have to check out this hike when I finally go!

I'm so glad I got to see it in the snow ... even if it meant I got stuck there for two days afterward :)

Peek-a-Boo Loop is one of my favorite trails. Absolutely love that hike, especially when there's snow