Round Meadow and Beetle Rock Beginner

The Big Trees Trail, Beetle Rock, Beetle Rock Family Nature Center, and the Giant Forest Museum form a complex offering informative and interpretive hikes, a review of local human and natural history, and a fantastic, kid-friendly spot to enjoy a classic Sierra sunrise. All of these landmarks are found nearly adjacent to one another, and a short hike can tie these experiences, as well as nearby Sunset Rock together for a satisfying and educational introduction to Giant Forest. 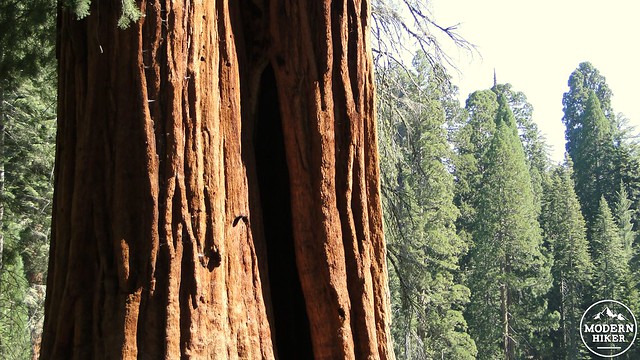 This area used to be one of the heaviest developed and used areas in Sequoia National Park. At one point, there were 300 buildings in the area, including numerous areas catering to automobiles and the organisms who operate them. The development was so pervasive and intrusive that park authorities were witnessing a rapid decline in the health of the surrounding forest. Given that the surrounding forest is some of the most beautiful in the area, the authorities decided that something needed to change. It is unknown whether this was the twig that broke the camel’s back, but when a massive sequoia toppled and crushed the park superintendent’s residence, many of the buildings were disassembled, services were relocated to nearby Lodgepole and Wolverton, and the forest was allowed to regenerate. 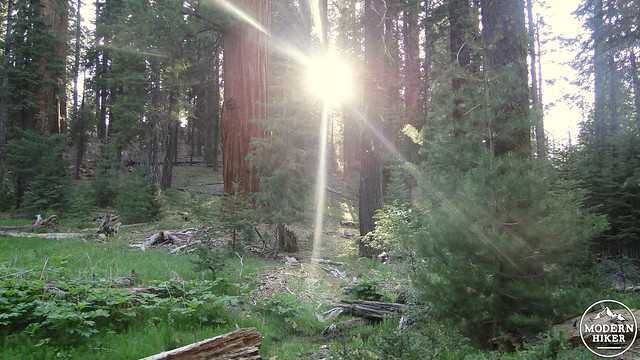 Meadow on the connector trail

Today, there are only a handful of buildings remaining, including the Giant Forest Museum, the Beetle Rock nature center, a residence, and a handful of service buildings. The hustle and bustle has been moved elsewhere, and although this is a hub of activity, it is quite possible and easy to find some peace and quiet. In fact, some of the most peaceful and serene scenes I’ve encountered at Sequoia National Park have occurred in this area, including a mama bear relaxing at the base of a sequoia tree while her three cubs scrambled up the same tree, as well as numerous sunsets, empty trails, and vast granite spaces with sunset views. 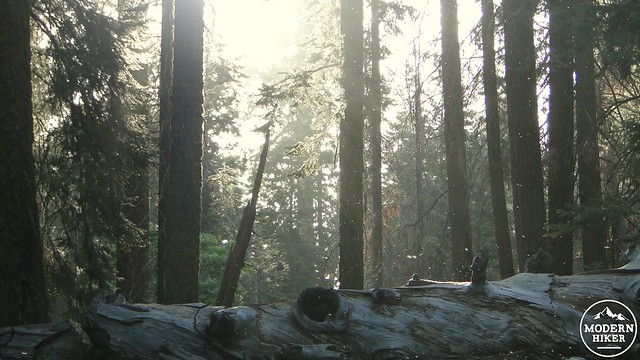 Starting from the parking lot, you will notice that there are two small, covered staircases descending down to Generals Highway. The one closest to the parking lot entrance will take you to the museum. The one further from the parking lot entrance will take you down to the trail to get to Round Meadow and the Big Trees Trail. This side path will wind around a small hill, bearing to the left before coming to a bridge over peaceful waters. To your right is a small meadow, which is a popular spot for black bears to nose around for tasty morsels. This junction is near the spot where I observed bear cubs cavorting in the bushes and testing their tree climbing skills. 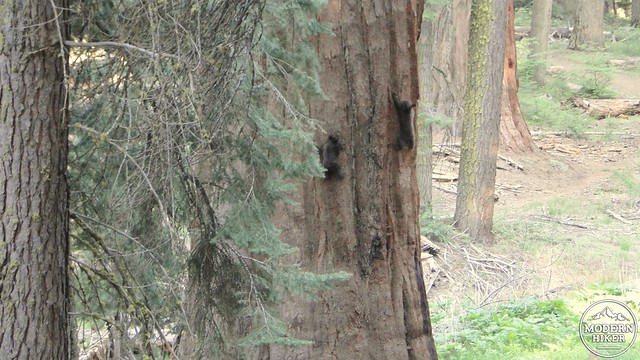 Can you spot the bear cubs climbing the sequoia?

After the bridge is a four-way junction. The path dead ahead will lead to Sunset Rock. The path left is the return journey. The path on the right is the connector to the Big Trees Trail. Take the right and pass along the edge of the meadow. The trail will pass a large, signed sequoia tree that has been dubbed the Clara Barton tree. It’s kind of sad that the only tree named after a woman in Giant Forest is tucked off on this relatively obscure, unnamed trail. Anyhow, this trail will connect at the base of beautiful Round Meadow, which is surrounded by some spectacular sequoias. You can make this loop in any direction, but my directions are laid out counter-clockwise. 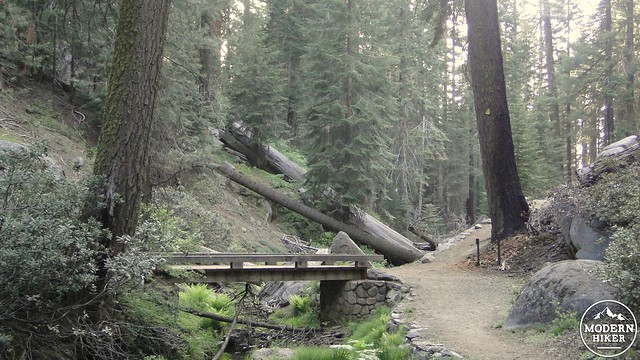 Junction between various connectors and the Sunset Rock Trail

Taking the path bearing right, you will immediately begin skirting the southern edge of the meadow. Depending on the time in the summer, the meadow will either be full of fresh, green plants, carpeted in wildflowers, or slowly withering. Along this path you will find a number of interpretive signs explaining how this area is prime sequoia habitat due to a combination of different factors, including abundant water, deep enough soil, and sun exposure. These interpretive displays will tell you a great deal about sequoias. They will slow the hike down a bit, but there’s nothing wrong with savoring the scene at this beautiful meadow. 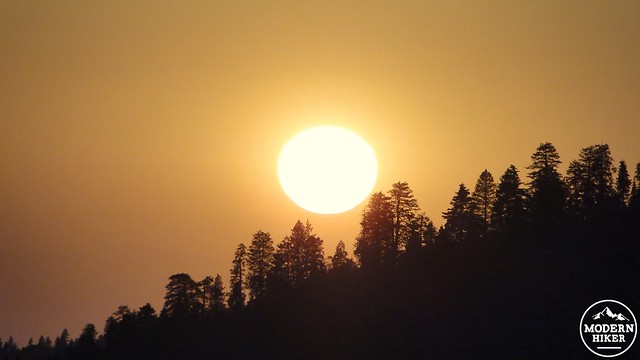 The trail will continue its leisurely loop, eventually transitioning from pavement to boardwalk at the wetter west end of the meadow. Be on the lookout for flowering dogwood, which puts forth large, showy white flowers during spring. You will be surrounded by lush growth on all sides, as the meadow extends on both sides of the boardwalk. An interpretive sign explains that sequoias don’t have a lot of success growing in moist soil, as the soil is not sturdy enough to support their massive weight. Many of the sequoias growing on the meadow edge will eventually topple. And by eventually, I mean they may topple anytime within the next thousand years. 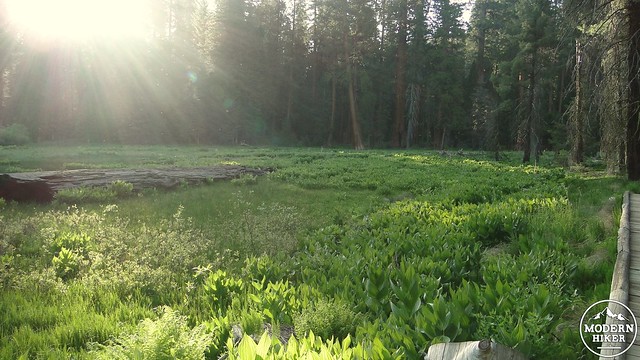 The trail will continue to bear left as it passes along the creek that feeds this meadow. It will then pass a large paved spot with cobbled stones representing the base of the tree that crushed the park superintendent’s house. This feature will give you an appreciation for just how wide sequoias get at their base. I could easily fit most of my apartment into the space that this tree occupied. The Big Trees Trail will conclude at the same spot where the connector trail ended. Follow the connector trail back along the way you came, past the Clara Barton tree and the meadow to the junction next to the bridge. If you turn right, you can take the .7 mile out-and-back trip over the Sunset Rock. I had intended to track this part of the trip for direction, but at this point I had already hiked a great deal and was feeling pretty tired. Suffice to say that the trail to Sunset Rock is smooth and easy to find. You will know you’ve reached your destination when you come to a huge open space created by a large, smooth granite outcropping. The rock gets its name from the opportunity it provides to catch great sunsets, although a nearby ridge obscures the sun’s descent during the late spring and early summer months. 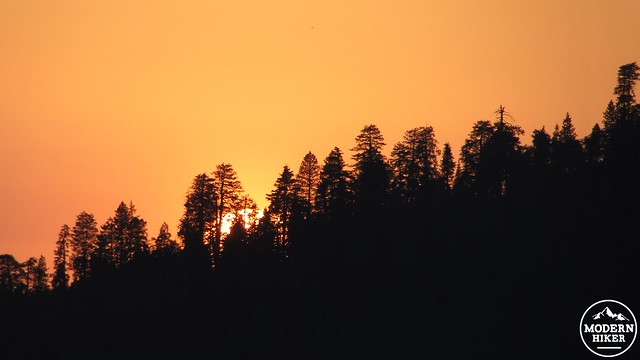 If you elect to skip Sunset Rock, you will continue going straight onto an unnamed trail as it skirts the edge of the creek you crossed earlier in the hike. The trail will descend for a bit until coming to a creek crossing over a giant sequoia log that has been beveled into a flat bridge. Cross the creek and continue on beneath the cool forest canopy. During the evening, this section of west-facing trail features gorgeous light and shadows and has an air of being far removed from anything. Since this section is a connector trail to an overflow parking lot, it does not get a ton of use. It’s well-maintained, but I wouldn’t expect to see a lot of folks on it. 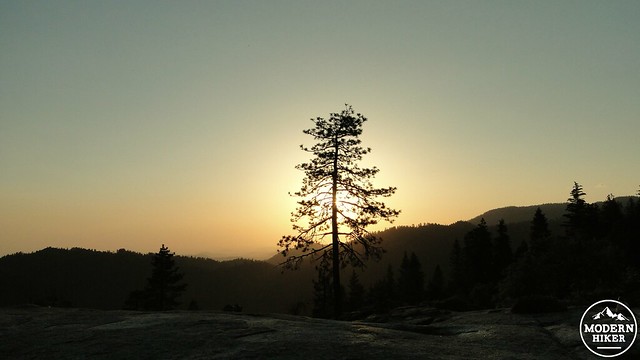 The trail continues around a bend and begins to climb out of the ravine created by the creek you just crossed. The forest dries out a little, and the taller conifers and sequoias are replaced by black oaks, cedars, and pines more representative of Southern California forests. Now, here is where the trail gets a little wonky. After this section, the trail will dead-end into a decaying road. As you might notice from the GPS, I turned right before figuring out the correct path. Going right takes you to a building that you don’t really want to visit (unless you do, in which case go crazy). Going left takes you to the overflow parking lot along a dirt road. The parking lot is a confusing spot since there’s no indication of where the trail is. To make it past this section, keep to the right of the lot toward the entrance road. You’ll notice a bathroom with a covered structure nearby. This is where the trail resumes. 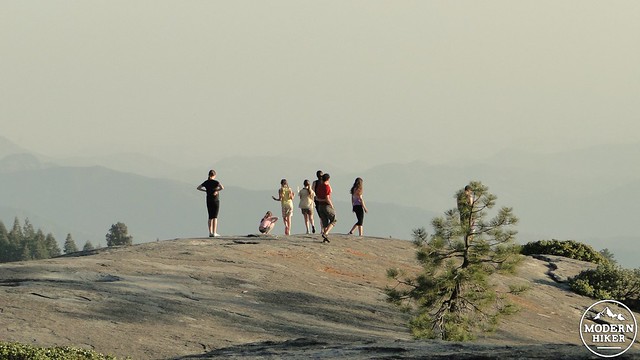 The paved trail from the bathroom rounds another bend and climbs a bit before emerging at Beetle Rock. Beetle Rock is another granite outcropping that interrupts the forest and provides more great views to the west. This comfortable spot is fun for casual scrambling and exploring, and it is a paradise for kids who like to poke around boulders, find and chase lizards, or otherwise enjoy what is essentially a natural playground. The sunsets here can also be quite nice, although the sun sets into a ridge during the late spring and early summer months. 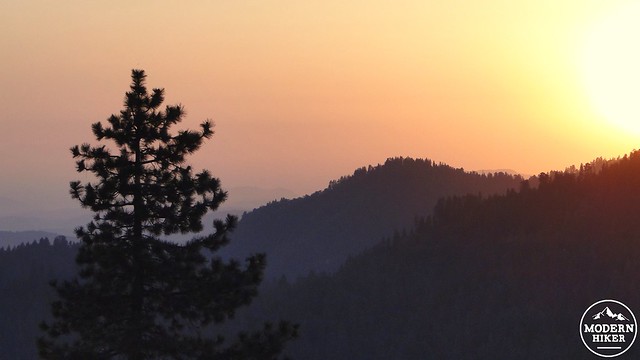 After you’ve completed your frolicking at Beetle Rock, you will find a trail near a large structure. This is the Beetle Rock Nature Center, which caters to families with children. I have to confess that I haven’t been inside it. Nor can I claim to have visited the nearby Giant Forest museum.  However, both destinations may very well be informative and entertaining, and therefore worthy stopping points on this hike. There is a paved trail that will lead back down to the parking lot from which you started. Follow it, and make your way back to your car.

From here, you may wish to stop at the museum and see what it has to teach about the human and natural history of Giant Forest. Or, you may wish to wrap it up and put a bow on it, possibly with the promise of crackling campfires, ice cold beverages from the ice chest, and tasty treats roasted over a campfire. Whatever the case, you just completed a jam-packed 2.2 miles. This is a great low-effort, high-reward hike introducing Giant Forest. It is almost perfect in this regard, save for the weird detour through the parking lot. However, that’s a small price to pay for such a high awesomeness-per-square mile ratio.

With the exception of the confusing section near the overflow parking lot, the trail is very easy to follow, and is often paved and guided in some spots. During the winter and spring, it is likely that snow would blanket the trail, however, Round Meadow and Sunset Rock are easy to follow.

The nearest campground is Lodgepole Campground

From Visalia, take Highway 198 through Three Rivers, past the park entrance, up the side of the mountain, and into Giant Forest. At the Giant Forest museum, turn left into the parking lot before the crosswalk.

Hi Scott, Thanks for all of the very useful information on the Sequoia Trails. I too have been visiting often and love hiking. I am an artist working on an all Sequoia show at Arts Visalia in May 2017 and have been collecting resource material for my show. I did a blog article on Round Meadow http://www.joycollier.com/?page_id=324 . Being a senior and not in the greatest of shape has made me hesitant to follow some of the trails, now thanks to your info I will restrict my adventures to those Easy and Easy-Moderate.

"As you might notice from the GPS, I turned right before figuring out the correct path. Going right takes you to a building that you don’t really want to visit (unless you do, in which case go crazy)."

Do you have any idea what this building is called or what the trail is called that leads you to it? I believe I ended up at this building when looking for sunset rock. We took some trail near sunset rock and ended up at a smaller granite rock that also had a weather station (or some kind of nature research station). I've been trying to figure out where this was or what it was called. Thought you might be able to help. Thanks!