On the north end of sprawling Cuyamaca Rancho State Park lies one of the loveliest landscapes in San Diego County. With manmade Lake Cuyamaca at the center-point, this area boasts miles of grassy meadows strewn with wildflowers and bewhiskered with an open forest of Jeffrey pine and black oak. Although beautiful year-round, this hike takes on a special quality during spring when Lake Cuyamaca fills to the brim and carpets of wildflowers blanket the meadows. The fall season is nearly equal in beauty, as the area’s black oaks put on a surprising fall color display in late October and early November. 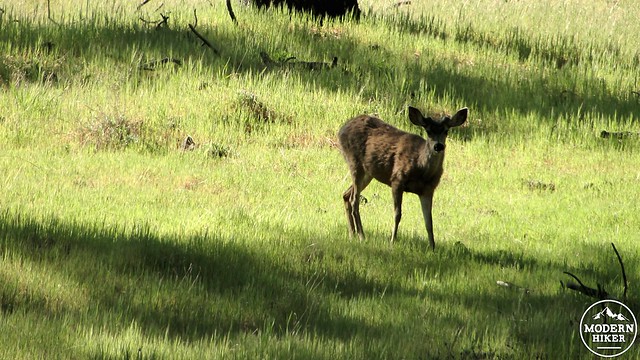 Lake Cuyamaca was created in 1888, and the dam holding in the water is the second oldest in California. The reservoir was originally created to provide water to a very thirsty San Diego, and it wasn’t long before several species of fish were introduced, turning the lake into a mountain fishery. When San Diego County introduced the larger El Capitan Reservoir, Lake Cuyamaca’s primary use as a reservoir fell by the wayside. The lake remained unused for a long period of time until the Lake Cuyamaca Recreation and Park District began governing the lake and reintroducing trout into the cool, serene waters. The lake remains a haven for local fisherman. 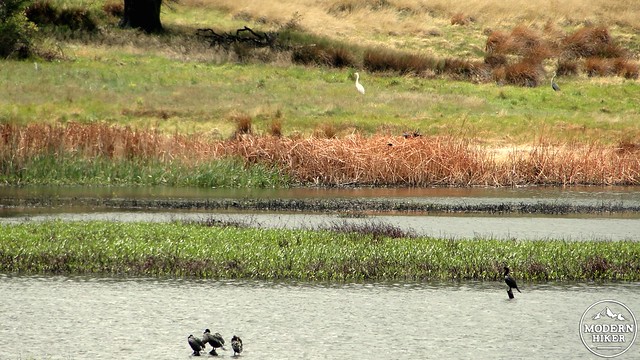 Waterfowl in the marshy area south of the lake

Meanwhile, gold strikes in the 1870’s led to the opening of the Stonewall Mine, which was named after General “Stonewall” Jackson. Stonewall was the county’s most productive mine, producing the modern equivalent of about $60 million in gold. The town of Cuyamaca, population 500, sprung up around the mine and disappeared just as quickly when the mine shut down. Today, there’s a lot of evidence of mining gear, as well as some informational displays that will tell you about the area’s history. 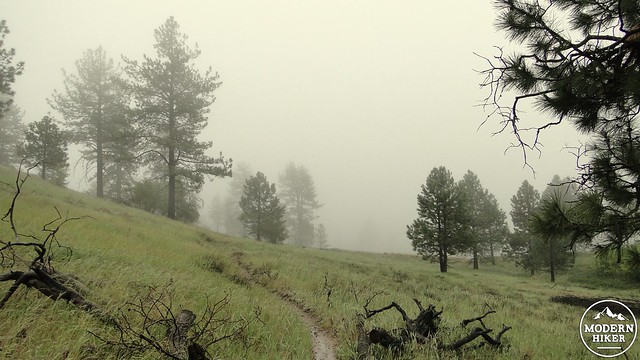 Pine woodlands during an April storm

Today, the mine and some of the area around Lake Cuyamaca are part of Cuyamaca Rancho State Park. The park protects 26,000 acres of San Diego’s “high country,” although much of the park, including this hike, is below 5,000 feet. Although most of Cuyamaca’s forest was destroyed by the 2003 Cedar Fire, the forest around the lake and the mine were spared. This is one of the few places in the park where one can walk underneath shady Jeffrey pines and black oaks without the constant reminders of ecological devastation. 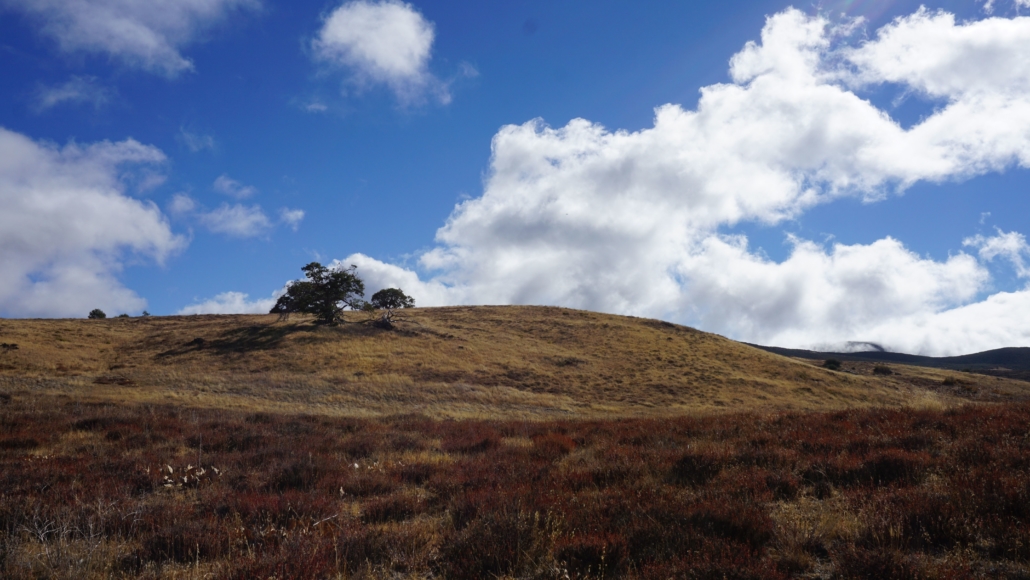 From the trailhead, find and follow the Marty Minshall Trail into a thicket of willow trees nourished by creeks draining the northwest slopes of Cuyamaca Peak. This area gets very swampy following rainstorms, and if there’s been heavy rain recently, you may want to wait for this section to dry out a bit. Negotiate an unimproved creek crossing, and emerge from the riparian area after 0.2 mile. To the left lies Lake Cuyamaca, which shrinks and expands depending on how much rain has fallen recently. Usually, the lake’s level is low given that drought is standard in Southern California, and this south arm of the lake is often a marshy wetland frequented by a variety of birds, including showier types like egrets, great blue herons, and even the occasional bald eagle. 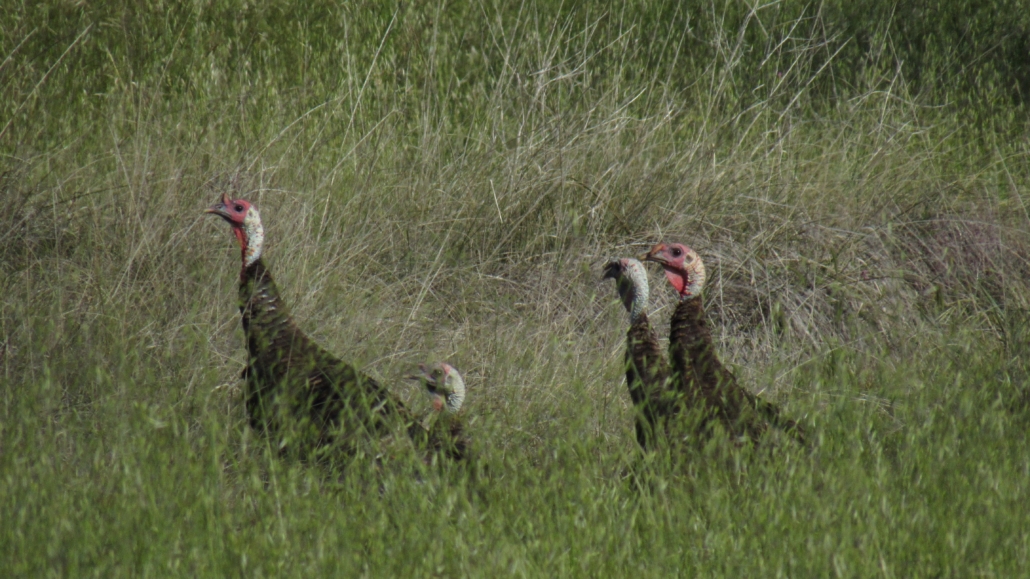 At 0.4 mile, keep left at a junction with the Los Caballos Trail (your return route). The Minshall Trail turns north to follow the banks of the lake. Initially the trail passes through open grasslands before rising up and over a long, earthen dam. On the north side of the dam, the trail begins a broad arc to the east as it passes through dense forest along the banks of the lake. At 0.9 mile, the trail passes a fenced area with a path to Fletcher Island on the other side; you could conceivably pass through the fence to explore the island if you have time. Otherwise, continue on the Minshall Trail’s eastward arc through more dense forest to a junction with an access road that leads south to the Stonewall Mine at 1.6 miles. This 0.4 mile detour leads to the mine, at which you can learn about the Julian area’s colorful gold mining history. 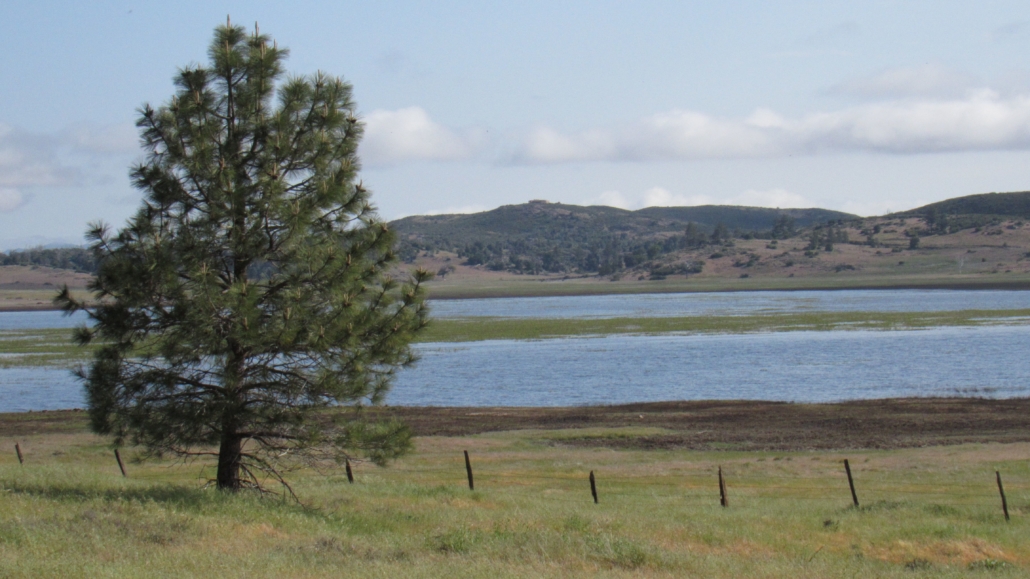 After backtracking to the Minshall Trail, keep right to remain on the trail as it loops around a gently sloping, wooded hill. The trail now approaches the eastern overflow area of Lake Cuyamaca, a vast meadow that erupts with wildflowers following wet springs. This meadow may or may not be flooded, depending on how much water the lake has received. The overflow area extends all the way toward Sunrise Highway, and although the area has not filled up completely in years, the vast expanse of the lake can be an impressive sight when there’s a lot of water. 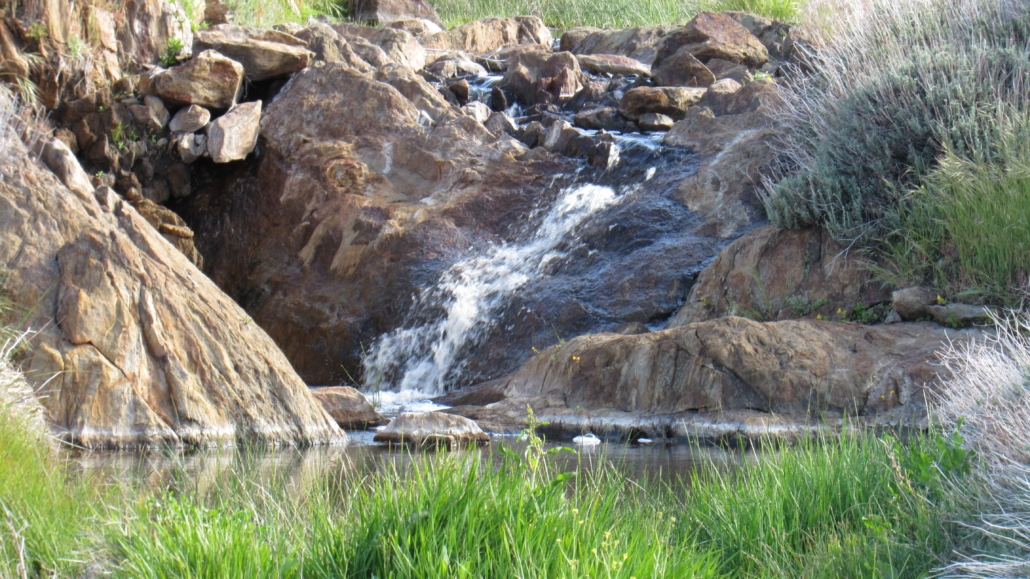 The Minshall Trail turns to the south, passing a junction with a trail that cuts across to the Stonewall Mine at 2.0 miles. After another 0.15 mile, the trail leaves the forest, opening up some of the best views of the vast meadows. The area also receives some of the most impressive wildflower displays in the San Diego mountains, and they tend to peak in early May following wet years. At 2.3 miles, the Minshall Trail crosses the access road to Los Vaqueros Equestrian Campground. The Minshall Trail parallels the road for the next 0.4 mile before climbing up and over a wooded ridge. On the backside of the ridge, the Minshall Trail rejoins the road at the campground at 3.1 miles. Picnic benches and bathrooms, along with the quiet ambiance, make this a perfect place for a leisurely break. 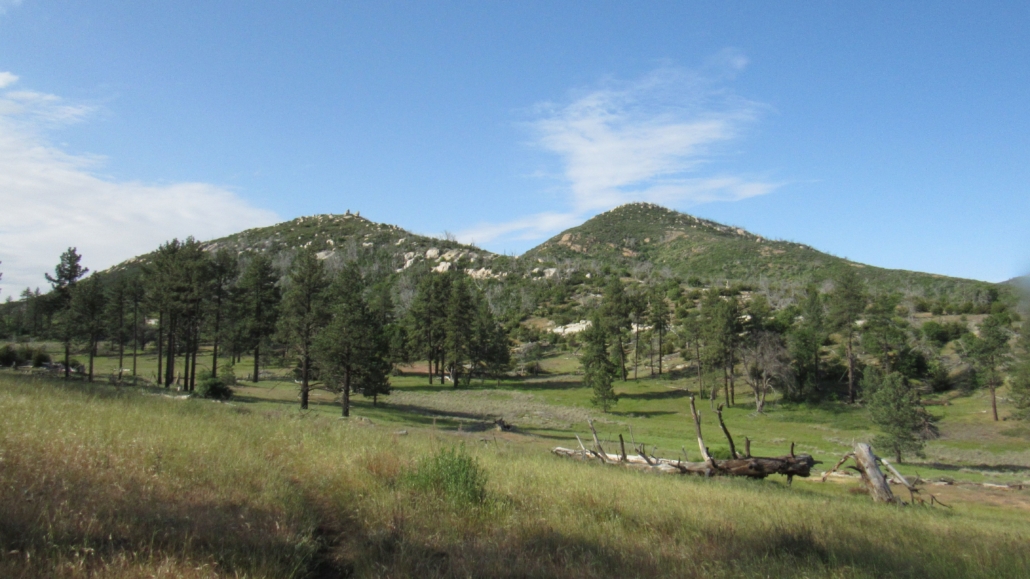 To continue, locate the California Riding and Hiking Trail (herein CRHT) on the southwest side of the parking area for the campground. The CRHT heads west on a gentle incline along the northern base of Stonewall Peak through chaparral and oak vegetation recovering from the 2003 Cedar Fire. At 3.6 miles, the CRHT reaches the northern branch of the Stonewall Peak Trail. If you have time and energy, you can head south on the switchbacking trail to the summit of Stonewall Peak for an additional 3.2 miles of hiking with about 900 feet of gain. This addition makes the hike considerably more difficult, but the impressive views on the climb up to and including the summit are well worth the effort. 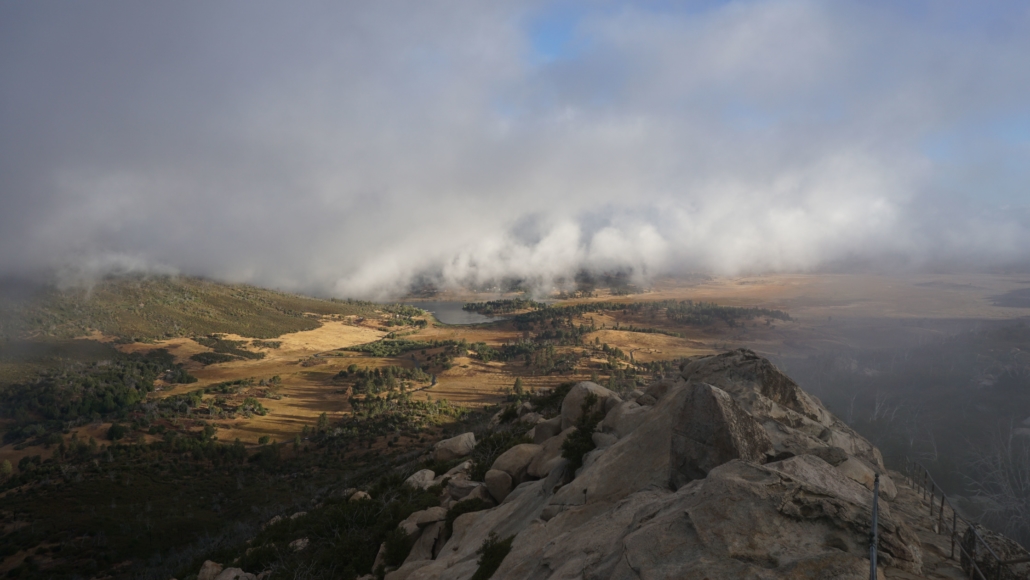 If you’re skipping Stonewall Peak, continue west on the CRHT for another 0.2 mile to a junction with the Los Vaqueros Trail. Turn right here to head north back to the Marty Minshall Trail through rolling hillsides carpeted in grasses and flowers. After crossing the road leading to the Stonewall Mine, look for turkeys and mule deer lounge in the shade of Jeffrey pines along the way as the trail continues a gently meandering tread to a junction with the Minshall Trail at 4.4 miles. Turn left here, and continue for 0.3 mile back to the trailhead to conclude the route. 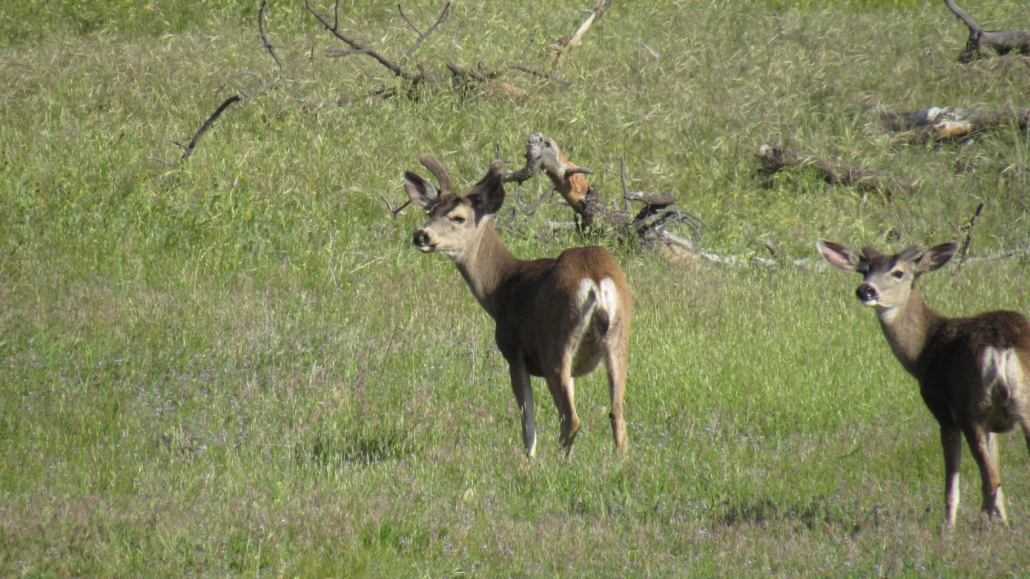 The trail is well-maintained and easy to walk on. It gets confusing at times due to a criss-crossing horse trail and a fence you'll need to pass through. My trip here is a little convoluted as well, making a simple hike a bit more complicated. Not a bad idea to have a map handy if you aren't using the GPS.

From San Diego, take I-8 to Highway 79, turning left toward Descanso. Bear right to stay on 79 and then left to stay on 79 when it junctions with Old Highway 80. From Old Highway 80, continue on Highway 79 for 10.7 miles, passing Paso Picacho Campground, until you reach the Trout Ponds Trailhead on the right side of the highway.

Thanks for the kind words, Carolyn. I'm glad you enjoyed the article. Cuyamaca is a beautiful place, and it holds a special place in a lot of hearts.

Many thanks. Growing up "Cuyamaca" was a repetitious word in our household. My father was born at Cuyamaca when his grandfather was governor. I have appreciation for your work, research and interest. And I am ever so glad to have found this special article. cww