Before moving to Portland, I was semi-aware of a place people referred to as “The Gorge.” I knew that there were hikes there, a large river, a few waterfalls, and that the Pacific Crest Trail crossed over said large river at the Bridge of the Gods. However, I’ve been pleasantly surprised by the sheer number of places to visit in “The Gorge,” encompassing not JUST waterfalls (these are in fact quite numerous), but mountain tops with epic views and challenging climbs as well as fascinating history. The more I learn about the Columbia River Gorge, the more I’m in awe that this spectacular wonder is within easy driving distance of my apartment.

Note: While my gps track showed under 6 miles for this trip, my hiking partner’s clocked in at 6.5. Doing some research, there seems to generally be some discrepancy on the exact milage for this trip. However, the consensus seems to put it at around 6.5 miles.

Case in point: Beacon Rock State Park on the Washington State Park side of the Columbia River. This was my first hike on the Washington side of the Gorge, and I was really excited to be in a whole different state from the one I live in (Californians know what I’m talking about). In fact, the Washington side is pretty much the same as the Oregon side, with the added bonus that on nice days, Mt. Hood peeks out over the mountains and across the river. Originally named by Lewis and Clark on their expedition in 1805, Beacon Rock is a part of an ancient volcano, which now makes up a very impressive rock formation on the shores of the Columbia River. While not the destination for this write-up, hikers have the option to hike to the top of this monolith via a 1.8 mile round-trip hike encompassing 52 switchbacks to the top.

For this particular trip, you’ll be heading inland and upwards to the summit of Hamilton Mountain at 2,483 feet in elevation, climbing 2,000 feet in total. Why climb Hamilton Mountain? Not only are the views astounding throughout the trip, but you’ll also pass several picturesque waterfalls, something called the Pool of the Winds, and see dramatic rock formations that would make any climber drool.

Starting at the parking lot, you’ll notice a large “trail” sign next to the informational board. Shortly after, you’ll encounter the start of the Hamilton Mountain Trail in a beautiful forest of Douglas Fir trees. 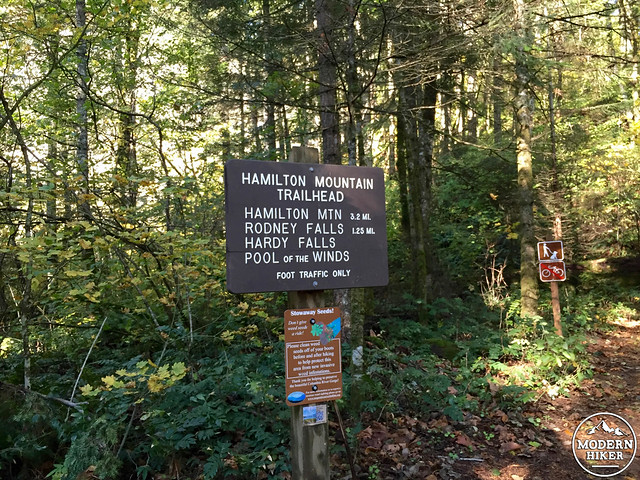 The ascent begins gradually, traveling along a hillside that eventually opens to expansive views down to the river and across to Oregon. Passing under several power lines, you’ll also be able to look upward towards Hamilton Mountain and the ridge below it (yes, you are heading up to the mountain, but I promise the climb is worth the effort). As an aside: this is an excellent fall foliage hike, as you’ll pass through a forest of changing leaves in a myriad of colors. 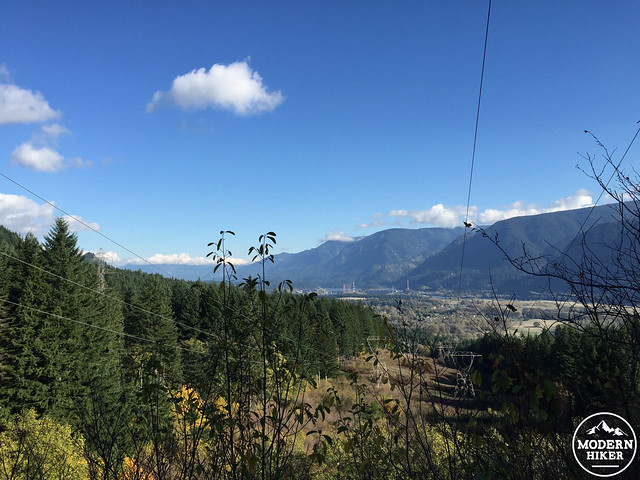 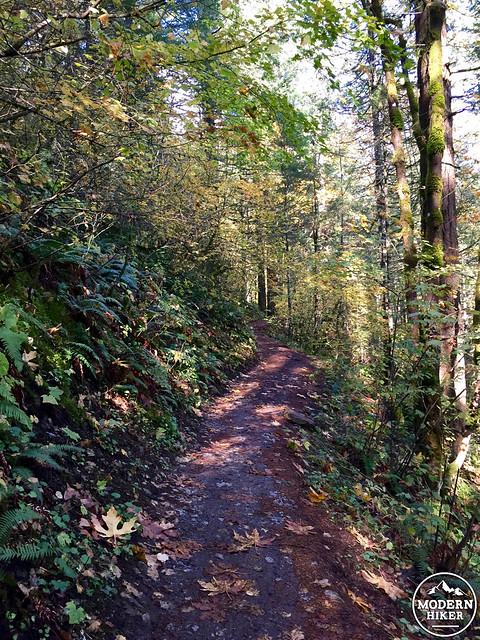 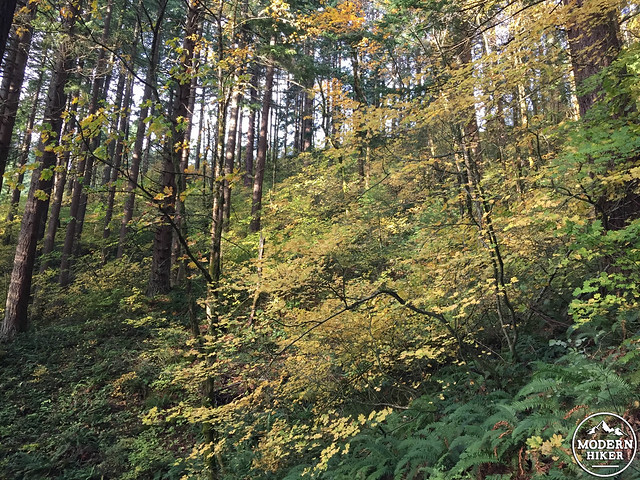 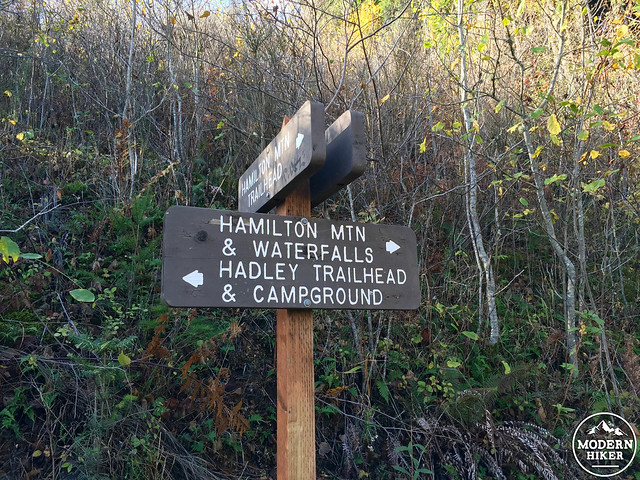 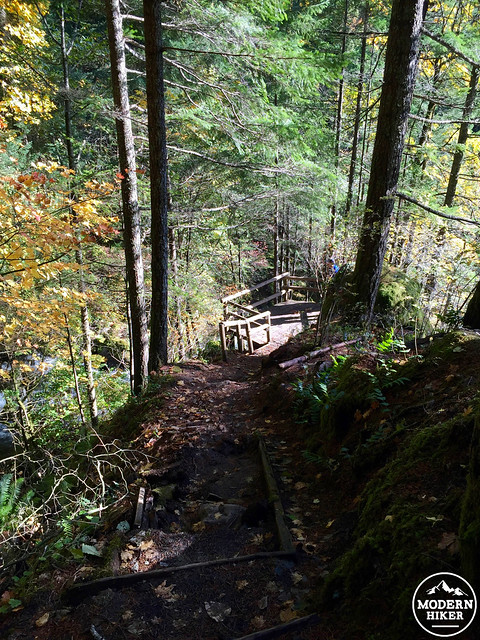 Travel back up the steps to the trail, and continue onward, over a short bridge and eventually to dramatic Rodney Falls, which can be viewed directly in front from a very close and conveniently placed bridge over Hardy Creek. Also of interest here is a short trail to your left which travels upward to the Pool of the Winds just above the Rodney Falls, where Hardy Creek drops into a pool within a bowl-like structure, creating an impressive wind that blasts hikers with cool mist. 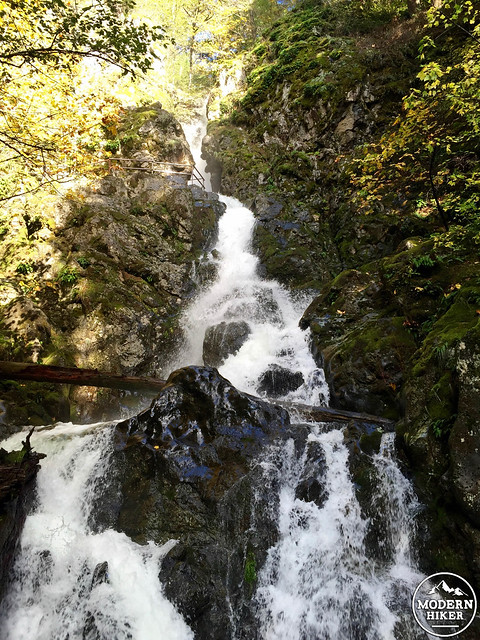 Rodney Falls from the bridge, with the Pool of the Winds viewing area seen at top 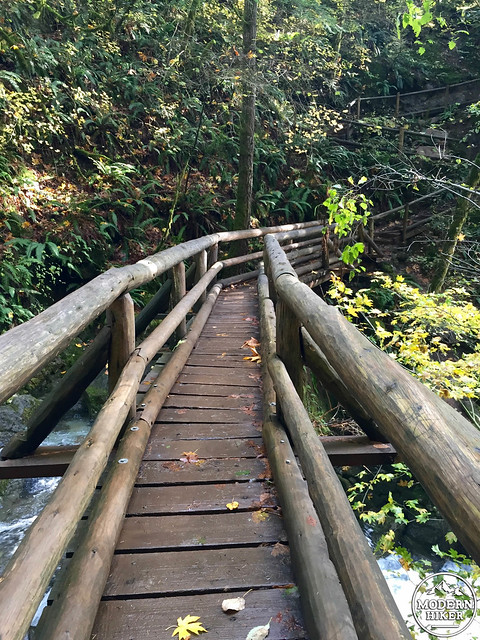 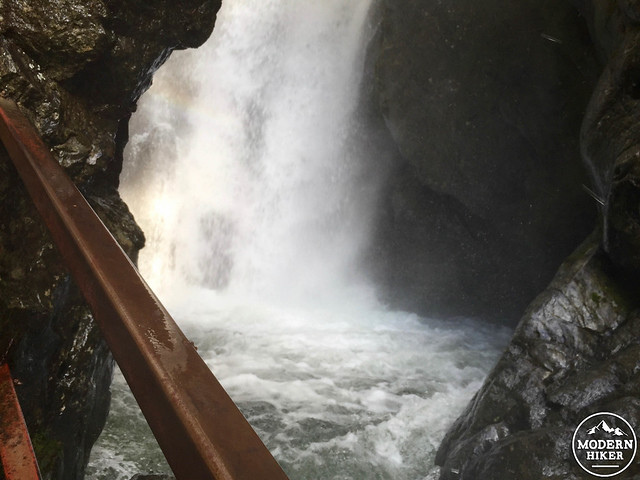 The trail continues over the bridge, shortly turning into switchbacks steadily heading up a ridge. From here onward, the trail become steeper as it approaches Hamilton Mountain. At a junction with the Hardy Ridge Trail, continue straight for the most direct approach to the summit. After .7 miles of steady climbing, you’ll reach a dramatic viewpoint looking down into the Gorge, with striking rock formations to your left. 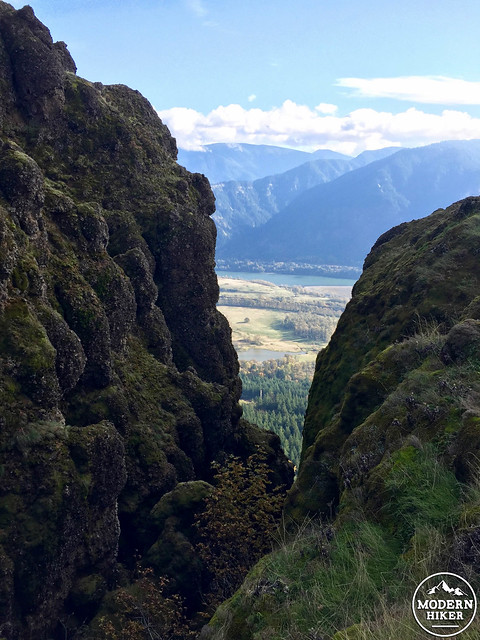 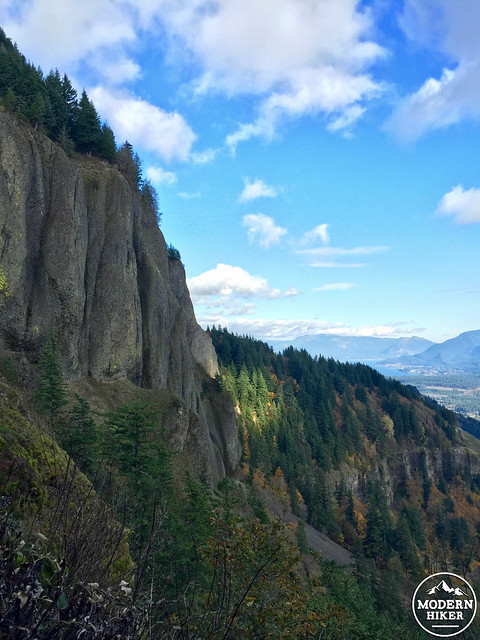 Continue along the ridge, which heads steadily upward at an easy pace with fantastic views. After around .3 miles, the trail again begins to steepen and switchback again as it approaches the summit. Eventually, the trail will reach the top, with easy views to the east looking towards Mt. Adams and Table Mountain (on our trip, we could just see a impressively snowy section of Mt. Adams under the clouds). While we weren’t able to find any specific marker noting Hamilton Mountain (further research indicates that one may exist, or previously existed), we did in fact make it to the top to enjoy a very chilly breeze, a few snacks and the amazing view towards the river and of particular interest, the Bonneville Dam (portions of which were declared a National Historic Landmark in 1987). 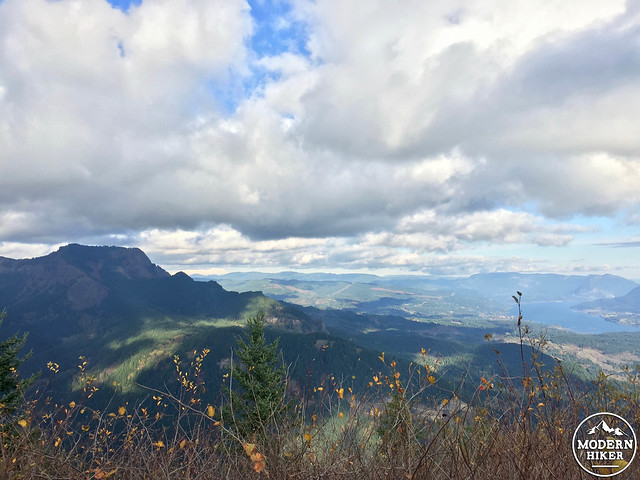 From this point, you’ll head back the way you came, heading down the ridge and towards the parking lot, enjoying spectacular river views looking towards the west. Alternatively, hikers may return via the more gradual Hardy Creek Trail, making a loop that will eventually meet up with the Hamilton Mountain Trail, adding roughly 3 miles to the return trip. 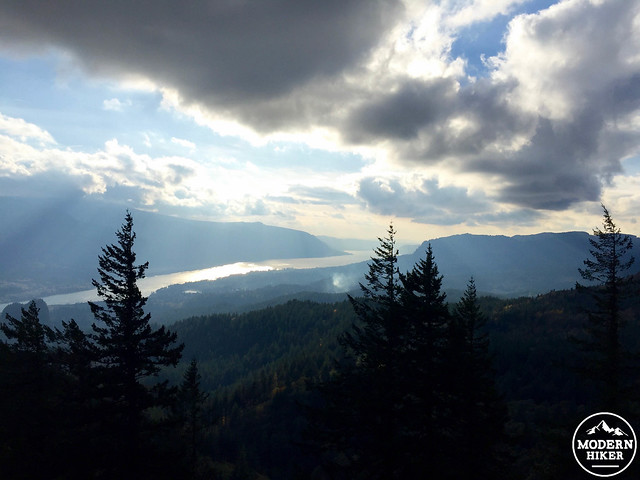 Park information: Beacon Rock State Park provides this semi-useful map, as well as this overview of the Hamilton Mountain hike.

Mud + water on the trail: Waterproof shoes are a good option for this hike.

Very good, well marked and easy to follow, with a small number of steep sections near the top. A few sections may be muddy during wetter times, especially during the winter and spring.

The main campground at Beacon Rock State Park is open seasonally, generally starting in April through late September. It's the ONLY gorge campground on the Washington side between Portland and Hood River, and offers beautiful sites in a forest. Other times of year there are two first-come first-serve tent sites available at the Park's marina by the river, as well as five RV hook-up sites at the Woodard Creek Campground also next to the river.

From Portland take I-84E. At exit 8, get on I-205N, heading into Washington State. Right after crossing, take exit 27 towards Camas/Hwy 14 E. After roughly 28 miles, you'll see Beacon Rock State Park along the main road. During the summer, proceed past Keuffler Road on your left, to the next left onto a paved road across from (the very noticeable) Beacon Rock. Drive a short ways up the road where you'll enter a paved parking lot (road may be closed in winter). Fee required.