If one were only to travel to Giant Forest in Sequoia National Park, one would believe that the sequoia groves of the Sierra Nevada mountains were all large, easily accessible, beautiful preserved, and largely free of man-made tragedies. Sadly, this is not the case, as many of the range’s sequoia groves have encountered long periods of unfettered abuse through logging and human development. Although sequoia trees are next to useless as timber, numerous mills sprung up within groves to attempt to log and process the trees. Given that sequoia timber is only useful for shingles, fence posts, and toothpicks, it remains particularly senseless that so many trees were lost before conservation was achieved. 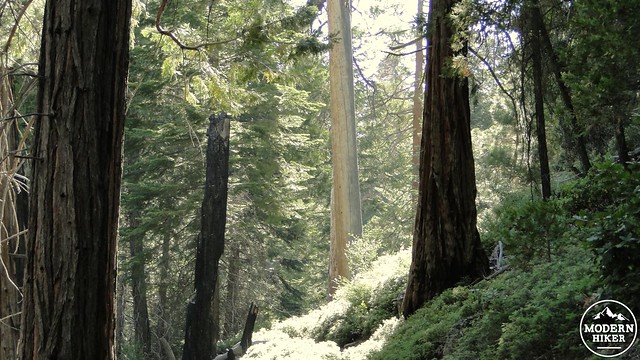 The Atwell Mill Grove is the site of some of this destruction. The most accessible part of Atwell Mill Grove lies along Mineral King Road, and the campground is distributed through the most developed and affected parts of the grove. Walk through the campground, and you are likely to see enormous stumps surrounding by dense stands of young sequoias. The eponymous mill for which this campground is named processed numerous sequoias before the National Forest assumed jurisdiction over the land and prevented further logging. It’s heartening that so many young sequoias have taken root and shown signs of thriving. However, many of the stumps in the campground suggest that enormous trees once stood here. 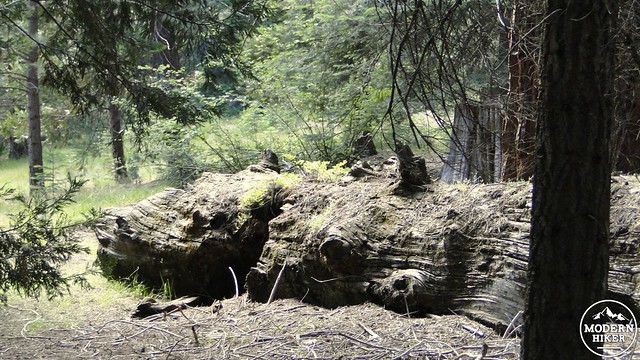 Fallen sequoia near the mill site

On this particular hike, Atwell Mill Grove is only one of the accessible groves. This trek also travels into the East Fork Grove situated along the East Fork of the Kaweah River. Also unlike what one would expect from Giant Forest’s relatively flat and open groves, the East Fork Grove is densest along the banks of the river, while the rest of the grove grows up the steep hillsides on the southern bank. This hike does not explore the grove in depth, but it will lead to a magical scene featuring a cascading waterfall, a bridge, giant sequoias, and probably some wood nymphs and satyrs. 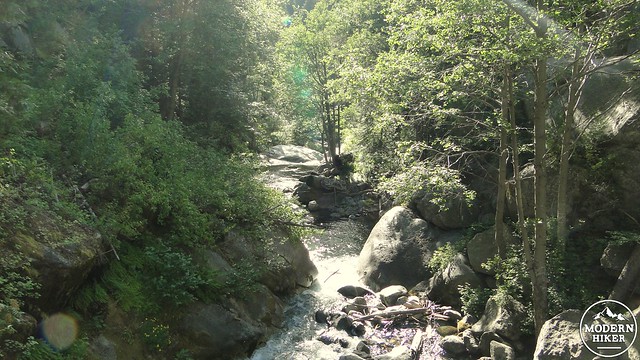 Start the trail by parking in the Hockett Meadow parking lot just outside the Atwell Mill Campground. From the parking lot, you will have to walk west through the campground while following signs indicating Hockett Meadow. This trail will not reach Hockett Meadow either, as it is a 19 mile round trip hike best enjoyed as a backpacking outing. After passing site 16, the trailhead will appear alongside a meadow with some rusting mill equipment and a large sequoia stump. This is the site of the mill, which is, fittingly, being overtaken by sapling firs and sequoia trees. 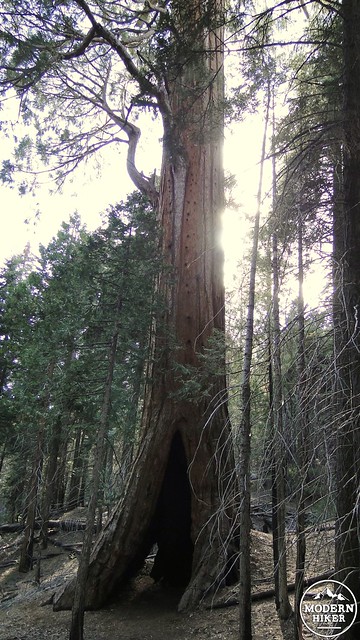 Sequoia tree on the way down

The trail will soon begin to descend into a lush mixed-conifer forest. This is at the extreme southern boundary of Atwell Mill Grove, and there are only a handful of trees from that grove along the path. The sequoias that are present are located along small tributary streams tumbling down the hillside from the main portion of the grove up the hillside. While there aren’t a lot of sequoias here, the remaining trees, many larger than average, remain quite lovely. You’ll also see the sequoias’ typical companions, including ponderosa pines, sugar pines, Jeffrey pines, white firs, incense cedars, and the occasional black oak. 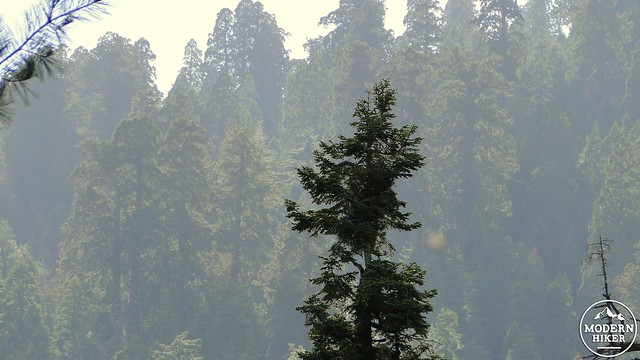 Silhouette of a white fir against a backdrop of sequoia crowns

The trail continues its steady descent, which is pleasant enough now but will be a somewhat tough climb back up, especially during the heat of the day. The trail will wind in and out of ravines, some of which have trickling streams and a handful of sequoias. Occasional views to the opposite bank of the East Fork emerge in gaps in the trees, and it is possible to make out the crowns on the opposite slope indicating the East Fork Grove. Closer afoot, patches of wildflowers, including lupines, bear clover, ceanothus, and patches of ferns liven up the dusty trail. 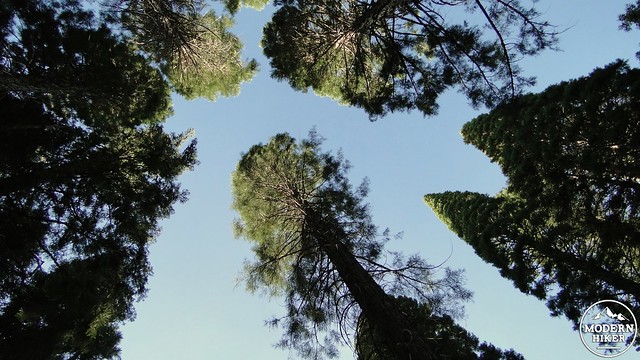 After about 500’ and 1.5 miles of descent, the sound of rushing water becomes audible. The trail will continue to dip until passing a few stately alder trees, indicating that the river is almost there. The path makes a bend to the right to a bridge over the river. Walk halfway across the bridge and look left to find the tumbling waterfall. To the right, the placid East Fork of the Kaweah River continues on its meandering way to Lake Kaweah near Three Rivers. This branch, along with the North Fork and the Middle Fork (fed by the Marble Fork) give the town of Three Rivers its name. 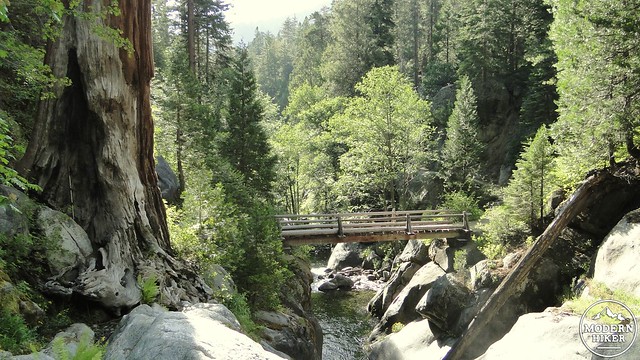 Have you seen the bridge? Where is that confounded bridge?

As stated before, the site of the bridge is magical, and it feels like it comes straight out of a romanticized nature painting. Massive sequoias cluster on either side of the falls, while alder trees cast deep pools of shade along the river. Come here about an hour before sunset, and the light will make the scene all the more magical. Just past the opposite side of the bridge is a small use path that will allow you to explore around the base of one of the largest riverside sequoias. Use caution exploring, as the river is swift and relentless past the falls. With caution, you’ll observe wildflowers, ferns, and mosses, as well as enjoy both the falls from slightly above and the sight of the picturesque bridge crossing the river. 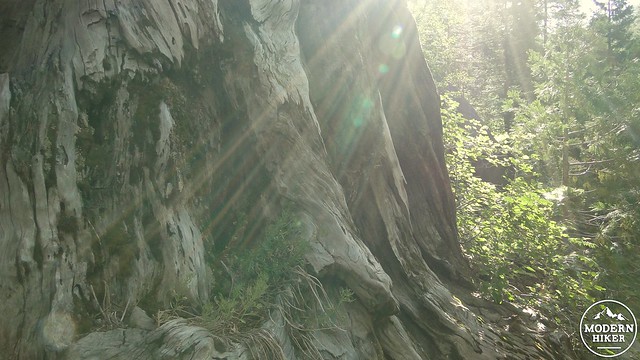 Base of a gnarled old sequoia 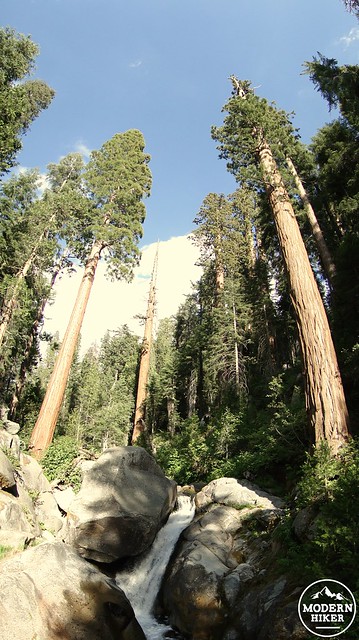 If you wish, you could further explore the Hockett Meadow trail, which follows through East Fork Grove until reaching Deer Creek about ¾ of a mile down the trail. East Fork Grove does not feature a lot of large sequoia trees, although it is lovely in its own way. The bridge and falls are by far the best site here, so if you’re just looking for a short hike, the bridge is a good turnaround. Be mindful that the return journey will require you to climb 1,000’ up the slope back to the campground, so do save your energy on the journey down. 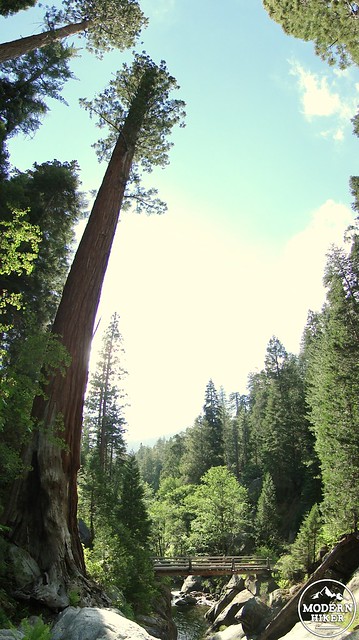 After enjoying the bridge, simply retrace your steps up the hill and back through the campground. If you’re camping at Atwell Mill Campground, this site is a must-see. It is still a great short hike regardless of where else you may be staying in the Mineral King area, as the bridge and waterfall scene is both beautiful and unique when it comes to the sequoia groves in the Sierra Nevada mountains. 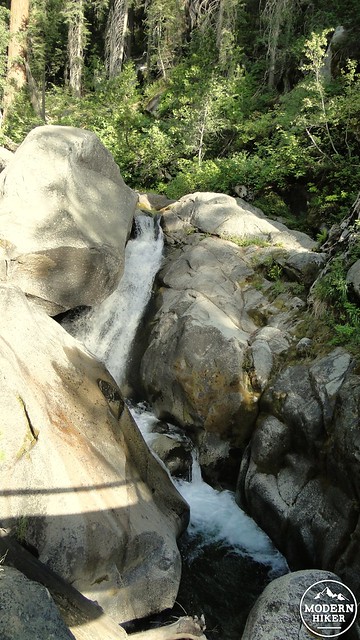 The trail is well-maintained, smooth, and easy to follow. There's something about the earth in sequoia groves that makes for particularly nice walking.

Atwell Mill Campground is a small camp that's right near the trailhead. Snag a spot there if you can!

Take Highway 99 north to Visalia and transition onto Highway 198 to Sequoia National Park. Follow 198 through Visalia, Lemon Cove, and into Three Rivers. Turn right onto Mineral King Highway and follow the narrow, twisting road into the forest, until you reach Atwell Mill Grove Campground. Turn right and find the trailhead indicating "Hockett Meadow."