Just past the city of Escondido, Highway 78 winds through agriculturally rich San Pasqual Valley before emerging in the narrow confines of Clevenger Canyon. This canyon has been carved out over the eons by Santa Ysabel Creek, which drains the Volcan Mountains before snaking its way through San Diego’s northern backcountry. The canyon boasts the San Pasqual hiking trail network, in addition to providing access to nearby Boden Canyon and Orosco Ridge. 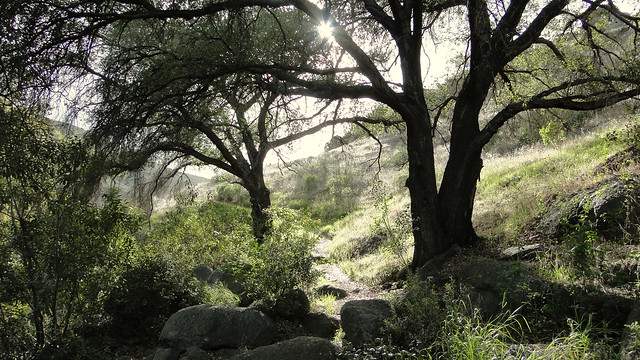 Near the bottom of the Canyon 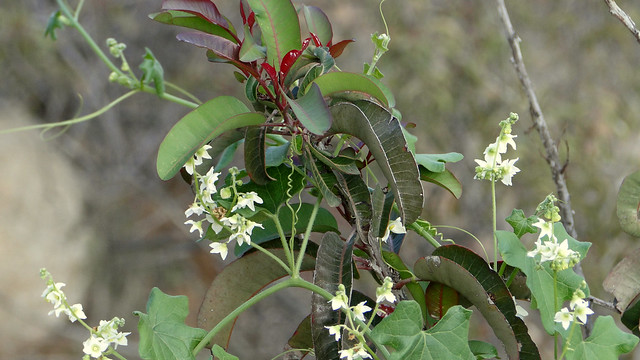 This write-up covers the north side of the San Pasqual trail network, and only to a viewpoint toward the north rim of the canyon. Additionally, the south side will be left out as the north side has better views, which encompass the open valley of Ramona with the Cuyamacas and Volcan Mountains in the distance, while the westward view features a sliver of the ocean. While the south side is a little more verdant, the north trail also crosses over Santa Ysabel Creek, which can either be a dry, sandy creek bed, a series of puddles, or a raging torrent depending on recent precipitation or lack thereof. 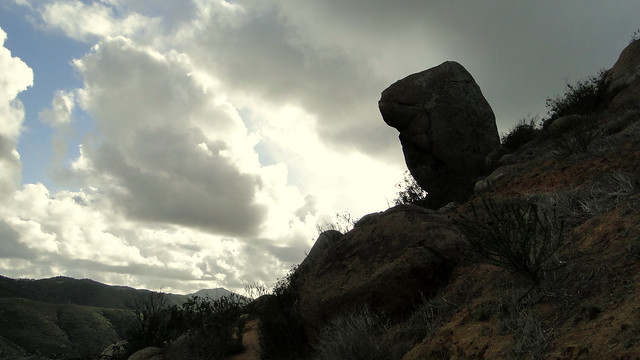 Climbing the north side of Clevenger Canyon

From the trailhead on the north side of Highway 78, find a small gap in a wooden fence near a few piles of granite boulders. You’ll know you’re going the right way if you see and explosion of graffiti on the rocks. In addition to being a good hike, Clevenger Canyon is also a destination for local youth looking for a cool hangout spot. The unfortunate evidence of hangout-ing are abundant throughout the trail, especially on the front end, in the form of graffiti, broken bottles, and short-cuts in the trail. It is unclear how often the county comes here to clean up this section of trail, but it may be time for some volunteer effort to step in.

The trail immediately begins to descend, first over staircases and then along a gently-graded slope. The trail finishes its descent at the banks of Santa Ysabel Creek, which is itself a nice place to stop and rest. The creek is shaded by a number of different trees, including willows, sycamores, cottonwoods, coast live oaks, and a few rare Engelmann oaks. As mentioned earlier, the creek is generally nothing more than a trickle with a few puddles, but during times of exceptional storms the creek may flow at a level that is dangerous or impossible to cross. Do not attempt this hike if a major storm system is either occurring or has just rolled through the region. 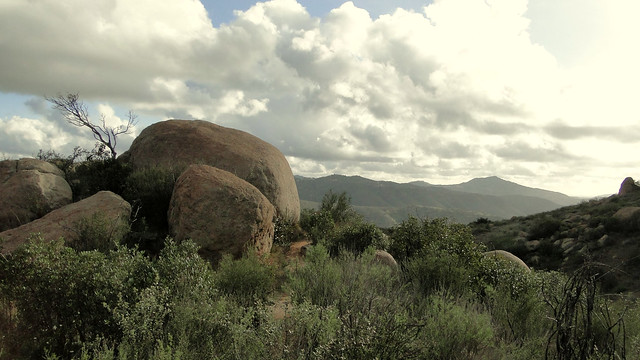 At the bottom of the canyon, you will cross the creek and pass through more riparian woodland before the trail begins to climb up and onto the north side of the canyon’s sloping wall. You’ll see a mixture of grasses, coast sagebrush, laurel sumac, chamise,  yucca, and a host of wildflowers blooming in the spring. During the warmer months, this hillside can look pretty lifeless and barren, but it comes alive with wildflowers and climbing vines after a modest amount of rainfall. 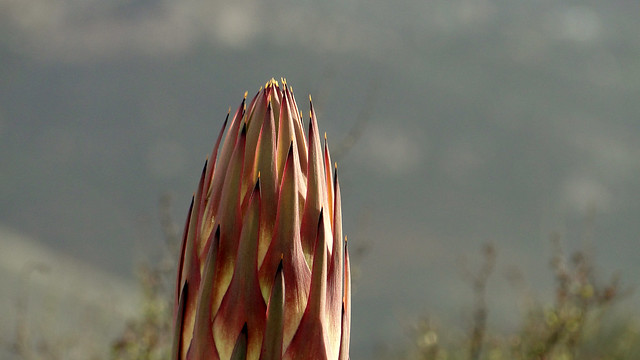 The trail will round a bend before commencing a long climb up the slope. You’ll encounter a lot of the granite boulders so common throughout San Diego’s interior between the 15 and the Peninsular Ranges. Although few of the boulders are as impressive as the boulders on Woodson Mountain and Iron Mountain, there will be a few spots with large or improbably balanced boulders adding some drama to the landscape. 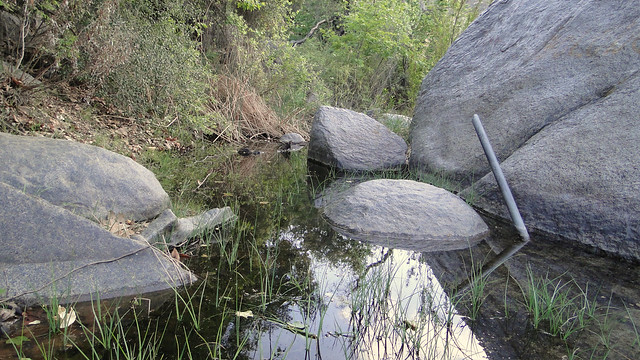 As you climb, you may notice that there is a lot of short-cutting on the trail. The main shortcut appears to run straight up the hill at a ridiculously steep grade. Every time I see a shortcut like this I wonder how and why somebody would elect to come up or down such a steep slope before saying a little prayer for the health of their knees. It happens often enough though that the shortcut is prominent, and I encourage hikers to avoid adding to the shortcut as it further increases erosion and takes away from the natural beauty. Beside, the main trail is a lot more comfortable to walk on, up or down, and it won’t take nearly as much out of you as the steep climb. 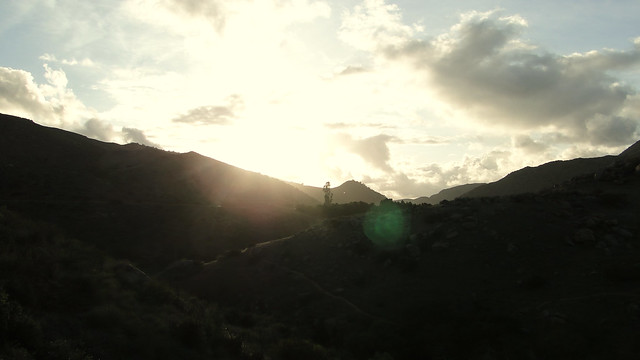 As you climb, the view to the south will steadily improve. At times, the trail will round itself as it switchbacks, which opens up views into San Pasqual Valley as well as east toward Black Mountain (the Ramona version) and the Volcan Mountains. Go higher still, and you’re likely to catch glimpses of the Cuyamacas before a much fuller panorama of Ramona emerges. With the combination of the mountains in the distance and the canyon view below you becoming increasingly more impressive and interesting, you will slowly earn a very fine view through your uphill efforts. 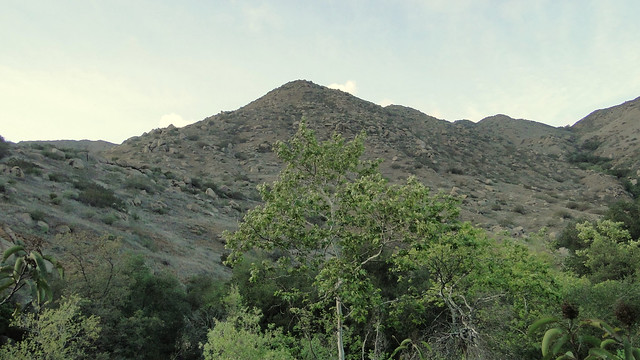 Looking up from Santa Ysabel Creek

As you continue on up the hill, you will pass a few really large boulders before the path takes a bend to the right and begins to even out a bit. The chaparral starts to get a little thicker and more varied, introducing some manzanita and a few other plants I’m not familiar with. A signed junction will come up on the right leading to a view point. To reach the viewpoint, which is on top of a large granite boulder, turn right and push your way through some scratchy chaparral until you see the boulder. Whether you climb up or stay down, this is the fullest expression of the view on the trail. 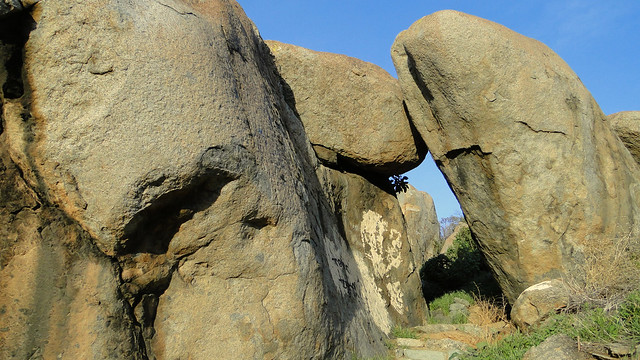 Granite boulders near the trailhead

Should you continue on the way you were going before the spur to the viewpoint, the trail will continue to undulate and meander before eventually petering out. There is a plateau covered in oaks and grasses further on, but this is private property and off-limits to hikers. Your best turnaround option is the viewpoint.

The trail is well-maintained in most spots, although erosion has made some passages a little sketchy. Numerous shortcuts cross the main trail. The shortcuts are easy to ignore and should be since following them will increase erosion and further confuse the trail.