Never doubt that a small group of thoughtful, committed citizens can change the world.

Indeed, it is the only thing that ever has.

In our glittering world of megamalls and high-rises, the constant push for development has a profound impact on our relationship with the natural world. Unprotected wild lands continually recede in the shadow of towering concrete and “progress,” which devastates wildlife habitat, threatens natural resources, throws ecosystems out of whack, and further erodes the connection between humans and nature. It’s easy to feel helpless when faced with the complex, well-funded systems that call up visions of a modern David and Goliath…but sometimes the little guys win.

This is the story of The Wildlands Conservancy.

To understand The Wildlands Conservancy (TWC), let’s take a quick journey back to the early 20th century in Pipes Canyon, a deep east-west gouge that runs from the high desert outpost of Pioneertown thousands of feet up to the pine-tipped peaks of the San Bernardino National Forest. This rugged and remote area was not just a key passage for wildlife, but also became important to indigenous people due to its thriving natural riparian corridor. For that same reason, it also became a hotspot for homesteaders, who built humble cabins, ranched, and mined the nearby hills in the ‘20s. Over the following decades, this style of life quietly diminished and non-residents began using the land recreationally in a sometimes disruptive and destructive manner.

As this activity ramped up, man-made fires became more frequent in the ‘70s and ‘80s, and a collective of local property owners – including relatives of the original homesteaders – realized they had to do something to protect this special place so that generations could continue to enjoy its beauty and unique ecology. This small group formed a conservation vision for the canyon and created the Pioneertown Mountains Conservancy, which in turn led to the formation of The Wildlands Conservancy in 1995.

From these local grassroots efforts – the collective vision of a handful of thoughtful, committed citizens who cared deeply for a specific place – was born a massive effort to protect other lands in order to create and connect larger conservation areas. In all, TWC now manages twelve preserves scattered across California, totaling over 145,000 acres from the mountains to the desert, from the ocean to inland rivers. Their mission is to not just protect these beautiful, ecologically important places, but also to provide opportunities for people – especially children – to develop a lifelong appreciation for the outdoors. 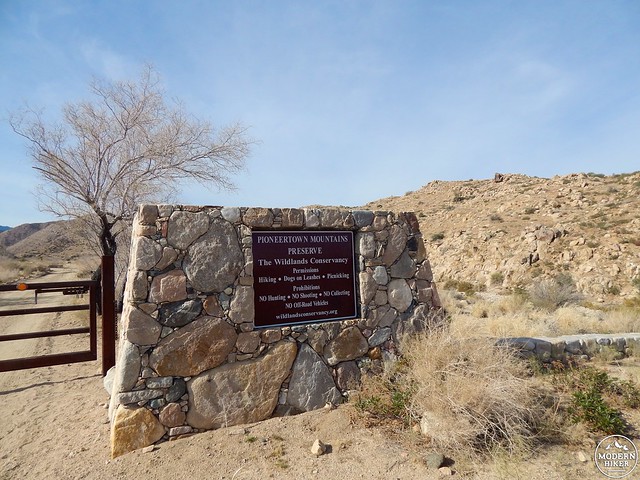 The Pioneertown Mountains Preserve opened in 1995, the first jewel in The Wildlands Conservancy’s ever-expanding crown of protected lands. Originally covering about 8,000 acres, the site has since expanded to almost 30,000 acres, including some of the organization’s most pristine backcountry in the 20,000 acre Pipes Canyon Wilderness.

The developed area of the preserve is very small – just past the dirt parking lot, you’ll find a covered picnic area, an information board, and a beautiful cabin hosting the ranger station, private living quarters, and a bathroom. But you’re not here for man-made stuff – you’re here to see the natural beauty that struck passion in the hearts of the original preservationists, and for that, we suggest you begin your exploration with a hike to Chaparrosa Peak, a high point with absolutely extraordinary views. 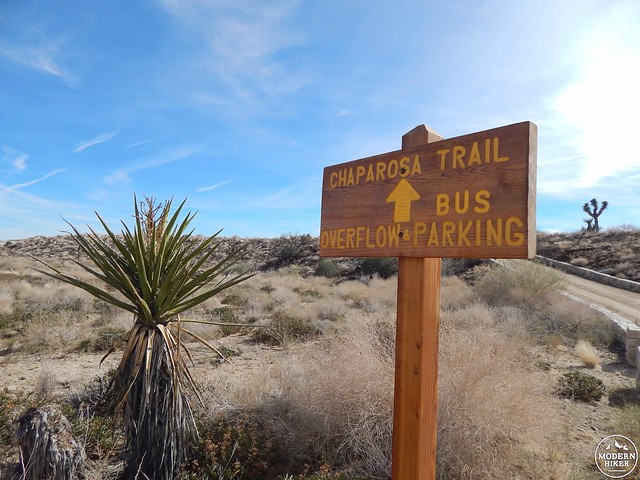 The signed Chaparrosa Trail begins at the end of the parking lot on a dirt road heading uphill. As you ascend, keep an eye out for cars – this road leads to an overflow parking area. Once at the top of the short hill, you’ll spot the jagged peaks of the Sawtooth Mountains in front of you. From here, head left through the dirt lot and look for a small gap in the metal fence, located in front of informational signs and a register. Sign in and head right on a rock-lined path to begin your adventure.

At 0.2 miles, the dirt path continues straight towards private homes, while the marked trail heads right and down to a streambed that you’ll cross several times. If there’s been heavy rain, you might actually find water here. Pipes Canyon is a major riparian corridor – in fact, there’s a wetland in the canyon itself – and there’s almost always year-round surface water in the main channel that draws in thirsty wildlife, although continued drought means that refreshment sometimes lurks just beneath the soil. 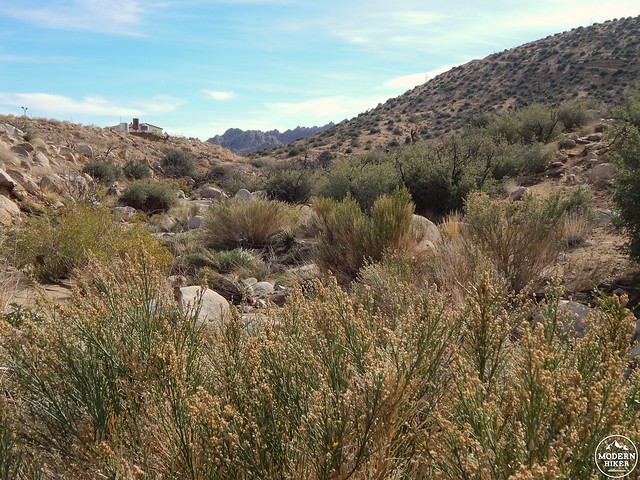 After threading through the sandy streambed, the trail begins heading noticeably uphill around 0.5 miles. As you sweat your way higher and higher, be sure you turn to your left to score excellent views of the dramatic volcanic mesas that dominate the eastern horizon, a very unusual sight in Southern California. Unbelievably, a few years back, developers wanted to erect wind turbines atop these stunning landforms. Luckily, locals once again stepped in and lent their collective voice to prevent destruction of this unique landscape.

As you continue upwards, you’ll come across the first of two metal gates at the 0.7 mile mark; walk around it to the right to continue on the trail. Look down and all around you – you’ll see a vibrant mix of red and black volcanic rock, orange soil, bright green and pale beige chaparral, and if you’re lucky, blue sky – all of this mixed with the more distant pastel desert landscape makes for surprisingly colorful surroundings. 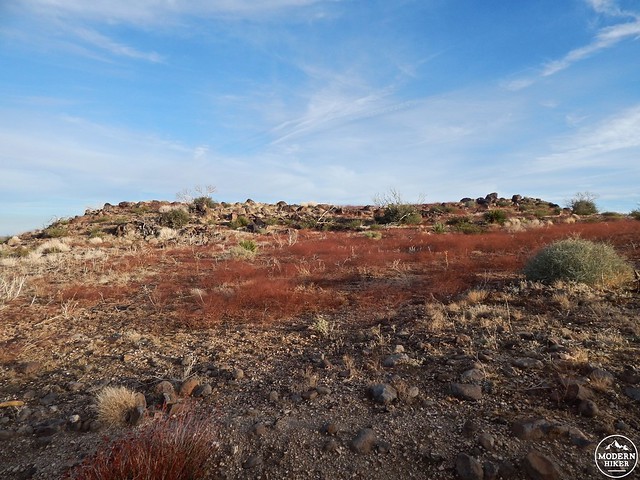 You’ll reach the second metal gate at just under a mile. This one is padlocked, with barbed wire fencing stretched across either side. To get around, simply walk the well-trod path to your left around the pointy stuff and pop back on the trail on the other side of the gate. From here, continue to a large, flattish saddle where you’re faced with a sudden scattering of bulbous boulders that look airlifted straight out of Joshua Tree National Park. For even more distraction, you now have a better view of the pine-topped ridgelines of the San Bernardino National Forest to the west. Not too shabby! 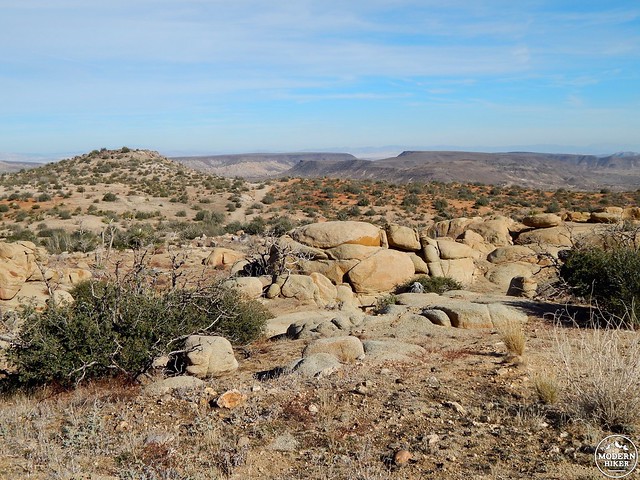 Keep walking, and you’ll end up in the middle of those awesome boulders you spotted a few minutes before, and you’ll notice that your views are even better than before, which is one of the best parts of this trail – the vistas just don’t quit!

At 1.4 miles, it will look as though the trail continues to your left around a bend, but if you’re paying attention, you’ll see that the rock-lined path actually continues uphill to the right, marked by a wooden post and a bit of modern rock art. This section of trail will seem a bit steeper than what you’ve done so far – it’s a great place to bust out your trekking poles if you haven’t already. 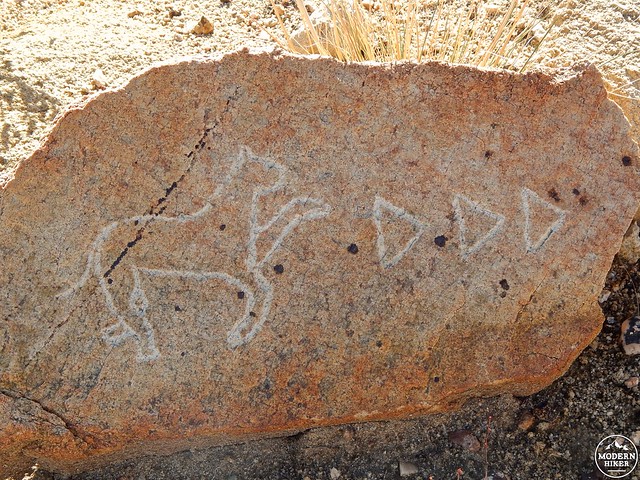 After winding through some more jumbled boulders, you’ll begin to head downhill around 1.6 miles into an area where you can really see the effects of the Sawtooth Complex fire, a massive lightning-sparked inferno that devastated the area in 2006. While the scars of the burn are apparent in the blackened soil and mangled skeletons of pinyons and junipers, there is also a lot of beauty to find here. The contrast of the dark char, red soil, and green chaparral is startling at times, but also stunning. In the regrowth, you might also spot some tiny wildflowers that serve as a reminder that nature will always find a way. Do note that because of the fire damage, it’s incredibly important to stay on trail in order to minimize erosion. 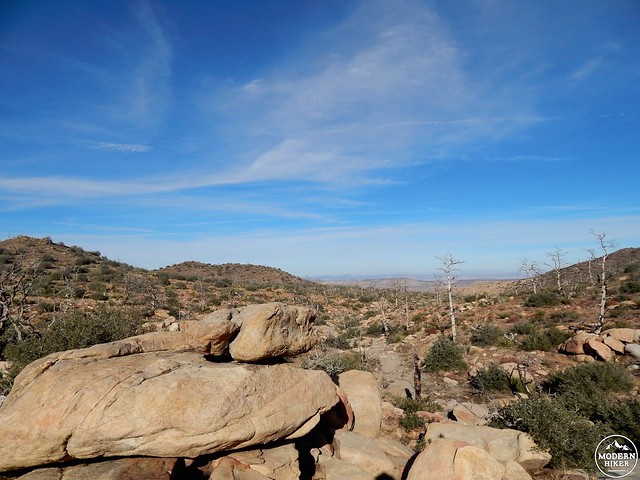 You’ll start heading uphill again at around 1.9 miles, crossing a sandy streambed shortly thereafter. About 0.4 miles further, you’ll reach a marked junction with the Indian Loop trail (currently closed for reconstruction), which heads right, eventually dropping down into Pipes Canyon. Instead, you’ll continue straight on your journey to Chaparrosa Peak.

Just after this junction, you’ll cross another wide, sandy streambed, which you’ll re-cross a few moments later. During this second crossing, you’ll see a jumble of small boulders over to your left – after a heavy rain, this area is transformed into a small waterfall! Resist the urge to scamper up these rocks and instead, continue straight on the trail until you reach a sandy wash at 2.5 miles. Enjoy the soft ground as you walk straight until reaching a bit of a boulder barricade – here, the rock-lined trail will actually curve uphill to your left. 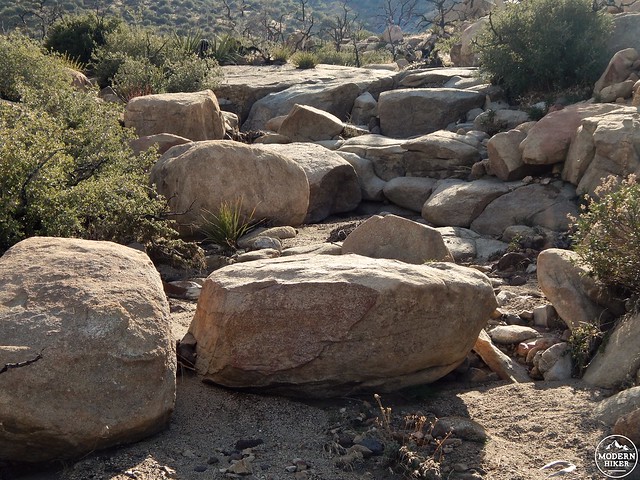 As you head up from the wash, tucked once more in a maze of huge boulders, you’ll notice a pointy peak to the west. Don’t get too excited quite yet; this isn’t your mountain…but you’re definitely getting closer! In this final push, make sure you aren’t too summit-fevered to notice the ground morph under your feet into a beautiful mosaic of red, black, white, and sparkly pink volcanic rock. 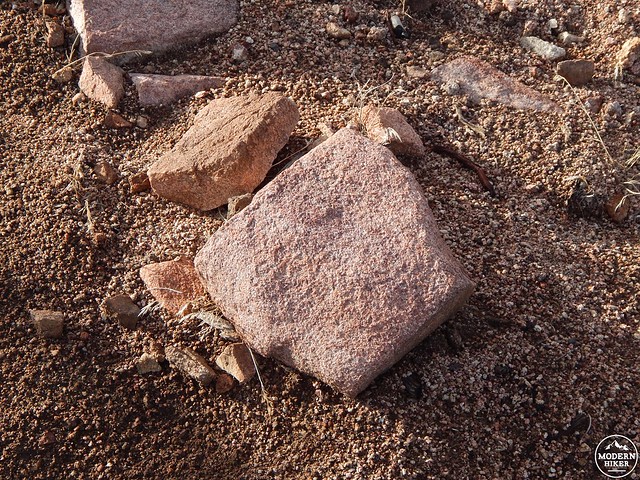 At 2.9 miles, you’ll pass around that first pointy peak and your destination is finally in view! Carefully switchback up a soft mound of pink rock and red dirt, until you curve around to reach the summit of Chaparrosa Peak at 3.1 miles, where you’ll find an official USGS marker and a register. The views from here are outstanding. The mesas, the Sawtooths, the San Bernardinos, sand, rocks, pine trees – even Mount San Jacinto on the other side of San Gorgonio Pass. It’s all here! 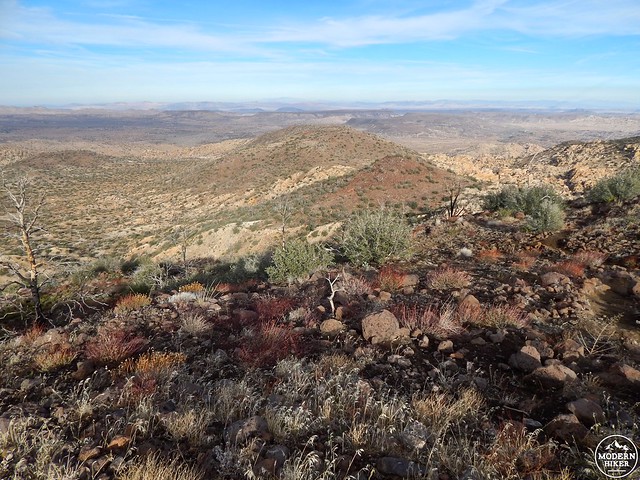 The summit itself has a fairly broad shoulder, so there’s plenty of room to get cozy for a while and enjoy your surroundings. Dance, meditate, eat some lunch, laugh, cry, sing, howl at the moon – it’s a special place, so make sure you leave plenty of time to enjoy it. Once you’re done howling enjoying the views, head back the way you came, and perhaps consider making a pit stop at Pioneertown institution Pappy & Harriet’s for some chow and a cold beverage on your way back home. 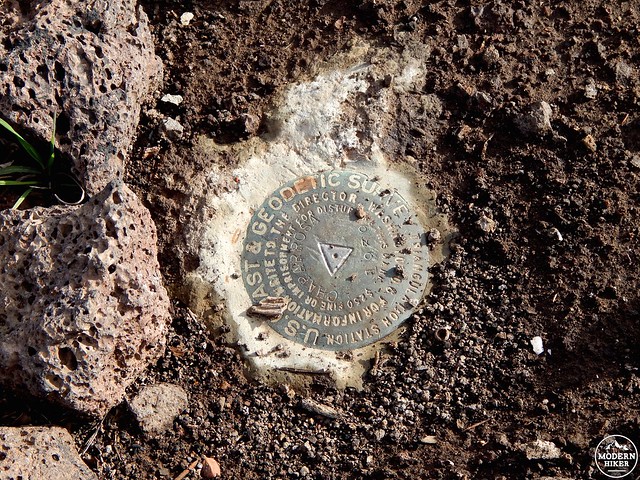 Good, although it can be slightly tricky to follow at times if you’re not paying attention, due to the desert landscape and fire erosion. The trail is often lined with rocks in more confusing terrain, but it’s always a good idea to look behind as you’re ascending, so you know what to keep an eye out for on the way back.

Camping is not allowed at the preserve; the closest campground is Black Rock Campground in Joshua Tree National Park.

In Yucca Valley, turn north onto Pioneertown Road, then head about 7.5 miles and hang a left onto Pipes Canyon Road, which is signed for the preserve. The road here is dirt, but it’s well graded, so it shouldn’t pose a problem for passenger cars. A fork in the road (Pipes Road) points right towards the preserve; from here, the road becomes a bit narrower, so drive slowly as you watch for other cars. The road ends at the preserve; park in the signed visitor lot on your left.

You might try reaching out to someone at the Wildlands Conservancy - they have a pretty deep history in the area, so might know a bit more.

While hiking Chaparraso Peak trail a friend found rock carvings that look like cattle brands. I do research for the Morongo Basin Historical Society and am trying to research these carvings. They are carved on a dark rock somewhere close to the trail. One looks like a C over a key. There was a man named Corky Kee from the Kee Ranch close by so this is probably his cattle brand.
Another one looks like a JA or JR and is circled. I don't have any ideas yet about this one.
Also, there is a carving on the same rock that looks like the head of a steer.
If you have any information on this I would appreciate it if you email me anything you have.
Thanks, Steve Hanson

I was just there it is still closed. However, the hike was awesome. The views and nobody was going up or down, I did not see a soul.

Woooohooooo - that is excellent news! Going to have to get back out there once it cools off to get the full loop experience :)