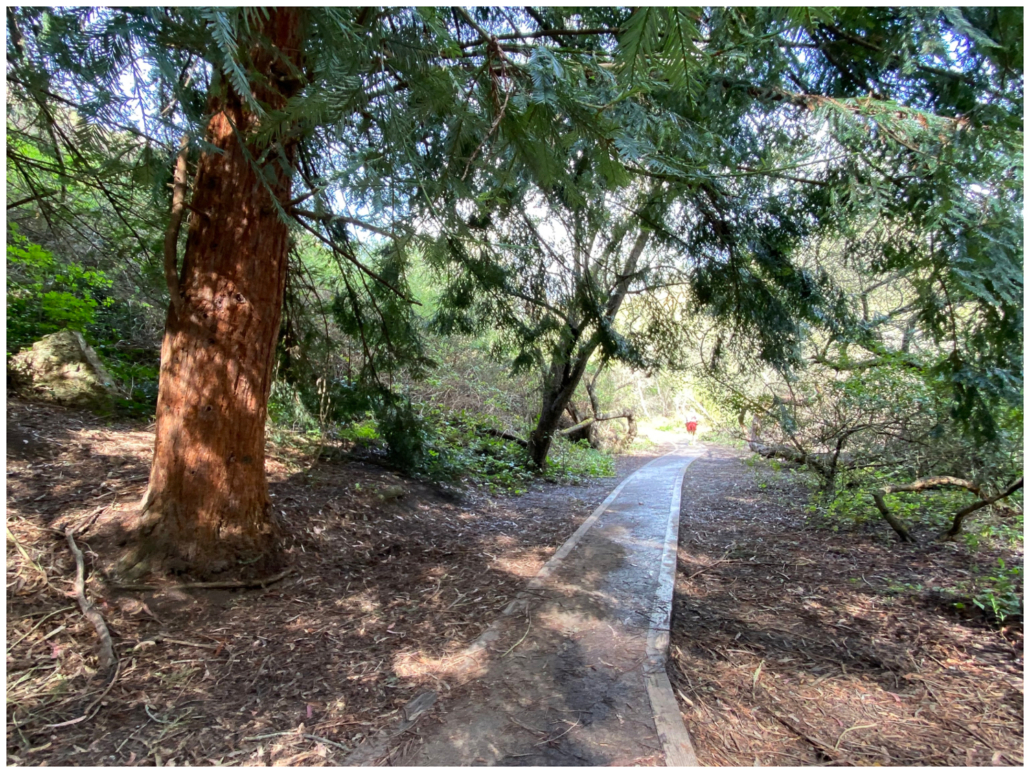 Start your hike at the Elk Street and Chenery Street entrance in Glen Canyon Park. Right in front you, a historical landmark marks the site of America’s first dynamite factory in 1868, tracing its roots to Alfred Nobel of the Nobel Peace Prizes. To your left are grassy baseball fields and to the right is a children’s playground. Follow the paved walkway past the Recreation Center on your right. 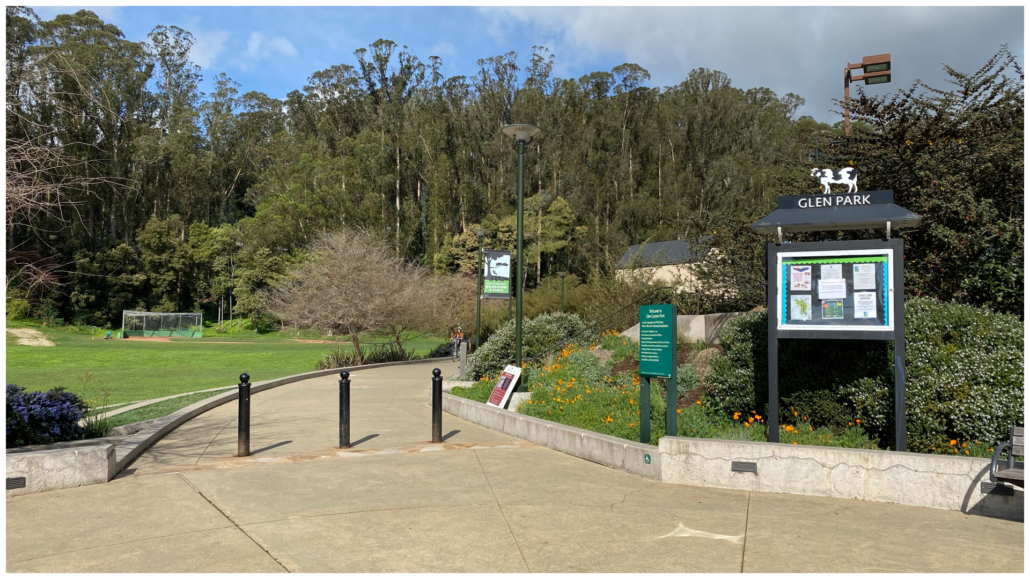 Glen Canyon Park is a 66.6-acre Significant Natural Resource Area that supports coyotes, salamanders, banana slugs, great horned owls, red-tailed hawks, and song sparrows. Islais Creek cuts through the middle of the park, a rare, open channel creek in San Francisco. Moisture-loving plants like willows and redwoods grow near Islais Creek. Along the upper parts of the canyon are grasslands and coastal scrub. Franciscan chert outcroppings stick out like bony plates along a stegosaurus’s back. 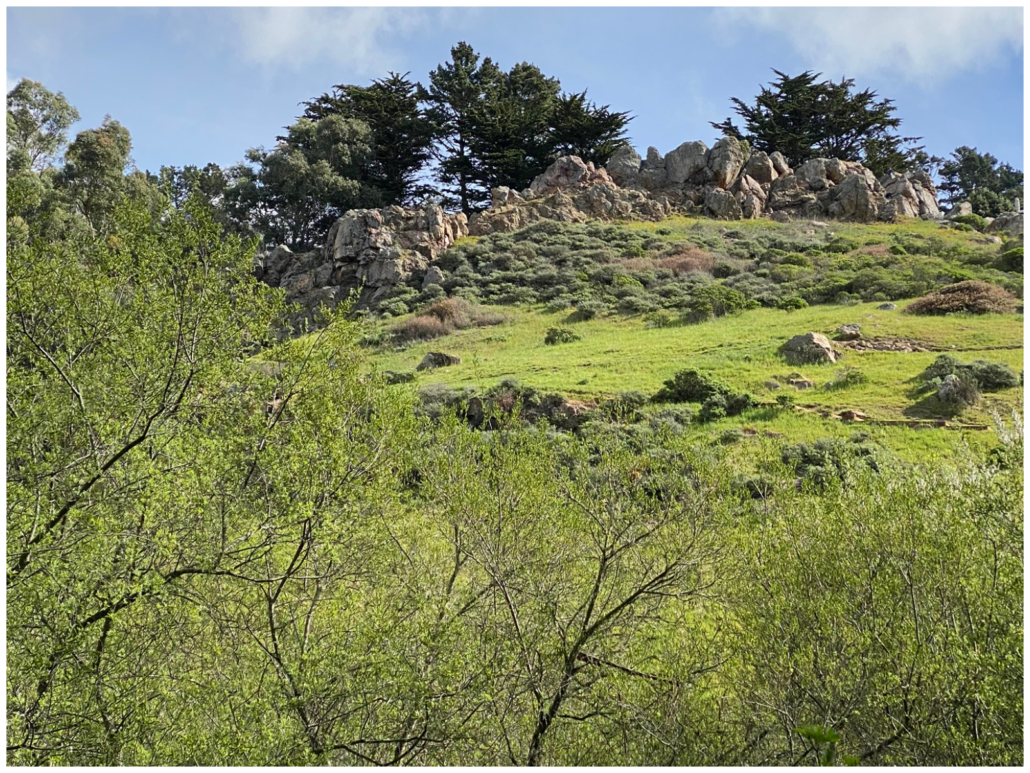 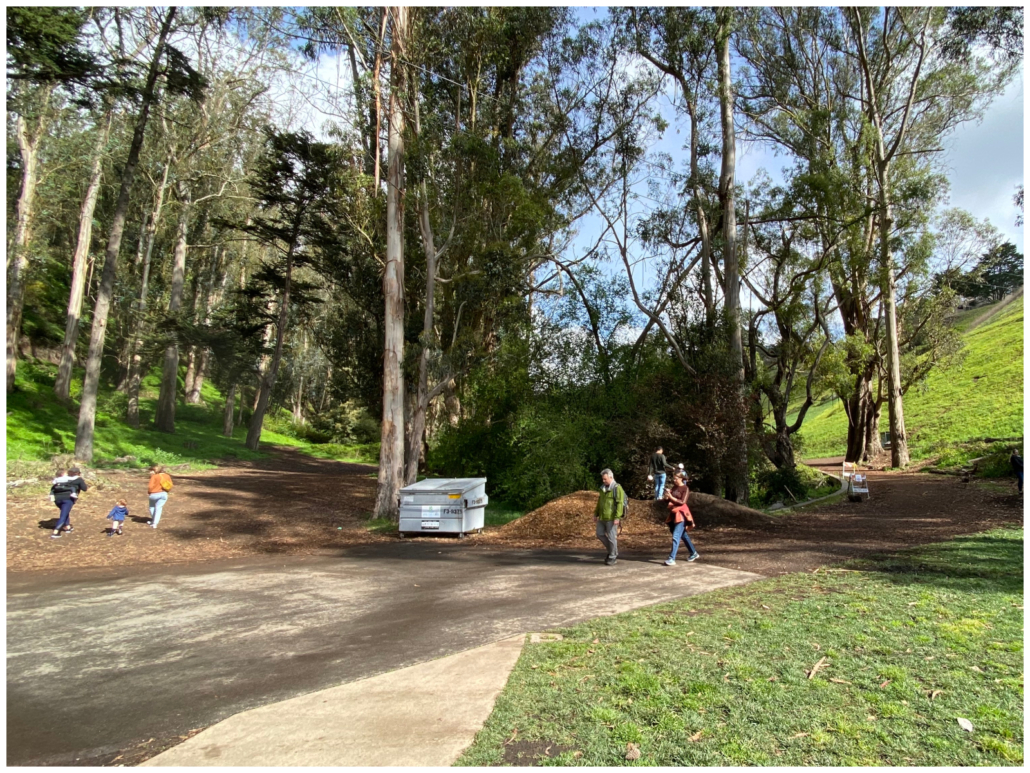 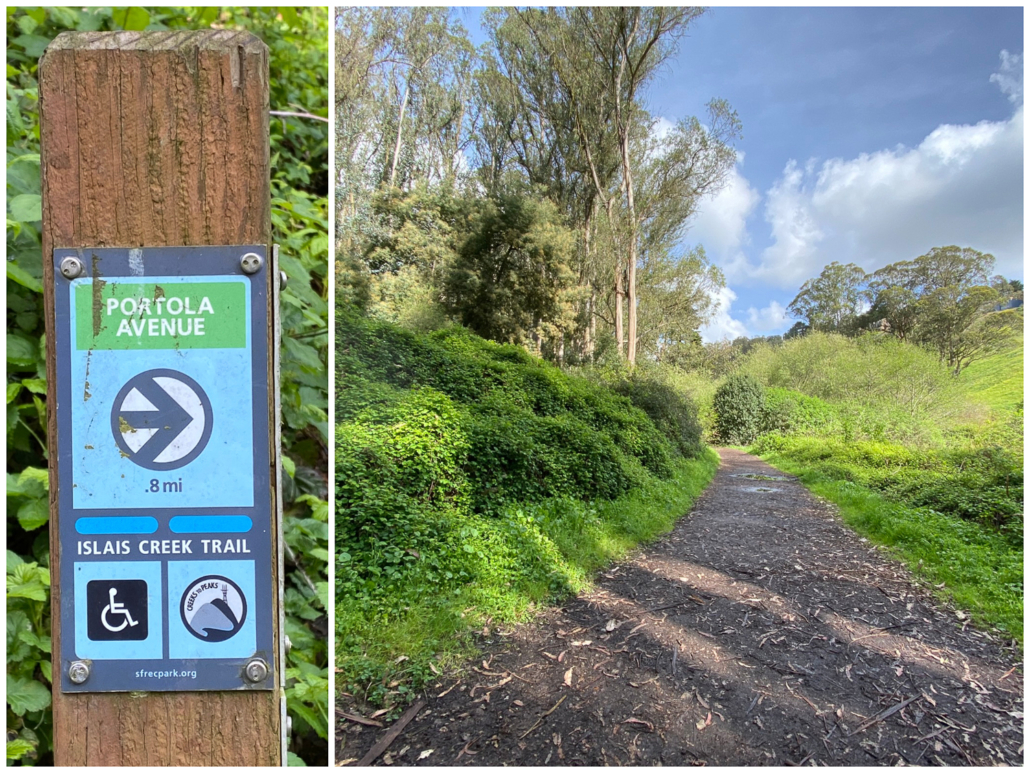 The dirt trail enters the forest to trilling birds and the low, trickling creek astride tall eucalyptus. Pass the Glenridge Cooperative Nursery School on your left. Across the creek, you can see runners and hikers on the Gum Tree Girls Trail. 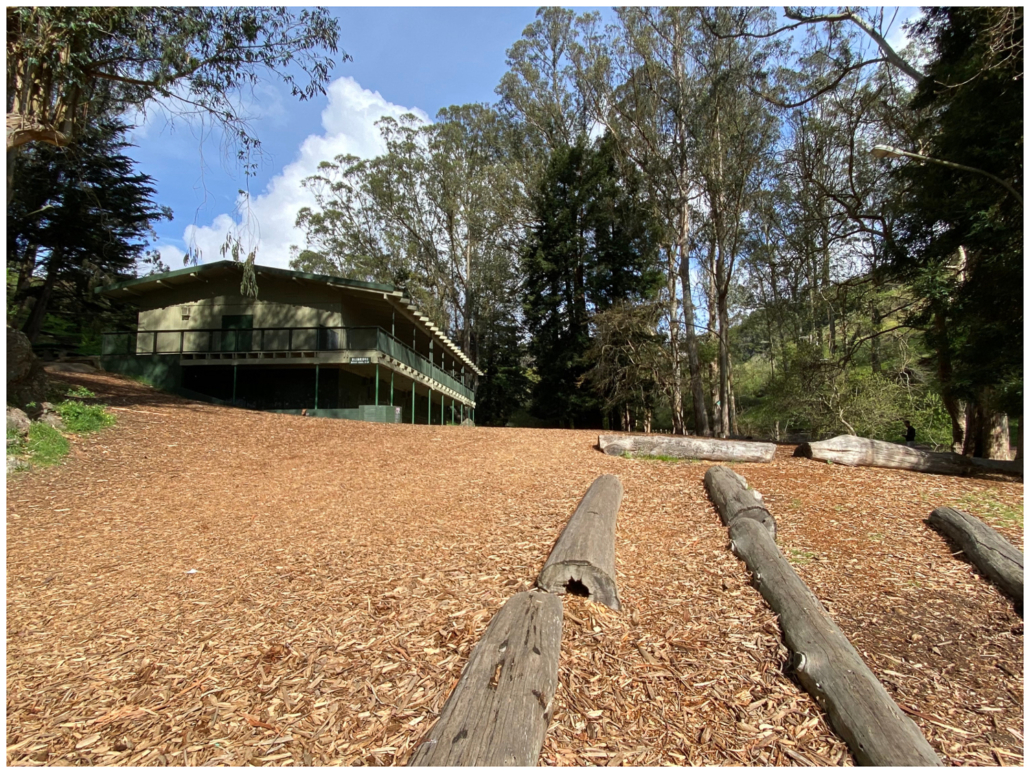 At the 0.6-mile mark, turn left to stay on the Islais Creek Trail towards Portola Drive. To the right is an optional return route on the Gum Tree Girls Trail. Re-entering the forest, it feels like you have left the city behind entirely, transported to a forest rich in tangled trees, ferns, and blackberry vines. 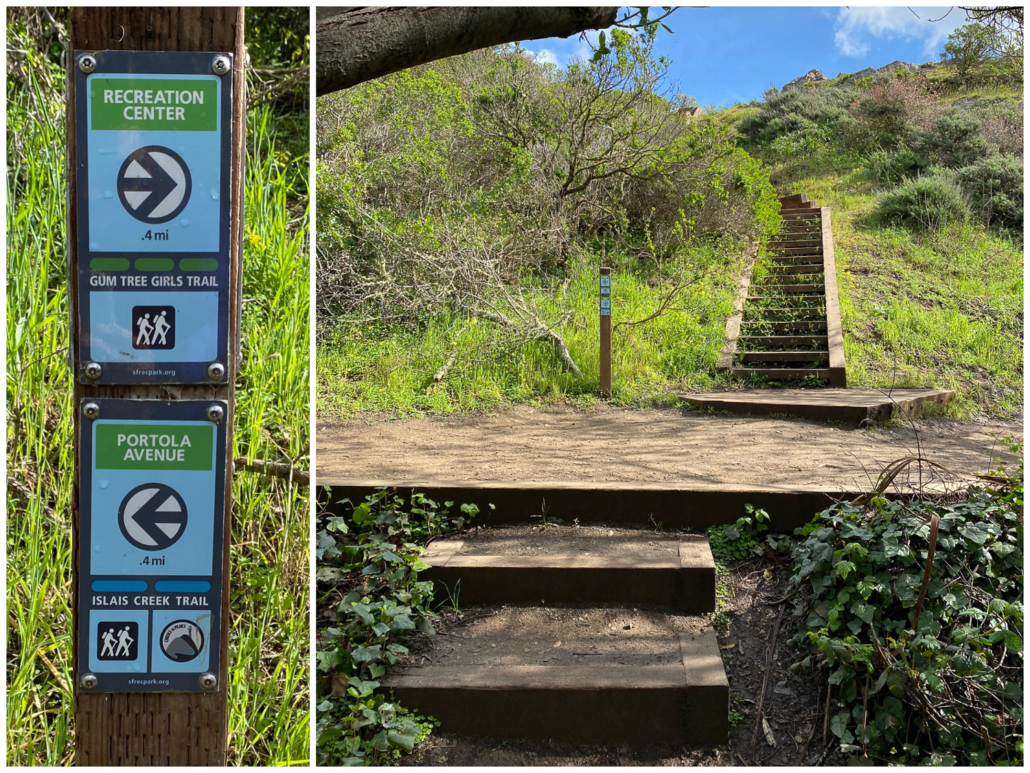 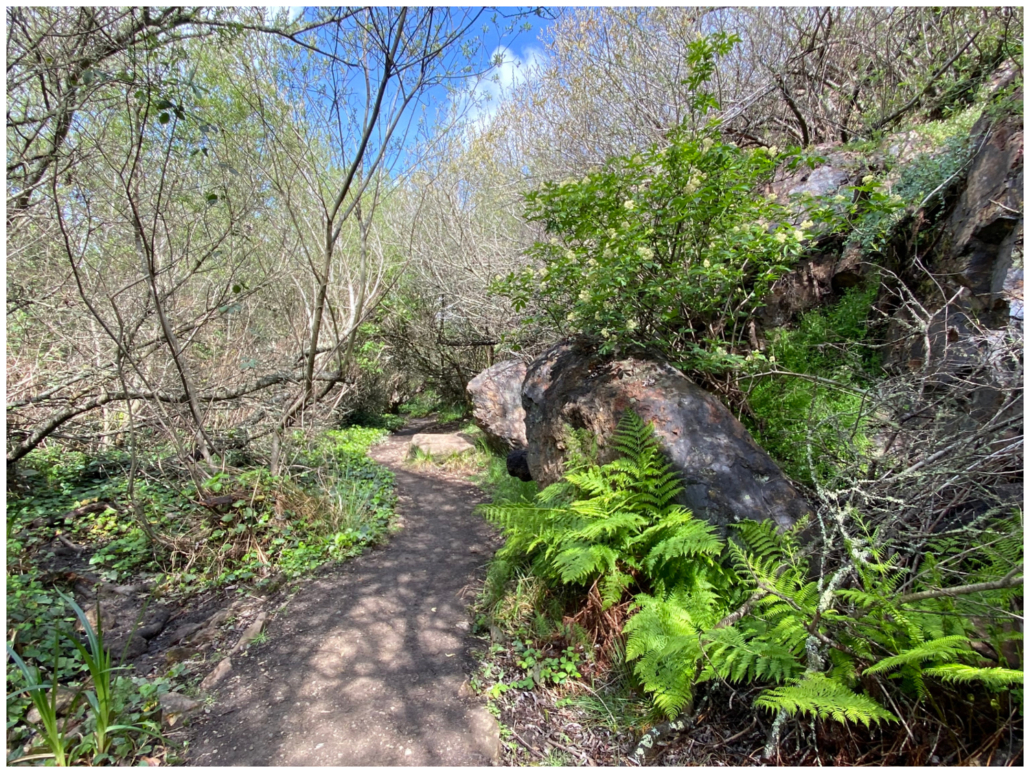 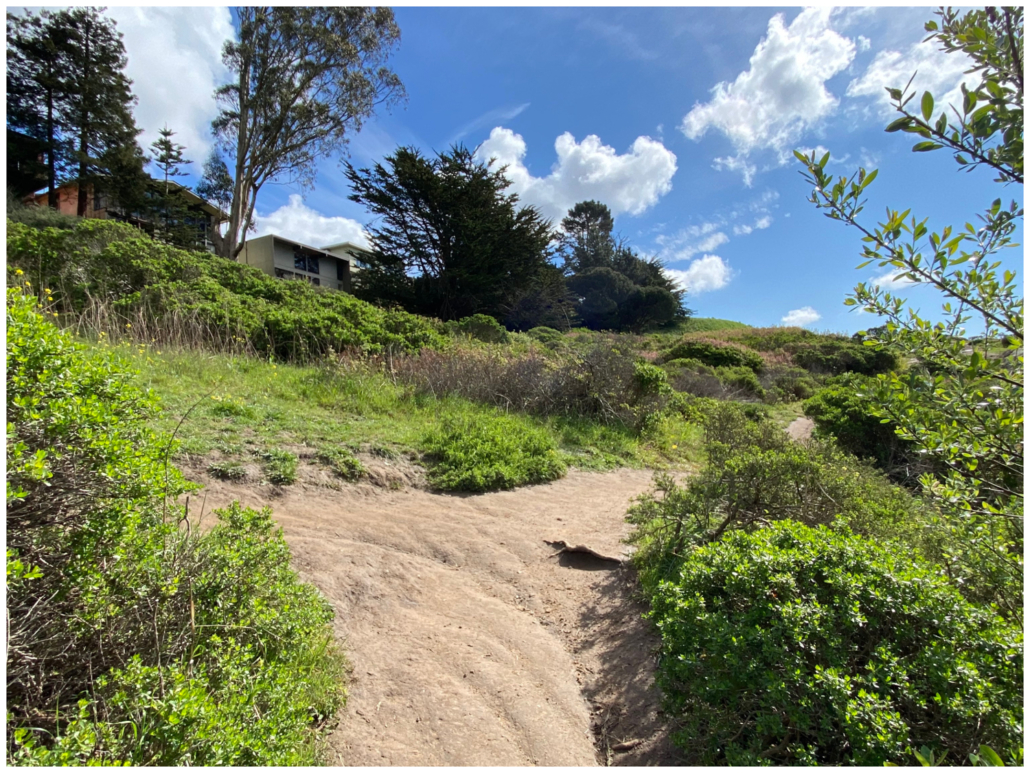 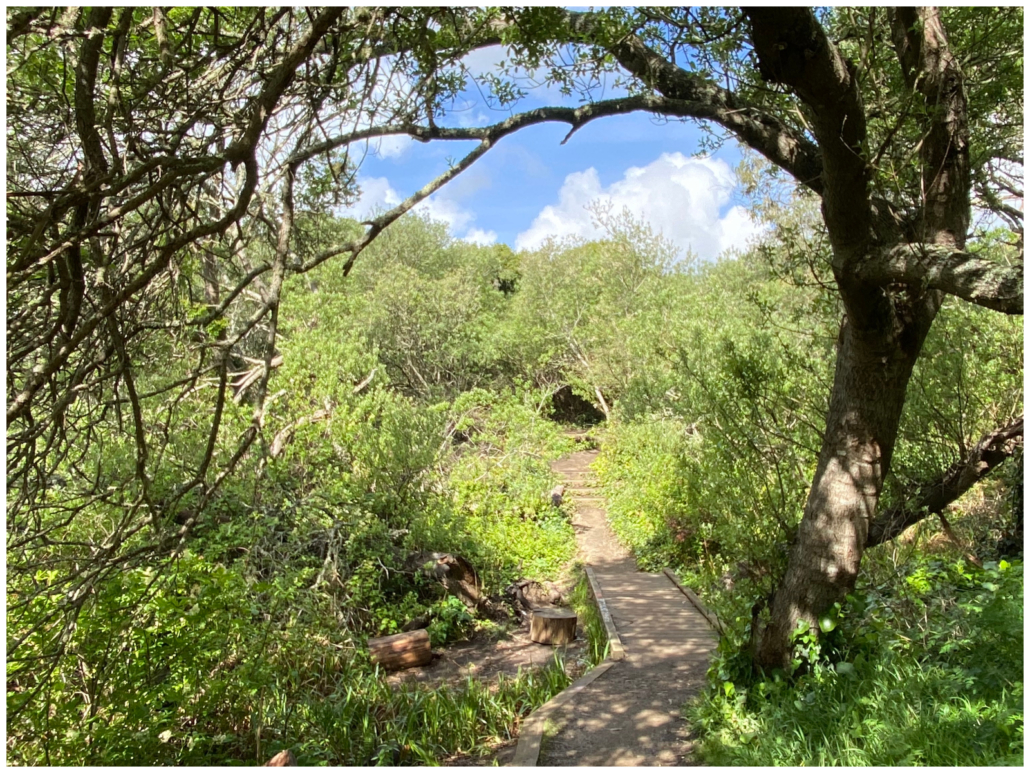 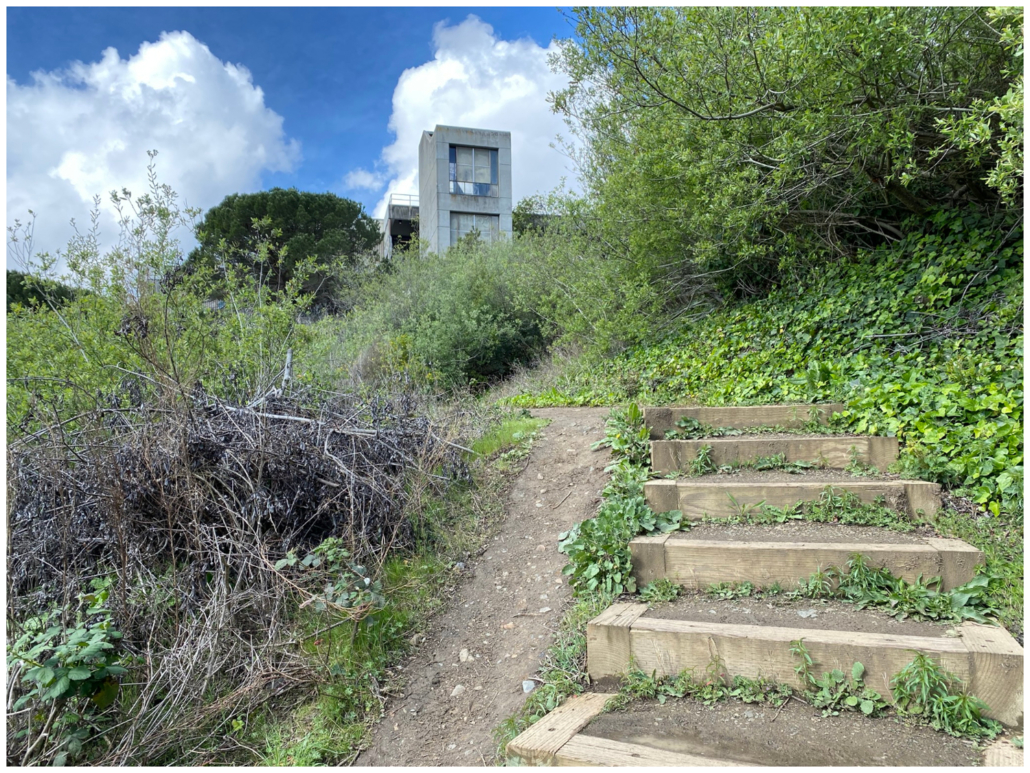 This particular section—where the box steps are—was one of more challenging areas to clear for the Creeks to Peaks Trail to become a reality. In July 2015, volunteers with Volunteers for Outdoor California spent three full days in Glen Canyon Park widening trails, pruning trees, and clearing out brush. Because of their hard work, along with the San Francisco Recreation and Parks Department and neighborhood volunteers, visitors can hike directly through Glen Canyon Park to Twin Peaks.

At 1.0 miles, reach the end of the Islais Creek Trail at Portola Drive. At the stoplight, take the crosswalk across Portola and then turn left, following the sidewalk for 0.2 miles towards Twin Peaks. 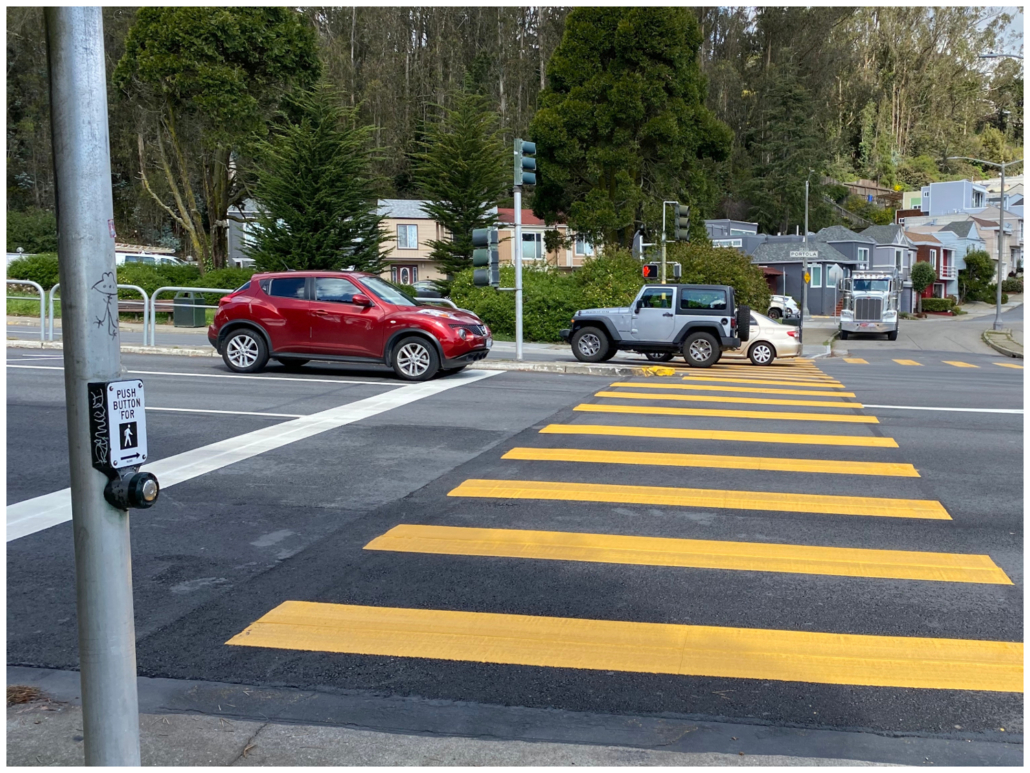 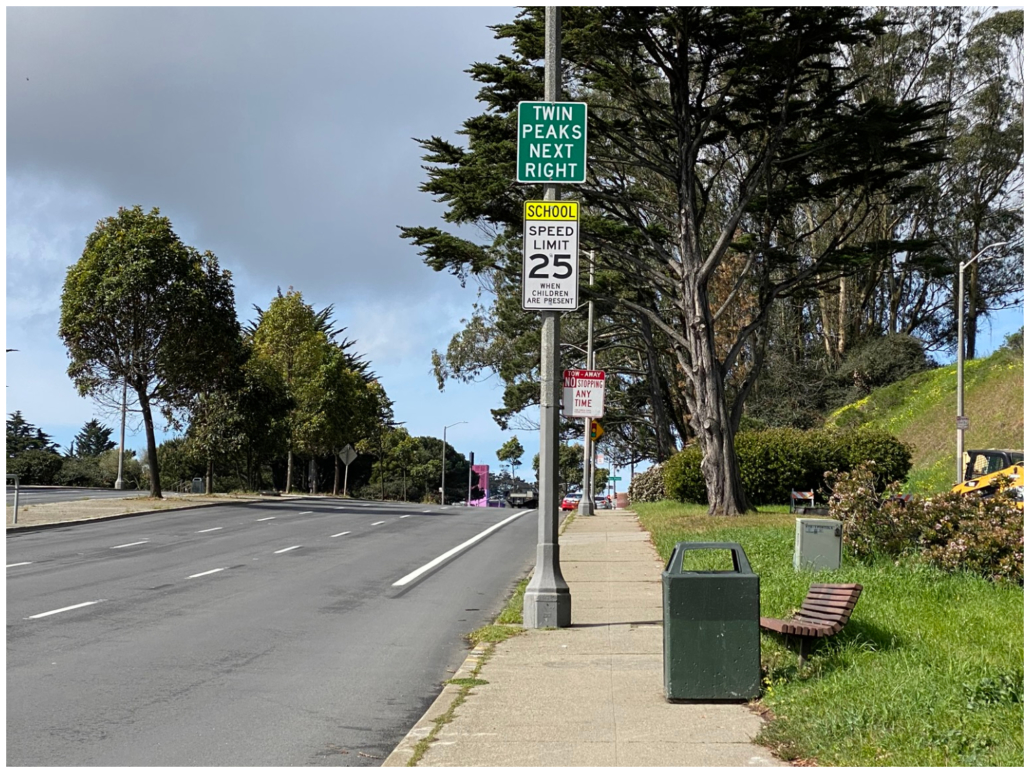 Make a sharp right at Twin Peaks Boulevard onto a narrow dirt path, heading north towards Christmas Tree Point Overlook. The path climbs next to a guardrail overlooking Glenview Drive and fragrant blueblossom. Cyclists climb up and down this popular feeder road to Twin Peaks. 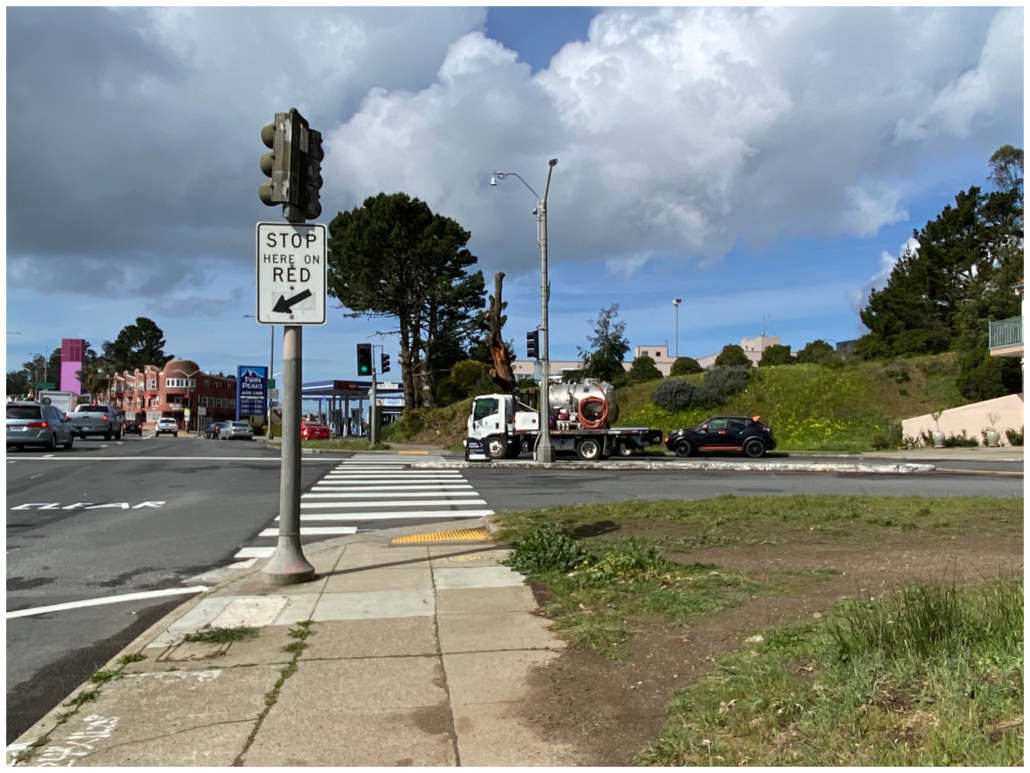 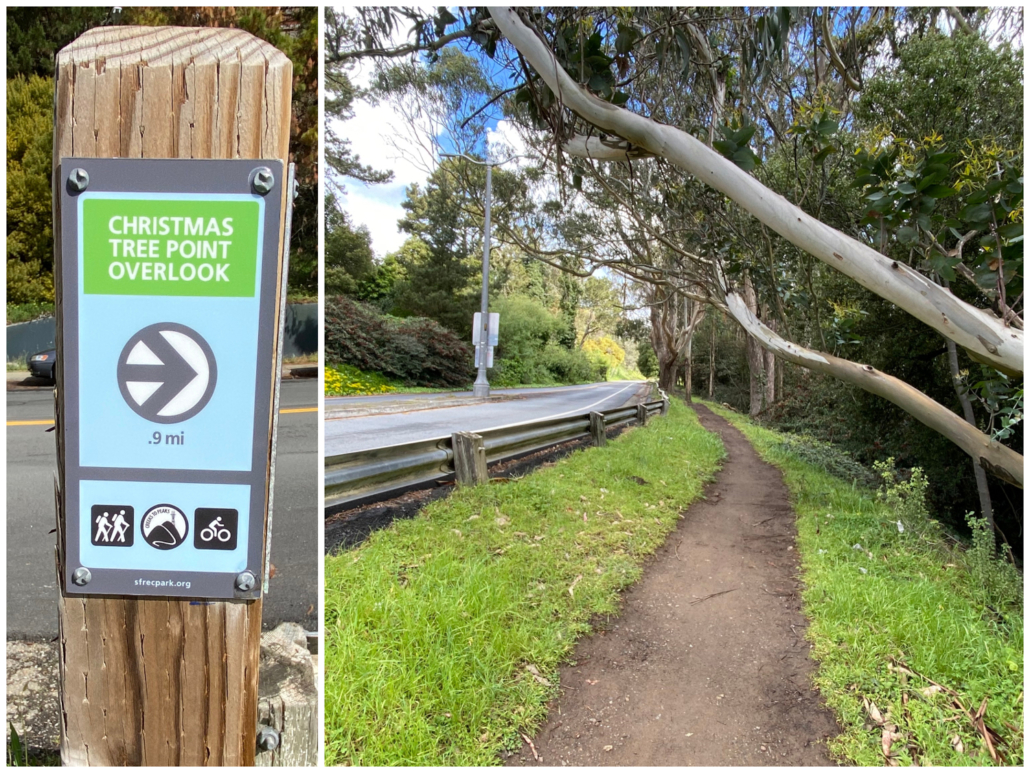 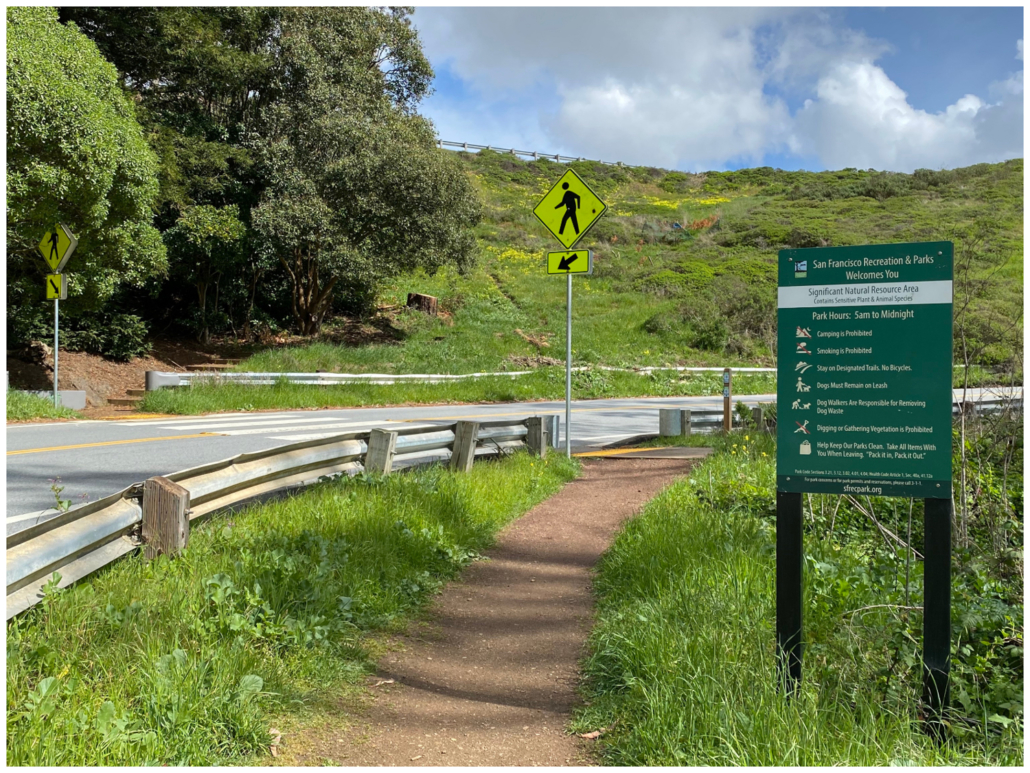 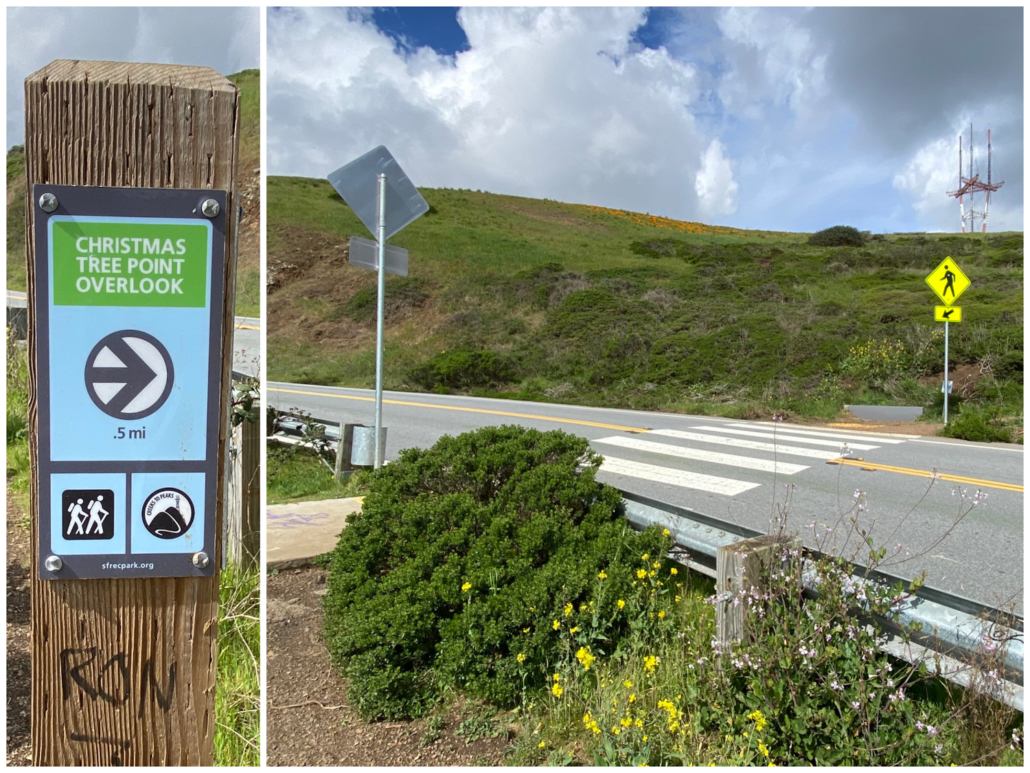 The Sutro Tower peaks up above the second pedestrian crosswalk

At 1.7 miles, arrive at the base of Twin Peaks on your right. A concrete barrier blocks cars from entering this space, creating a pedestrian-friendly zone on the eastern side of the peaks. Many sources say that Spanish settlers used to call Twin Peaks “Los Pechos de la Chola,” meaning “Breasts of the Indian Girl.” However, Erwin G. Gudde, author of California Place Names, suggests a less prurient nickname:

“In Spanish times, the name was Las Papas, ‘the potatoes’; on Beechey’s map (1828) and on some other non-Spanish maps, the peaks are labeled Paps, but the charts of the Coast Survey have Las Papas. Another Spanish name, Los Pechos de la Chola, ‘the breasts of the Indian girl,’ probably owes its origin to American romanticism.” 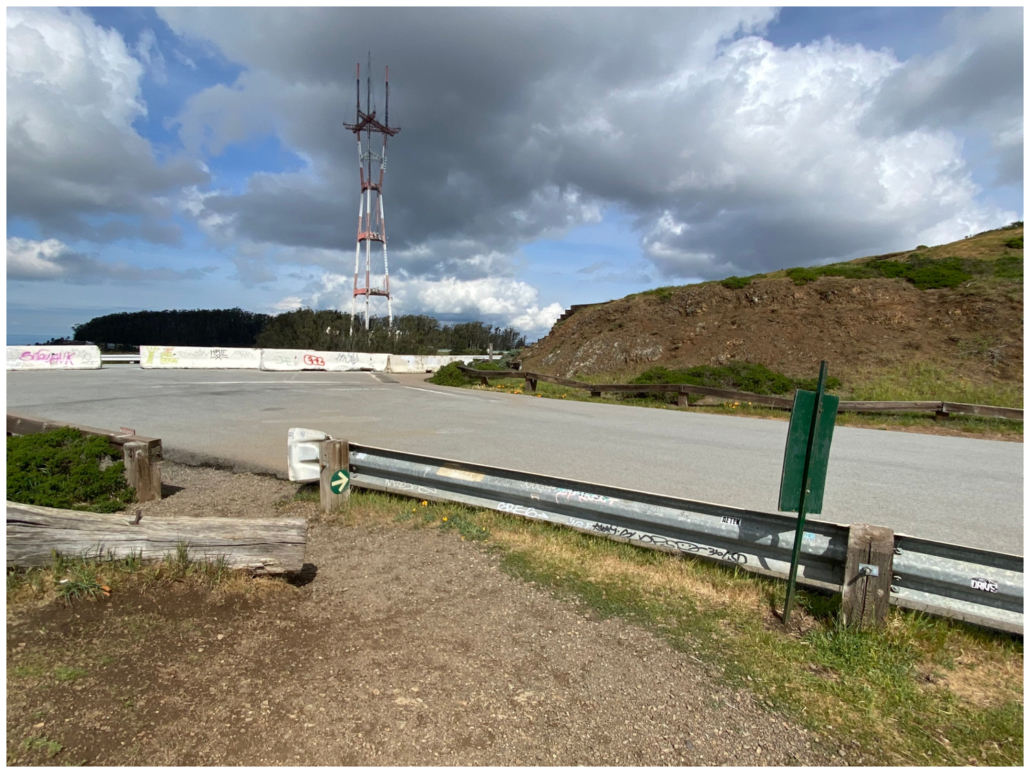 Cross the road and climb 70 feet to Noe Peak, the southernmost of the Twin Peaks. Patches of lupine and poppies scatter along the hillsides in spring. At the top is a partial view of downtown San Francisco, the Golden Gate Bridge, and Mount Tamalpais. The San Francisco Bay stretches south towards the San Mateo Bridge. Behind you, to the right, is Mount Davidson and on the left is San Bruno Mountain. At 922 feet, Twin Peaks are the second highest point in San Francisco after Mount Davidson. 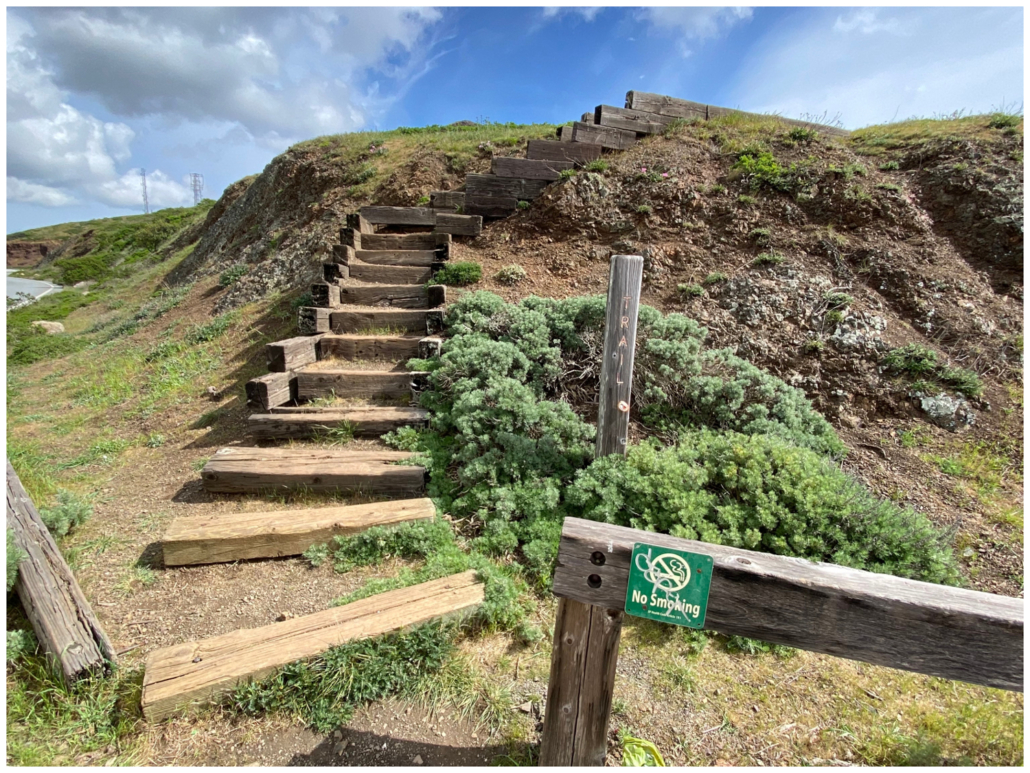 Wooden steps lead to Noe Peak, the southernmost of the Twin Peaks. 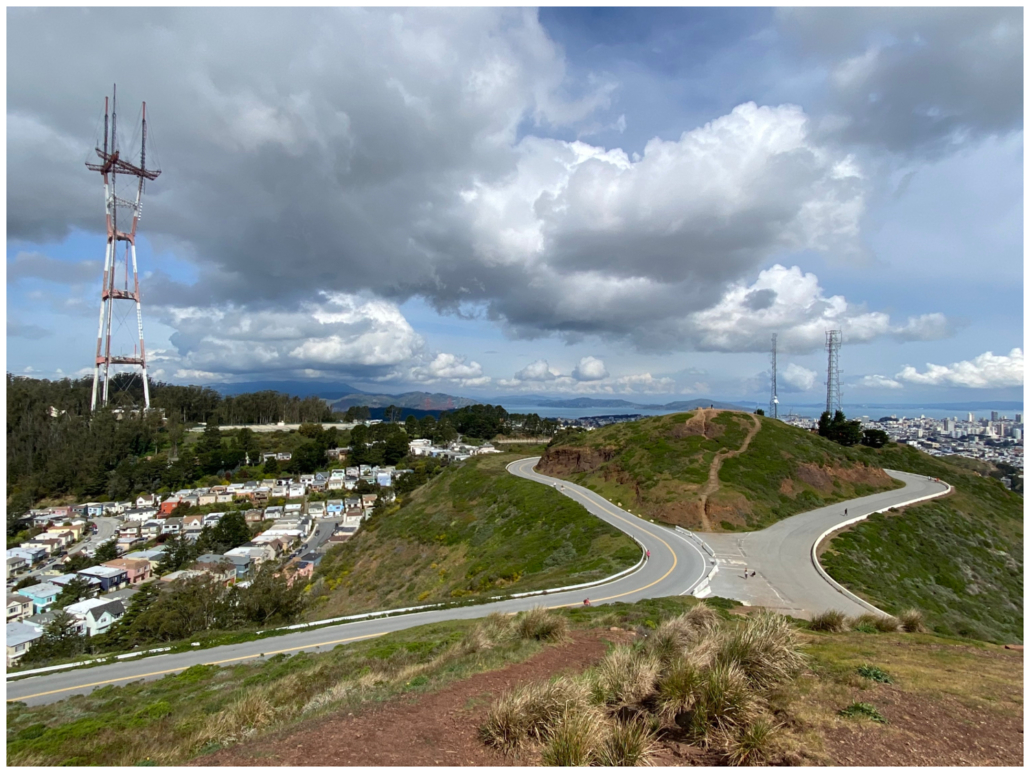 Descend the northern side of Noe Peak towards Eureka Peak. The vista here is similar to Noe Peak, the main difference that you can see the Golden Gate Bridge, Alcatraz, and downtown San Francisco a bit better. A wide dirt shoulder leads north beside orange buildings towards Christmas Tree Point Overlook. 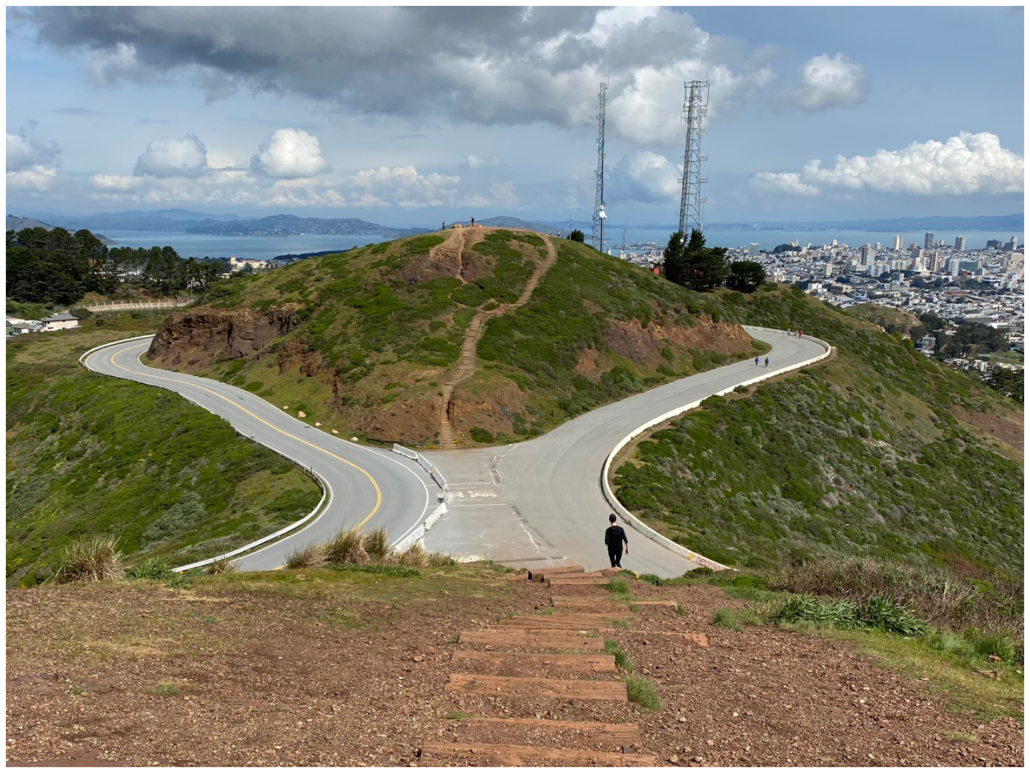 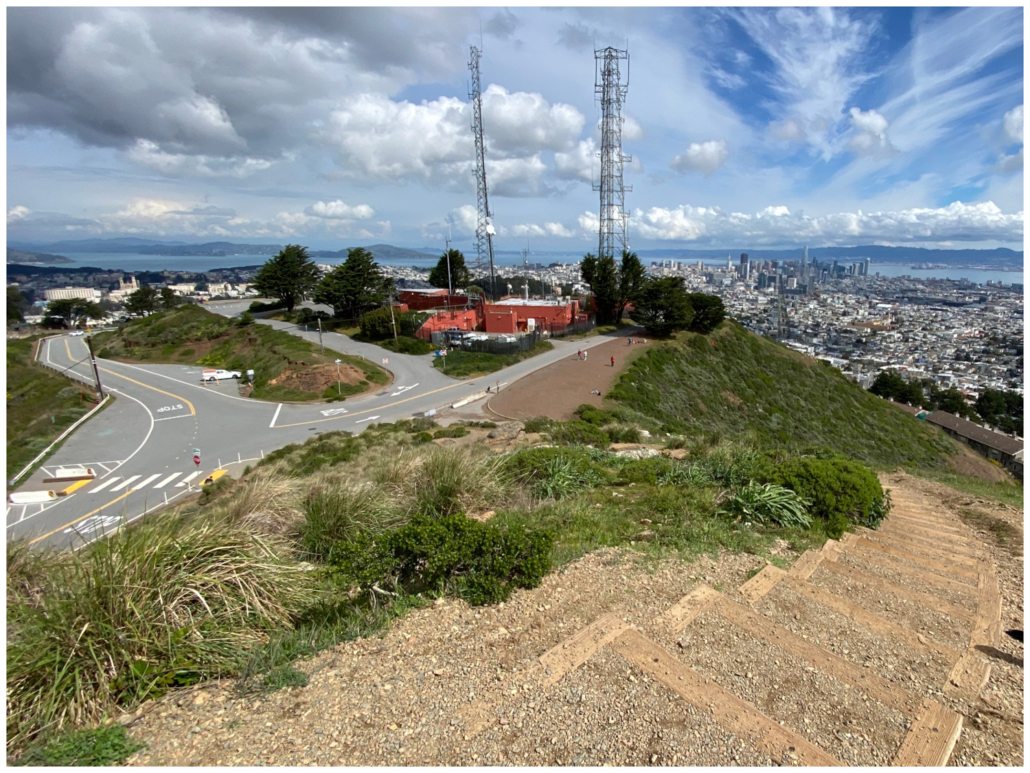 After descending Eureka Peak, walk north to Christmas Tree Point Overlook. At just over 2.0 miles from the trailhead, you have arrived at your “summit,” a 180-degree view of San Francisco. As you gaze out at the northern tip of the peninsula, it is easy to see why the view is so popular. Looking northwest, you have Golden Gate Park, the Golden Gate Bridge, and The Presidio. To the north are Angel Island and Alcatraz. Market Street acts like a leading line, drawing your eyes northeast to downtown San Francisco. To the east are Mount Diablo and the Diablo Range. Since you can drive to the overlook, you will see cars and lots of visitors milling around. Telescopes offer magnified views for 50 cents (bring two quarters). 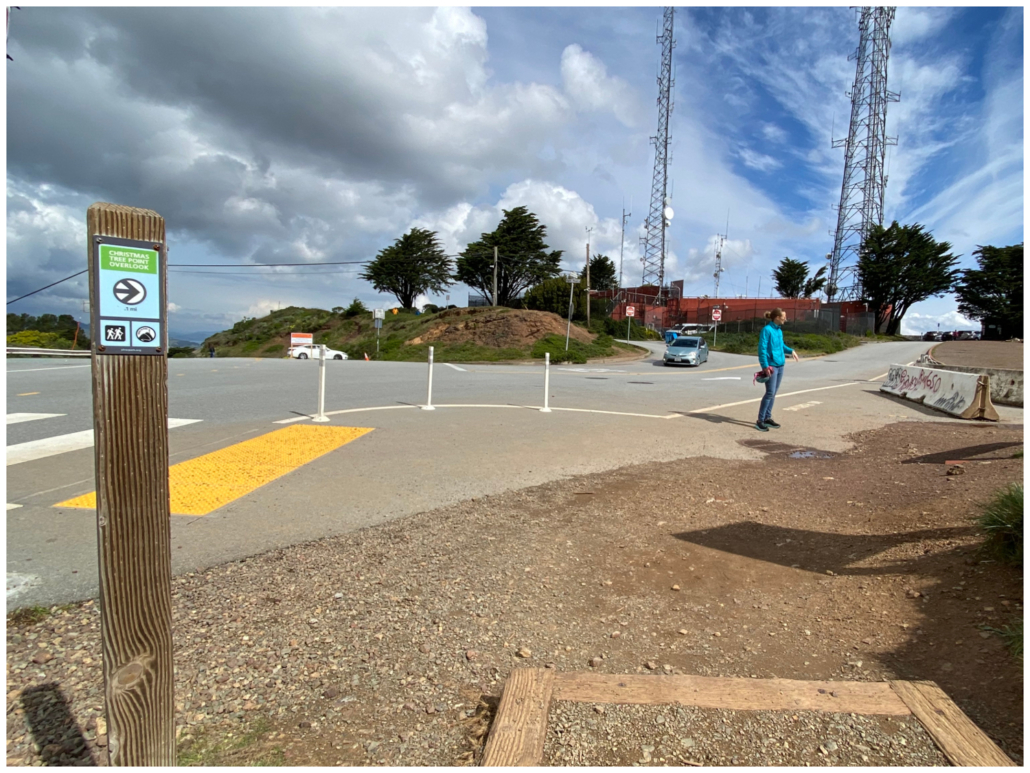 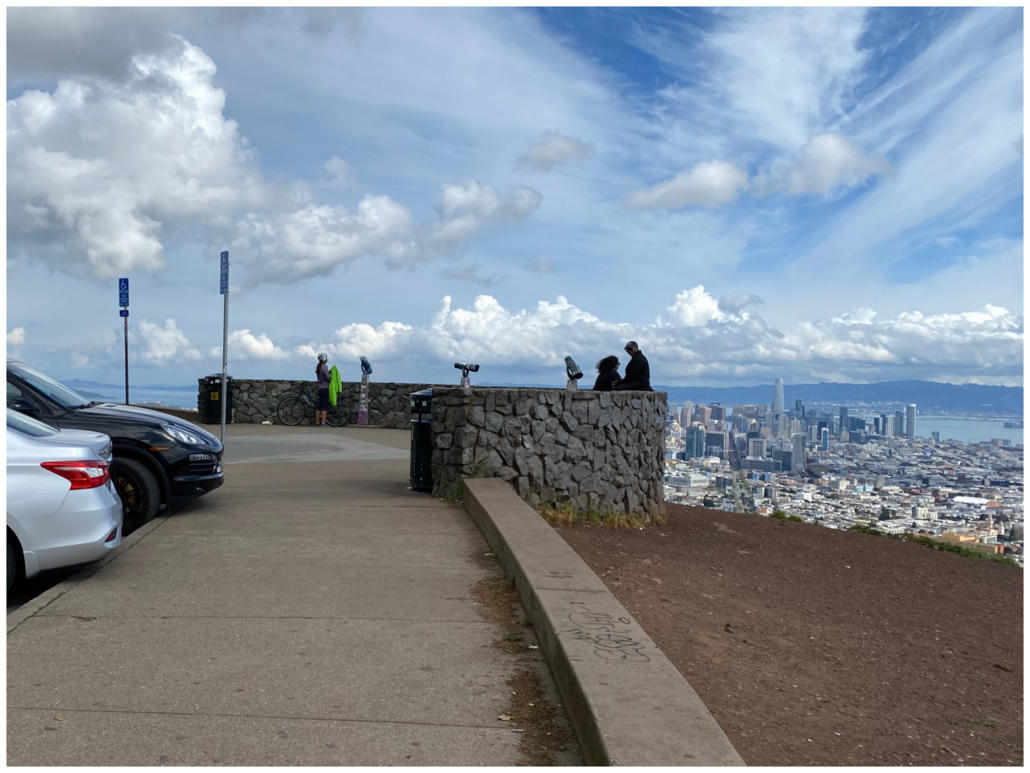 When ready, retrace your steps to Portola Drive and the Rec Center. One option on the way back is to take the Gum Tree Girls Trail at roughly the 3.5-mile mark. The name “Gum Tree Girls” dates back to the 1960’s. San Francisco City Engineer Clifford Geertz was not happy about a group of women fighting to preserve Glen Canyon Park from freeway development. He called the women—Zoanne Theriault Nordstrom, Joan Seiwald, and Geri Arkush—the Gum Tree Girls after the prolifically growing blue gum eucalyptus in the park. Although meant as an insult, the women took it in stride: “Oh that’s a great name!” Their efforts paid off as the freeway plan ultimately fell through in 1970. In 2014, SFRPD renamed Alms Road the Gum Tree Girls Trail to honor the women who helped preserve it. 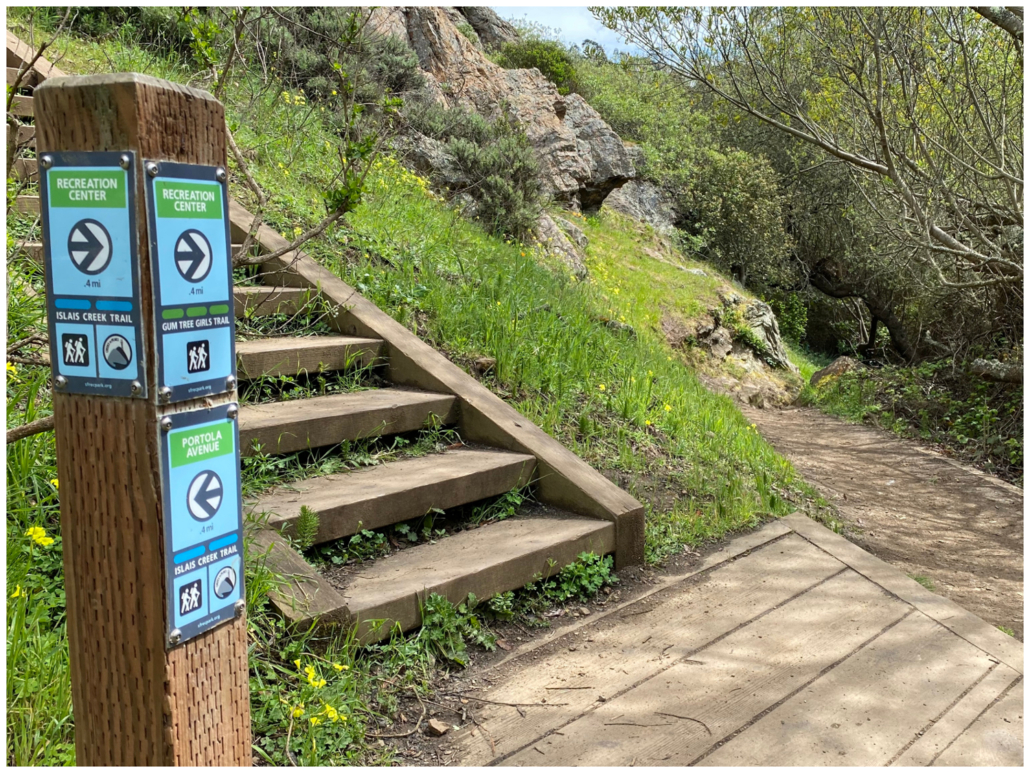 Before you go, be sure to check the accessibility of the road to Twin Peaks, too.

Creeks to Peaks is a well-signed urban trail from Glen Canyon Park to Christmas Tree Point. The route connects two green spaces on a mixture of asphalt sidewalks, wooden boardwalks, box steps, and dirt trails. It is moderately steep in places. Twin Peaks can have fog and wind, and the trails in Glen Canyon Park can be muddy after recent rains.